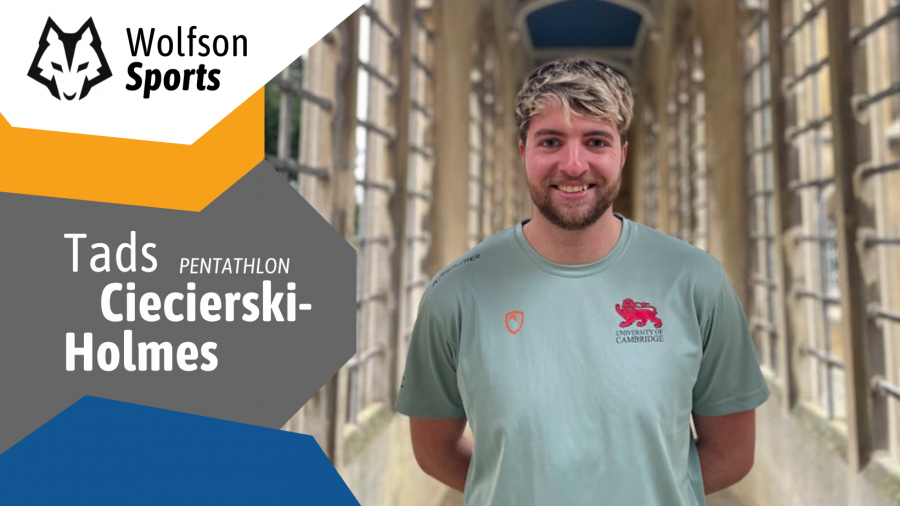 In a brilliant sporting achievement, Tadeusz Ciecierski-Holmes ranked first out of all male student-athletes from Cambridge this year after his gold medal at the BUCS Modern Pentathlon Championships.

Tads started pentathlon as a first-year undergraduate in Cambridge in 2017. Now back for a degree in Graduate-Entry Medicine at Wolfson College, he is currently president of the Cambridge pentathlon club and coaches both swimming and shooting.

In March 2022, Tads triumphed over his competitors to win gold in the British Universities and Colleges Sport (BUCS) tournament for Modern Pentathlon, which combines five Olympic sports including running, swimming, shooting, fencing and showjumping. Earning a grand total of 12 BUCS points across these events placed him in the top-ranked spot of male athletes sent to BUCS from Cambridge this year.

What is Modern Pentathlon, and where does the idea for competing across five events come from?

The sport is the modern rendition of the pentathlon of Ancient Greece – an event that tested the skills thought to be useful in ancient battles, such as javelin-throwing and wrestling. The ethos is the same in the modern event: all the events are skills that are absolutely necessary for an (early 20th Century) cavalry officer to have when inevitably stuck behind enemy lines. You have to be able to fight off the enemy with a sword and pistol, mount an unfamiliar horse, run cross country, and swim across rivers back to safety.

For those who aren’t familiar with BUCS tournaments, what’s the competition like?

BUCS events are an accessible way for University sports club members to challenge themselves against competitors from across the UK. So there is usually a wide range of skill levels, from those who have just picked up pentathlon this year and want to compete, to members of the Pentathlon GB squad who train at the University of Bath. It's a great competition for supporting newer members of the club while providing a chance for the Blue's squad to test their muscle a few weeks before the Varsity Match. It's great fun spending a day competing with the team, but as with all pentathlon competitions - it's absolutely exhausting completing multiple events in a short space of time.

How did it feel to win gold? Did it take a lot of preparation?

It was a bit of a surprise. A lot of things had to go my way on the day - there was definitely a lot of luck involved. It took a lot of training since I started pentathlon to get to this point, with constant incremental improvements in all the events. My horse-riding has improved drastically over the years, having started as a complete beginner rider when I started university, though I still have a lot to learn. Showjumping is the one event where I am most proud of my progress. Overall, I have really put the hours in over the past year in all the five sports since returning to Cambridge, and it paid off.

How do you feel about ranking first out of the Cambridge male athletes, earning the most points for the University at BUCS this year?

Again, it's quite a surprise! There are many ways of measuring athletic performance, with BUCS points being just one metric. There are many Cambridge athletes and teams that have performed brilliantly at BUCS and other competitions. I do feel proud to represent the Pentathlon Club in this achievement.

It's been an amazing experience due to both the uniqueness of the sport and the supportive community we have. Everyone who joins pentathlon has something to learn - you're rarely going to find someone who is going to be the best at all the events. So you are constantly improving your own abilities within each of the disciplines, learning from others in the club, and supporting others to improve. I also think there must be a certain type of person who is willing to take on Modern Pentathlon as a sport - people who are willing to try something different and have a go. The people I've trained with are what have made it really special.

You first started pentathlon in 2017, and this year you’re President of the pentathlon club. What’s that journey been like for you?

When I first started my mentality was very much just to “give it a go”. I feel like encouraging others to do the same and have fun with the sport has been my main motivation as president as well. The past year as president, and as a swimming and shooting coach, has been really rewarding. I've worked with the men's and women's team captains to make the club accessible to anyone who wants to try pentathlon as a sport, while also creating teams that are competitive at our Varsity competition. You really get to know everyone in the club that way, and see people improve in the various disciplines over the year.

One career highlight was my first full height (1.10m) showjumping course at National Rankings in January 2020. I had not had the best competition with a poor fence, relatively slow combined run and shoot, and my trunks had split down the middle halfway through the 200m swim - showing off a bit more skin than I would have liked to the rest of the GB squad (including future Olympic champions). In the showjumping, I was drawn a great horse who was very honest and knew what to do, so for me it was just a matter of relaxing and quietly riding a good line between the jumps. I ended up getting the only clear round within the time limit in the men's competition and got the most points in the riding phase.

What are your next steps, will you be competing again next year?

I will likely be back next year to have a go, and I am sure that newer talent in the club will beat me to it. Keep your eyes peeled for Rudi Brujin-Yard, next year’s Men’s Captain! Other than that, I think the transition to coaching is the natural way to go, given that the demands of my degree and other professional interests will likely increase. I still want to give back to the club, even if competing becomes less of a priority.

And as always, I hope that some of those reading this article might feel inspired to try something different, meet a wholesome community of people, and give pentathlon a go! 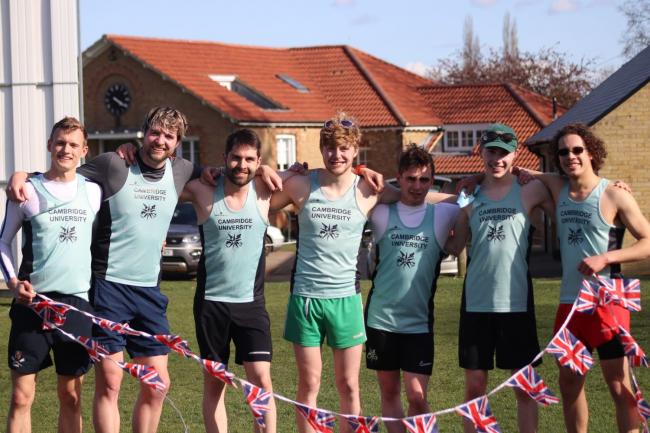 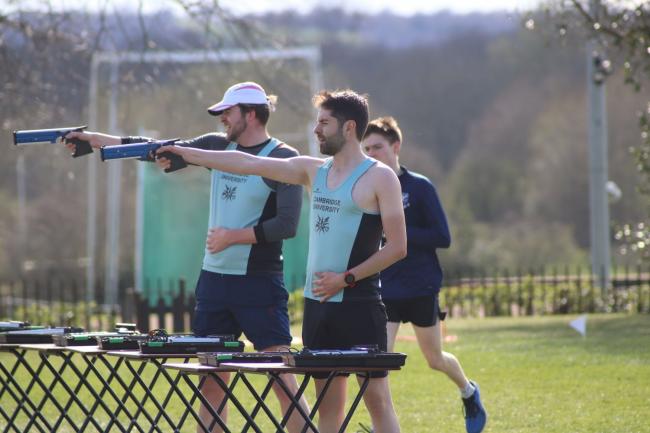 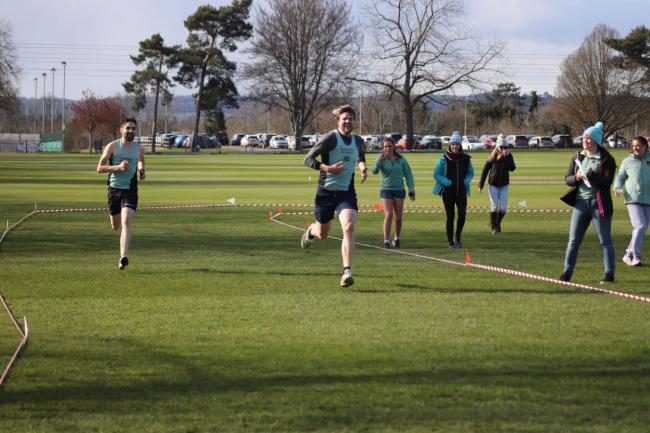 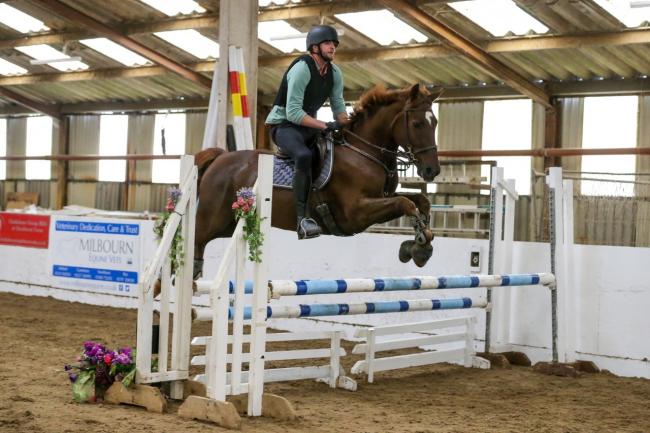 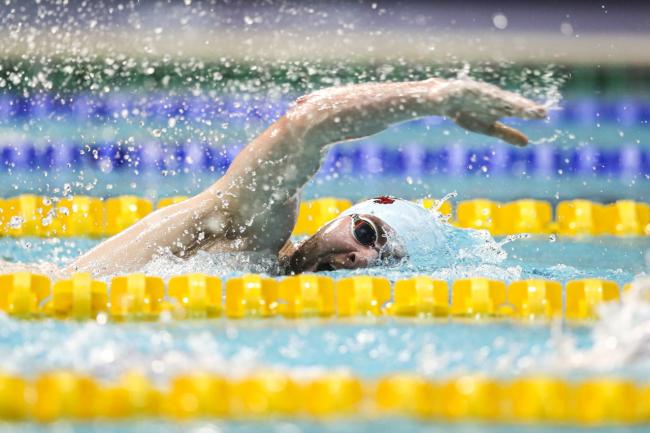