Dr Maria Lukianowicz was a well-loved alumna of Wolfson College and the Boat Club who frequently visited Wolfson, most recently for Festive Drinks in December. She is remembered by her friend, Dr Anna Snowdon. 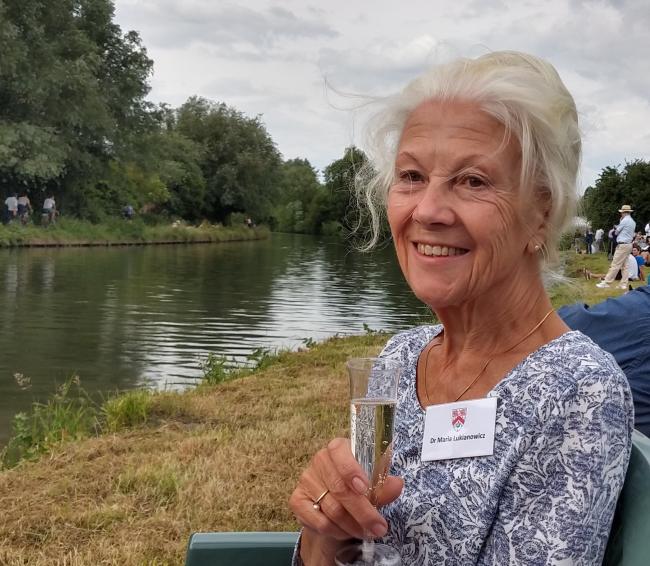 Maria arrived at what was then University College in October 1967 to study for a PhD in Child Psychology. According to her reminiscences recorded for the College's 50th Anniversary, there were only about 35 students at the time, making for an intimate family atmosphere. Wolfson was the first College (with Darwin) to admit both men and women, and in the spring of 1968 an American student Kathy Rader decided to try rowing in an "eight", along with three other well-built women and four muscular men. Maria, appropriately diminutive in comparison, offered to cox the boat (borrowed from another College), and after several weeks' hard practice this intrepid band decided to compete in the May Bumps "for a lark", according to Norman (Paddy) Toms' hilarious description. A mixed boat on the river was revolutionary, especially since Maria sported a flamboyant hat, and while some looked askance at the spectacle, The Times thought fit to publish a celebratory photograph.

Arriving at College only in October 1968, I missed this historic occasion, but did try my hand at rowing, which I briefly enjoyed much more than my one attempt at coxing. Fifty years later, having watched from the bank as Wolfson crews triumphed in the 2018 Mays, Maria and I were invited to the 50th Anniversary Boat Club Dinner, where she gave a brilliant speech. We even got into a boat again, when Maria was amused to be kitted out with a cox's microphone and some new terminology. She must have found it gratifying to recall that the blue and yellow blade colours had been her suggestion all those years before, being the colours of the flag of her native Ukraine.

Maria died in January, and is much missed. Besides her attributes as a friend, her memory will live on in the annals of College history. As the first female cox of the first mixed boat on the river, she changed the face of Cambridge rowing.