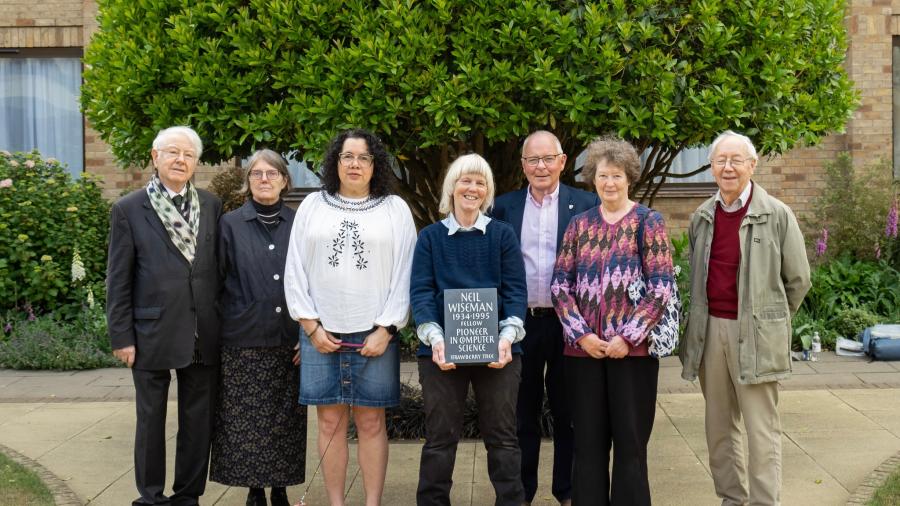 A Reader in Computer Graphics at the University, Wiseman’s work in computer graphics began in 1965 and continued for three decades, delivering seismic shifts in the development of the field. His contribution to computer graphics included three patents, 70 research publications, and the supervision of more than 40 PhD students.

A Fellow of the College in 1983, he was part of a golden age of computing pioneers at Wolfson, including figures such as Roger Needham and Karen Spärck Jones.

The Wiseman stone was laid on Saturday 28 May, 2022, by Lida Lopes Cardozo Kindersley and her husband, Graham Beck, in the presence of Wiseman’s daughters, Kathryn and Carol, former Wolfson President Gordon Johnson and his wife Faith, and current Vice President Graham Allen.

Lida, whose work includes the ledger stone for William Blake at Bunhill Fields, is considered one of the leading letter-cutters in the world.

The Cardozo Kindersley Workshop was established by David Kindersley in 1946, who later worked closely with Neil Wiseman in a “fruitful exploration of the mathematics underlying the aesthetics of lettering”.

Wiseman’s work on lettering came into practice in his secondment from the Computer Laboratory to Cambridge University Press in 1970, where he led a team on computer-assisted composition. The first successful use of computer-aided composition for typesetting at Cambridge University Press came from Neil’s work in 1972. The technology was to take off in a big way after that.

In the 1980s Neil brought one of the first Apple Macintoshes into the University Computer Laboratory. One of Neil’s former PhD students, Prof Peter Robinson, remarked that at the time: “Many people regarded this funny little machine with pictures on its screen as a bit of a joke, only useful for games.”

“The fact that this particular model had a faulty keyboard, causing each key to type the letter next to it in the row, meant that it really was a bit of a joke, but Neil saw an exciting new area for research and the Rainbow display project was born, combining his enthusiasms for electronic design and computer graphics.”

Neil Wiseman' career in the Computer Laboratory spanned four decades, moving from the pioneering Rainbow computer-aided design system in the 1960s to the Rainbow Display that won the BCS Technical Award in 1985.  His legacy continues to inspire and inform the research in the Department of Computer Science and Technology, particularly in computer graphics and interaction.

The fabric of the lab

When fellow computing pioneer Roger Needham broke the news of Neil’s passing to colleagues at the University Computer Laboratory, he described Neil as being “of the fabric of the laboratory.”

He was unwaveringly committed to his students, with Robinson remarking: “Even […] when he was growing weaker, he still insisted on coming in to deliver his beloved lectures on graphics. Only when he was actually kept in hospital would he let me stand in for him.” Wiseman’s last lecture was received with a standing ovation by his students, and Robinson adds: “He was Neil to the end.”

You can read the full appreciation delivered by Dr Peter Robinson for Dr Neil Wiseman here.

Cardozo Kindersley has left indelible marks across the collegiate University, with every single one of Cambridge University’s 31 colleges benefiting from inscriptions from the workshop.

Kindersley works at Wolfson include the Wolfson College stone facing the back entrance, donated by Gordon and Faith Johnson on the occasion of his retirement as the fourth president of Wolfson College. Lida’s lettering also marks the Jack King building and the Alborada building on the front court.