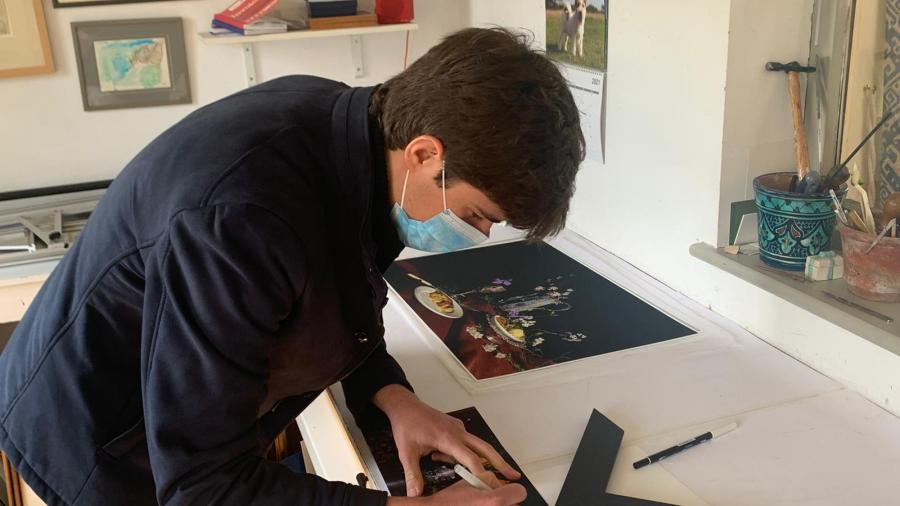 “We’re all hoping for a vaccine for climate change, but there’s no such thing. We have to change behaviours – and that’s what Waste to Art aims to do.”

Santiago Sottil is an MPhil student in Engineering for Sustainable Development. Last month, his exhibition, ‘Waste to Art’, opened in College, putting the spotlight on the issue of global food waste.

Waste to Art is a photographic exhibition of leftovers collected from the College cafeteria, organised to resemble the paintings of 17th century Dutch masters.

“One of the challenges was to make the food waste look nice,” says Santiago, “so people line up as they’re going into the cafeteria and think ‘that really looks like a feast that I would want to eat’, and then they realise that it’s food waste. It’s about reinforcing the lost value of the food.”

One third of all food is wasted globally, and it was an issue that Santiago became increasingly aware of since arriving in Cambridge:

“When I arrived at Wolfson, I had been cooking for myself for eight months – it was not good! So I went to the cafeteria quite a lot, and I was surprised to see food left on the plates after people had finished. That was a little shocking to me, because in Mexico we were always taught to finish your plate and never to leave any scraps.

“At the same time, I was taking a course as part of my MPhil called Driving Change Towards Sustainability, and one coursework was to personally change something towards a more sustainable outcome. I immediately thought about food waste.”

A passion in sustainability born in Mexico

Santiago is passionate about sustainability, an interest that grew out of seeing “the pressures on the environment” in his native Mexico: “I grew up there and I saw how natural resources are mismanaged, and the need to protect the natural areas in the country,” he says.

His passion and concern for the environment led, quite out of the blue, to his first internship:

“In Mexico, a Dutch company was building an airport in my city and so I emailed one of the company directors saying ‘airports need to be more sustainable, you can do this, this and this’. They seemed really interested and offered me an internship in the Netherlands investigating circular economy opportunities – how to minimise waste, how to reuse waste in airports. That was my first sustainability experience – and I really liked having a real impact on what you find.”

Finding outlets and inspiration at Wolfson

After applying the circular economy principles to another internship at Nestle, Santiago applied for an MPhil at Cambridge and, having been successful, he quickly found a home for his sustainability interests at Wolfson’s Sustainability and Conservation Research Hub: “At one of the Hub events, I started talking to [Wolfson Fellow and Arts Committee member] Anna Dempster. I told her that I painted, about my coursework, and we started talking about potential projects.

“My first idea was to take a picture of all the wasted food and do a huge photo exhibition, plaster the walls with all the photos of food waste. I told her my idea and she said, “no, that’s going to be disgusting!” So the idea developed from there!”

The final photos are a great example of teamwork across the College: Charles, Wolfson’s Food Services Manager, gave Santiago access to a room next to the cafeteria to take the photos, as well as a black tablecloth for the backdrop and the College silver. Oscar, the Head Gardener, gave Santiago a tour of the College gardens and told him what flowers he could pick for the photos. Anna Dempster helped curate the exhibition, and Santiago had help from several other students too.

Santiago hopes Waste to Art gets the message across about the importance of not wasting food, and it’s certainly one that is firmly planted in his own behaviours: “If I forget a cucumber in the fridge, I really feel very guilty. I feel horrible!”

The Waste to Art project has also been awarded the first Wolfson College Living Lab Award from the Sustainability and Conservation Research Hub – funded by the Hoath family, the award is a mark of excellence that recognises projects that have a demonstrable green impact on the College community, estate or wider network.

And after making an impact at Wolfson, Santiago is now moving on to a role in sustainability consulting in the UK, showing companies “how to become more sustainable and how to report their sustainability performance. Showing them the positives of sustainability: that you can do this because of the opportunities it gives to your business.”

“I’m an optimistic person,” he says, “but I see the scale of the climate challenge and it’s frightening. The hardest things to change are behavioural changes – but that’s what we need to.”

You can see more images from Waste to Art on the Wolfson College Instagram.

You can find out more about the Sustainability and Conservation Research Hub on their webpage.