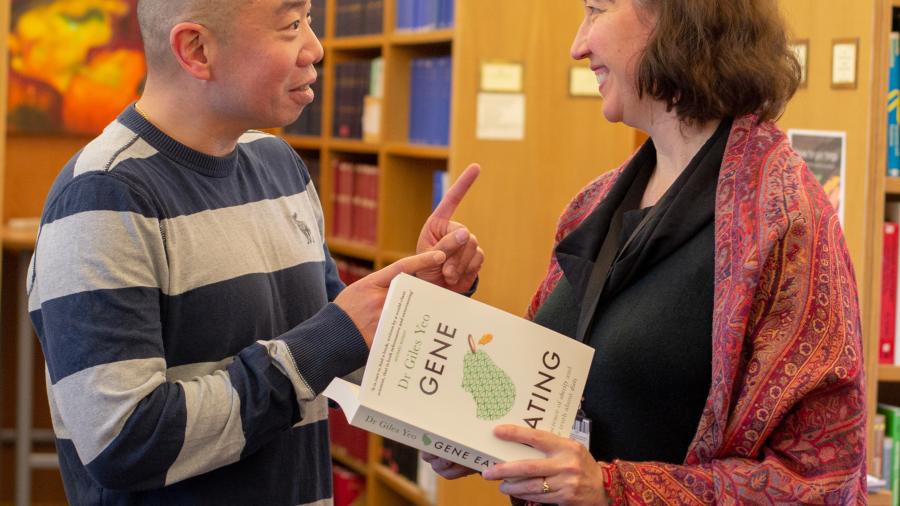 This Friday, Giles Yeo will give a talk in the Lee Hall on Is Obesity a Choice? We caught up with him to find out more about his research and how he juggles his busy schedule of science and science communication.

Wolfson Fellow Dr. Giles Yeo (PhD 1994) is well known for his regular appearances on BBC’s Trust me, I’m a Doctor and through his 2018 popular science book, Gene Eating – The Story of Human Appetite. Last year he gave the prestigious JBS Haldane Lecture at the Royal Institution. However, being a TV presenter and book author are only the most publicly visible two of Giles’s many roles. He also holds a Principal Research Associate position at the Metabolic Research Laboratories and MRC Metabolic Diseases Unit and he is the current president of the British Society for Neuroendocrinology. He is also a Tutor at Wolfson.

Trained as a geneticist, Giles developed an interest in the genetics of severe obesity early on. In 1994, he came from California to Cambridge, joining the lab of Prof Sydney Brenner (Nobel Laureate 2002) for his PhD studies in molecular genetics. In 1998 Giles began his post-doctoral training with Prof Sir Stephen O’Rahilly in the Department of Clinical Biochemistry, working on the genetics of severe human obesity. During this time, he was the first to report that the disease resulted from mutations in the melanocortin-4 receptor (MC4R) and in the neurotrophic receptor TRKB.

Over his 20-year career, Giles has spent much of his time debunking the misconception that obesity is a result of 'bad choices' made by individuals. Although he does encourage responsible eating at the personal level, he also draws attention to the structural and political conditions that have a role to play in reducing obesity. He is adamant that obesity is a societal problem. “Body weight is not a choice”, says Giles, but the result of both genetic and biological factors. A person's weight is the result of thousands of individual food choices made over the years. Making those choices, for example whether or not to grab that bar of chocolate at the supermarket check-out line, is more difficult for some people than for others. His book, Gene Eating, received great praise for communicating this important scientific information in an informative yet humorous fashion.

"Gene Eating is one of the clearest attempts I have come across to explain complicated science. It is an entertaining read, full of lively anecdotes and self-deprecating humour... It is hard to imagine a more likeable guide than Yeo, or a more level-headed one. But if he sometimes makes us laugh in this wise, sensible book, his message is deadly serious.” (Christina Patterson SUNDAY TIMES)

On top of all of this, Giles—a Wolfson alumnus himself—still finds time to share his experience and knowledge with current students. When asked how he had learnt the skill of making solid scientific findings approachable for a wider audience, he joked: “I’m not shy, and I like talking. And I had a lot of practice when I was teaching. You had to get better quickly, otherwise you would get bad reviews”. His primary piece of advice to students is: “There is no reason not to be humorous. Humour is the key to captivating people”. The rest, he says, is practice, stressing the importance of presenting your research findings to diverse audiences, for example at the Wolfson Research Event.

Photo: Giles chatting with Wolfson Librarian Meg Westbury after donating a copy of Gene Eating to the Lee Library.