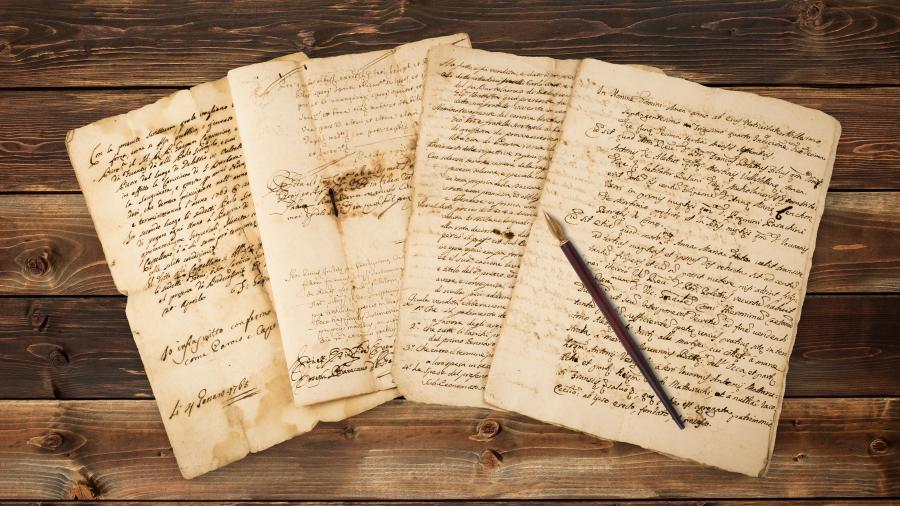 Wolfson College Senior Member Professor Peter J. Lucas is an Honorary Research Associate in the Department of Anglo-Saxon, Norse and Celtic. He's been using the quiet time during lockdown to ensure that the proofs for a new edition of his book are word-perfect.

A colleague in my subject of Old English (Anglo-Saxon) had to give up his room in his college on retirement. As a favour he was given another room in the attic. It was up so many steps that he called it 'paradise'. He even read proofs there. Proofs in Paradise. Reading proofs is a bit like examining. It requires complete concentration, to the exclusion of everything else. Inevitably one feels a whiff of envy for people who can sunbathe in parks, or romp on Brighton beach, or walk in the Derbyshire Peaks. But COVID-19 has changed all that. You're better off now in a paradise of proofs rather than risking a snarling drone swirling overhead telling you to stay at home and protect lives.

It is essential to get everything right with no errors. If you do make a mistake it can live on and haunt you. The most famous example is the so-called Wicked Bible, published in 1631 by Robert Barker and my namesake Martin Lucas. It was 'wicked' because it missed out the word 'not' in the injunction 'Thou shalt not commit adultery'. In medical texts the consequences of error could be even more serious. "One wrong word may now kill thousands of men", thundered Rabelais in 1532 as he edited Hippocrates. I had an example of my own in an article I wrote some years ago about a dilapidated manuscript from which some text was missing. I was describing it in detail and noted that in between gatherings of leaves a loose scrap of vellum was present, which could mean that material was lost at this point in the manuscript. Unfortunately the type-setter missed off the initial letter s from the word 'scrap'. At least I knew afterwards that anyone who teased me about it had read the article with a nose for detail. Ideally, like examining, there is a second reader. When Angela (my wife) and I published a book jointly in 2014, we both read all of it in proof and I am pleased to say there are no typos.

Some years ago I published an edition of the Old English poem Exodus, and then a second edition came out, and now I have been checking the proofs of the third edition. This is basically a remote operation as far as communication is concerned, ideally suited to conditions of social distancing. There is Patrick from Liverpool University Press, who is in overall charge. He does all the right things, thanking me for my work, wishing me well, telling me what's going to happen and then getting it done. It is so reassuring when someone actually does what he says he will do. Then there was Rachel, who dealt with the production, sending me the proofs and receiving them back with corrections. She said her team, while observing social distance, were working as near normally as possible. That's the spirit. They did a good job. I hope I did too. We shall see in early June when the book comes out.

I have dealt mainly with Clare, who is the Senior Editor. I've never met Rachel or Clare, yet with frequent e-mail messages you get to know them a bit. Clare helped with the decision to use a new image on the cover. The first edition, done by Methuen, had a dust jacket with an image of a muscular Moses with rod raised to part the Red Sea. They wanted to put it right round the book but in order to do that would have had to reverse it, so making Moses left-handed. I had to rule this out because both the bible and the Old English poem are absolutely clear that Moses held the rod in his right hand. So Moses stayed on the front cover, right-handed, but got axed when the second edition came out in paperback with Exeter University Press. They put an Anglo-Saxon warrior on the front; to me he looked like a toy soldier. So this time we have an image of Moses leading the Israelites in a column as they follow the Pillar of Cloud across the Sinai Desert towards the Red Sea. It's from a map of the exodus in a sixteenth-century bible and has the merit of fitting the subject perfectly. We had to get permission from the British Library as the book that has it is not in Cambridge, and Clare was most helpful in what can be a tiresome process. I shall probably never meet Clare but as we were finishing off she checked that I was not living alone and I was able to reassure her that Angela and I were face-timing our granddaughters to keep in touch. She was working from home with her husband and three children.

The subject of the poem is strangely apposite in the circumstances of the threat of COVID-19. It is basically about escape from an enemy. The Israelites were escaping from the Egyptians, who are presented as associates of the devil, but when the Israelites have passed through the Red Sea on dry land, the pursuing Egyptians are caught by the returning waters and drowned. So the enemy is exterminated, with a bit of help from God, who parted the waters of the Red Sea and then brought them back together again.

A bit of divine intervention would not go amiss now.

COP26 at Wolfson: All week