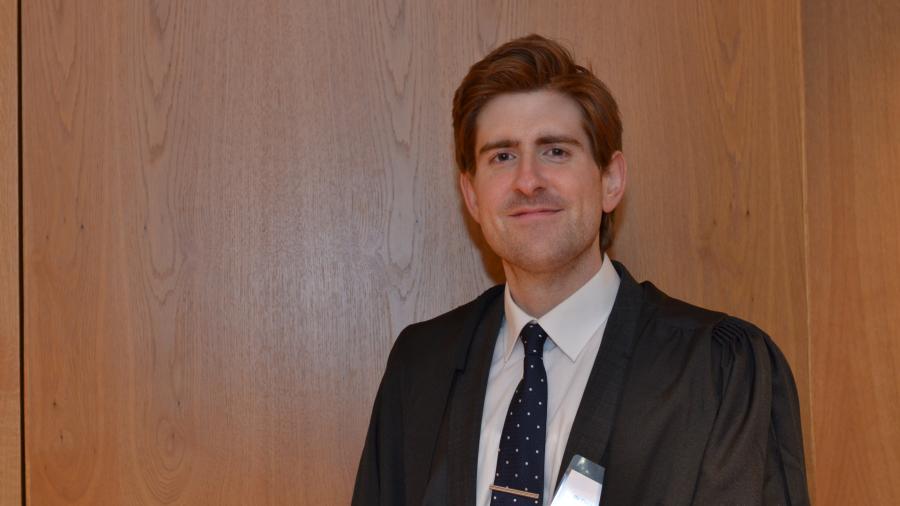 The Humanities Society kicks off its events programme for Lent with a talk by Dr Cezary Kucewicz, whose new book, "The Treatment of the War Dead in Archaic Athens: An Ancestral Custom" (Bloomsbury Academic 2020), puts the spotlight on an area of Classics scholarship that has received far less attention than it should.

Great scholarship can fill in the gaps in our understanding, highlighting new connections and new approaches to evidence. In his new book, Cezary does exactly that, exploring a variety of ancient sources to analyse the significance of the war dead, not in Classical Athens (c. 480–323 BC), where scholarship has commonly focused, but in Archaic Athens (c. 800–480 BC), where there are rich new discoveries to uncover.

Cezary will give an overview of his book at the Humanities Society event (6pm-7pm, Tuesday 26 January), and you can read a full description of the talk and register on our Events page.

In a detailed conversation, we spoke to Cezary about the Humanities Society at Wolfson, the origins of his research, and whether he can clear his mind on the basketball court.

Tell me a little bit about Humanities Society events at Wolfson? What’s particularly exciting about them?

The Humanities Society at Wolfson hosts weekly talks on Tuesday evenings in full term, covering a range of disciplines and subjects in the field of Humanities (history, literature, law, music, fine arts, anthropology and many more). This scope ensures that there is always something of interest in our programme; talks range across different historical periods, geographical locations, cultural contexts and academic perspectives. Our speakers are at the forefront of their respective disciplines, often having just published a book or finished a major research project. But a full Humanities Society experience wouldn’t be complete without the discussion that follows every talk. The latter is perhaps my favourite feature of all HumSoc events, showcasing the varied backgrounds of our attendees and giving the debates a strong interdisciplinary flair, which I think perfectly reflects the nature of our community at Wolfson. This term we have talks looking at ecomusicology, race and the history of American slavery; British Bangladeshi identity; early Christian martyrs; the rise of the overseer state in Britain’s post-slavery Empire; anti-racism in Britain in 20th century; and Fascist welfare. Our events are hosted as Zoom webinars this year and anyone can attend – just make sure to register.

What brought you to focus on the treatment of war dead in Archaic Athens? When was the spark moment where you realised this was something you thought needed further interrogation?

To be honest, I don’t think there ever was a spark or eureka moment. It was more of a gradual discovery which began in my childhood. I feel that, for many of us, research is always a blend of intellectual curiosity and personal stories. My story began when my mum read me a children’s version of Homer’s Iliad when I was little. The book had gripping illustrations and I particularly remember the scene of Achilles dragging the body of the Trojan prince Hector behind his chariot. To modern readers, the scene demonstrates the horrors of war; but in the Iliad, the episode was presented as a moment of great triumph for Achilles. Years later, I read Sophocles’ Antigone in high school, a play about the importance of treating the fallen with respect and dignity, a central theme in ancient Athenian drama. The more I thought about it, I was struck by the contrast in the depiction of the war dead – each story indicated differing sensibilities among ancient audiences. I decided that I wanted to understand why stories enshrined in Homer and other early Greek myths, most of which date to the Archaic period in Greece, differ so much from the works of later authors from the Classical era.

Why was there a hole in the research and analysis of the Archaic period of Athens? Is it less fashionable?!

Most of what we know about ancient Athenian customs concerning the war dead comes from the Classical era. In a famous passage, the Athenian historian Thucydides described in some detail the public system of repatriation of all casualties of war, along with the ceremonies that accompanied the burial of the war dead at Athens. Thucydides added that this was an ancestral ‘custom of our forefathers’ (patrios nomos), but it is now generally agreed that the public repatriation and burial for the war dead followed the introduction of democracy in Athens (508/7 BC) and the subsequent Graeco-Persian Wars. Relatively little is known about how the Athenians buried their war dead before. There is surprisingly little archaeological evidence for mass military burials (polyandria) before 500 BC and no historical accounts like Thucydides’ to guide us. Because of this, scholars have been reluctant to engage with the subject. My book tries to fill that gap.

The image of repatriating war dead is such a potent one in the modern cultural imagination. Does studying the Athenian traditions give us a greater understanding of the traditions we see today?

One thing which always struck me about the custom of repatriating the war dead in Classical Athens is the incredible infrastructure required for the task. The resources and manpower needed to identify hundreds of casualties, to transport their remains to Athens and then bury them as part of an expensive ceremony, would have been enormous – so much so that the ancient Athenian practice of repatriation on such a massive scale has been a rarity in the whole of human history. In the modern day, we usually assume that this is the norm, especially when it comes to the USA. But even in the States, publicly-funded repatriation is a relatively recent phenomenon, introduced for every fallen soldier only during the war in Korea (1950–1953). Seen in this light, one can appreciate the enormity of the endeavour which the ancient Athenians imposed upon themselves in order to honour their war dead.

And so the question I found myself asking is why the Athenians adopted the expensive practice of mass repatriation in the first place. A much simpler and economic option would have been to bury the fallen on the battlefield, like the Spartans did in the same era. There is no easy answer, but the introduction of collective funerals certainly played an important role in fostering a sense of patriotism and glorifying the notion of sacrifice for the city. Classical Athens embarked on a programme of aggressive expansion in the fifth century BC, finding itself almost constantly at war. In this context, maintaining the loyalty and enthusiasm for war among the citizens was crucial, and the institution of public burials would have played an important part. This is not to say that these ceremonies were used primarily to fuel the military machine that Classical Athens was. The sense of closure for individual families dealing with a loss must have been an equally important factor, which I also discuss in my book.

Even so, it is interesting to see a similar rhetoric for the war dead in recent times. For instance, I was surprised to find out how often modern authors use ancient sources, like Thucydides or Euripides, to illustrate the importance of modern American practices surrounding the recovery and burial of military casualties. I think it’s certainly something to bear in mind when drawing on ancient material or wisdom, that any past traditions were a product of specific historical circumstances. In the case of Athenian public funerals, they coincided with a programme of military expansion, and I think this is often overlooked by people who tend to approach Athenian ceremonies for the war dead as a timeless archetype and historical ideal.

Tell me about your experience of Wolfson so far. I was interested to learn you’re a basketball player: does your brain ever wander to your research while you play, or is the court a separate space where you can throw a three-pointer with an empty mind?!

I’ve been a Junior Research Fellow at Wolfson for nearly two years now and it’s been an enormous privilege to be a member of the intellectual community here. The freedom to exchange ideas with people from different fields, countries and cultures is key to any academic endeavour and I feel that Wolfson is among the best places to do this in Cambridge. I particularly value the support we get from the College for pursuing new ideas and initiatives, whether in our path-breaking Research Hubs, or in other events like the Humanities Society talks. Classics and Ancient History also feature heavily (reflecting the expertise of our first President, Professor John Morrison) in the intellectual programme; just last summer we hosted a series of weekly webinars which became known as Wolfson (Ancient) Warfare Wednesdays, attended by over 1,000 people (recordings available in our Media Collection).

This year, of course, has been very challenging, as opportunities to meet and interact with people have been difficult. As many people at Wolfson already know, I’m a keen basketball player and really miss the physical exercise and camaraderie that comes with it. I personally find that team sports are the perfect way to switch off and stop the constant stream of thoughts in your head. Although it’s exhausting – I get too competitive sometimes – I feel mentally refreshed after every session. Staying active in lockdown has been a challenge and I can’t wait for the day when life goes back to normal – so we can resume our discussions in person, and I can get back to telling you about the ancient Greeks and basketball, or, more preferably, listen to the many intellectual curiosities and personal stories that comprise our community at Wolfson.