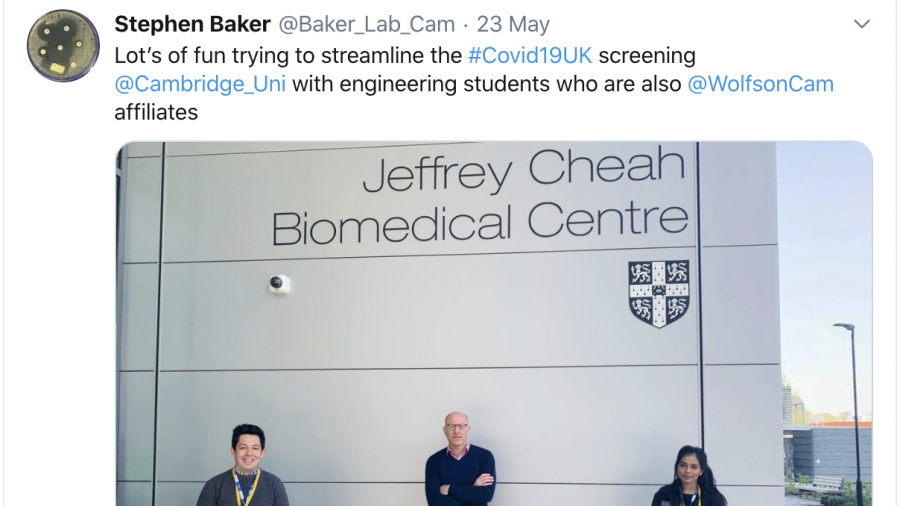 Under normal circumstances the Baker Lab, run by Wolfson Fellow Professor Stephen Baker, is an academic lab, studying infectious diseases in developing countries. But come the Coronavirus, Steve saw a need to use his lab’s expertise to provide vital testing for health care workers at Addenbrooke’s Hospital.

Although Public Health England had been carrying out testing to detect the virus in symptomatic patients, it did not have the capacity to test frontline NHS staff. That meant staff with symptoms, or who had been exposed to someone with symptoms, were self-isolating without knowing whether or not they actually were infected with Sars-CoV-2, the virus that causes COVID-19. This in turn led to staff shortages just when Addenbrooke’s was gearing up to deal with the pandemic.

“We would not have chosen to do this work but we took up the challenge,” says Steve, whose lab is part of the Cambridge Institute for Therapeutic Immunology and Infectious Diseases (CITIID). But there were a few hurdles to overcome first.

The polymerase chain reaction (PCR) test that identifies whether or not a person is infected relies on taking a nasal swab from the person, isolating the viral RNA and then copying (amplifying) it to confirm the presence of the virus. However, because the virus is so highly infectious, the PCR could only be performed in a Containment Level 3 facility. This not only slowed down the process, but it also limited the number of tests that could be done to the available capacity of those existing Level 3 facilities.

However, Steve’s team found a way to inactivate the virus immediately after a nasal swab is taken, allowing the PCR to be processed in more widely available Level 2 facilities. The testing kits are prepared by putting a lysis buffer into the test tube into which the swab is placed.

“We turned to Professor Ian Goodfellow at the Department of Pathology,” says Steve. “He was able to give us the buffer material that deactivates the virus at the point of contact.”

Once the procedure to deactivate the virus was prepared, Public Health England (PHE) needed to confirm both that the deactivation and the PCR testing was safe and accurate. PHE was able to provide the primer and the probes that are required for the PCR, but their testing process was different in the Level 3 labs. In order to validate their work, Steve’s lab took swabs from hospital staff with known COVID-19 infections and ran them through their PCR protocol to ensure they got complementary results to the PHE testing. Once they had approval from PHE they were able to start testing health care workers.

With its new testing capacity, Addenbrooke’s quickly put in place a system where staff could drive through the hospital car park and receive a nasal swab without having to leave their cars. At this point, two Wolfson students were drafted in to help out. Fathima ‘Nisha’ Begum Samad and David Cordova Jimenez, both MPhil students in Industrial Systems Manufacture and Management (ISMM), brought their knowledge of manufacturing processes to streamline the process at the point of collection. Their recommendations were taken up by the hospital and improved both the efficiency and the experience of the testing.  Next, they turned to the lab itself to see whether they could bring a similar kind of analysis to maximise efficiency and productivity during the actual PCR testing.

“We looked at what happened after the swab was taken,” says David. “The swab goes into the tube where the virus is deactivated. That tube is placed in a plastic ziplock bag and then placed in a biological container. When there are enough samples, someone walks over to the Baker Lab with them.”

The Lab is separated into different areas to handle different aspects of the testing. In the ‘dirty’ room, a team of 4 volunteer PhD students manually extract the samples with pipettes to prepare them for the RNA extraction, a multi-step process that isolates any viral RNA from the other biological material in the sample. Once the RNA is prepared it is placed in individual wells in a PCR well plate that can hold 96 samples at a time.

With the samples prepared in a 96-well plate, the PCR amplification can take place in a machine in the ‘clean’ room. A ‘master mix’ of enzymes and probes that provides the raw material for the duplication of the RNA is added to the samples. In addition, each PCR run contains several controls: plain water or master mix only. From the time the samples enter the lab to the final results takes about 4 hours and the lab was able to process 180-odd tests per day.

David and Nisha wondered if it would be possible to increase the number of samples that could be extracted in the initial steps. Each member of the 4-person extraction team working simultaneously took about 2 hours to prepare 20-odd samples. Could this step of manual pipetting the samples in and out of various reagents be turned over to a robot to automatically do the extraction?

The duo turned to Cancer Research UK, who have a robot capable of such automation. But they needed a bespoke well plate that could hold more than the 24 samples that CRUK was using. Back at the Institute for Manufacturing, they asked their Course Director Dr Florian Urmetzer if he could help. Within 24 hours, Florian and his colleague Chris Jennings had indeed manufactured a bespoke well plate. Unfortunately, they were not able to put the method into practice due to concerns about cross-contamination of the samples using the CRUK robot.

“The machine needed to be in a laminar flow cabinet to ensure that the air was continually cleaned,” says Nisha. “So we had these really great bespoke well plates but the machine wouldn’t fit into the sterile cabinet.” 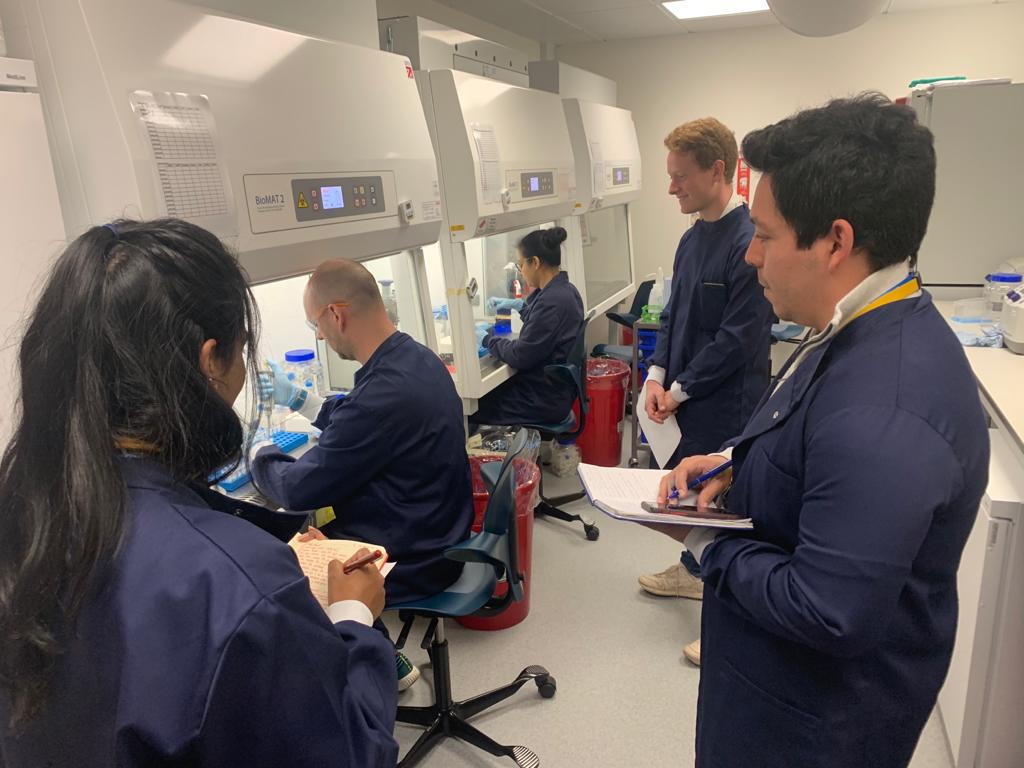 Undeterred, David and Nisha saw another way they could help to improve the capacity of the testing process. In addition to the tests performed on the NHS staff who were self-isolating, there was also a need to test staff working in certain wards. These workers need to be screened frequently because they are in contact with patients who do have the virus, and the tests ensure that the PPE the staff are using is working.

“We identified some inefficiencies in the way the tests were prepared and distributed. Some days not all of the tests were getting used. Other days they might run out. We wanted to make sure they get the right number of tests to the right people,” says Nisha. The production planning tool has now been adopted by the Addenbrooke’s staff as part of their testing protocol.

They also began working on some process modelling to try and rationalise the cost of the testing. They estimated that the Baker Lab costs worked out to approximately £10 per test, compared to the NHS test at £39 and tests done by private labs at £100 or more. However, as the immediate crisis has slowed, the Baker Lab should no longer be needed to carry out the NHS staff testing, so this modelling remains in the initial stages.

David and Nisha are pleased they were able to be a bridge between the NHS and the Baker Lab during this pandemic. They feel they have an understanding of testing from both the front and back ends of the process and are writing a paper so that other hospitals can gain from their experience. For their volunteer efforts to bring their expertise to the NHS during this crisis, they were given a Vice-Chancellor’s Social Impact Award.

Both students will remain at Wolfson until the end of August working on their MPhil dissertations: Nisha on emerging technologies for virtual health care consultations, and David on restructured supply chains and companies that re-tooled during the pandemic. Then the job-hunting begins – assuming their skills are not needed to help out with another wave of Coronavirus testing.