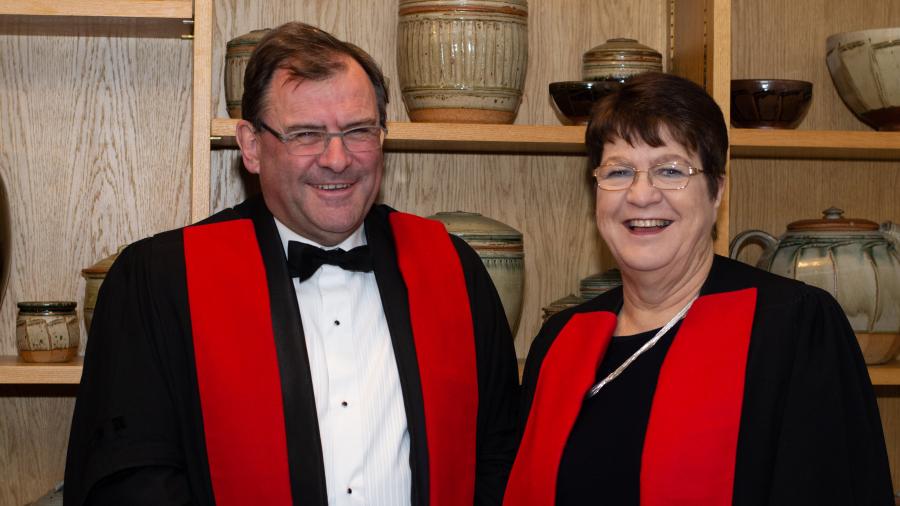 Professor Maskell was at College to receive his Honorary Fellowship at the annual Fellowship Dinner.

"It was delightful to be able to bestow an Honorary Fellowship on our former Fellow Duncan Maskell, now Vice Chancellor of Melbourne University at our Fellowship Dinner last night." Professor Jane Clarke

After studying Natural Sciences and Pathology at Cambridge from 1979 to 1985, Professor Maskell embarked on an academic career that took in Wellcome Biotech, the Institute of Molecular Medicine at the University of Oxford, and Imperial College of Science, Technology and Medicine. He then came back to Cambridge and held a number of leadership roles at the University, including Head of the Department of Veterinary Medicine, Head of the School of the Biological Sciences, and the Marks and Spencer Professor of Farm and Animal Heath, Food Science and Food Safety at the Department of Veterinary Medicine. Professor Maskell was Senior Pro-Vice-Chancellor of the University from 2015 to 2018.

Professor Maskell has published more than 250 research papers, is a Fellow of the Academy of Medical Sciences and an Honorary Associate of the Royal College of Veterinary Surgeons. He also was co-founder of several biotech companies.

"Wolfson is a really special place. I have been a Fellow here for about 20 years, and was slowly crawling up the league table such that I thought one day I might even be the Senior Fellow, but alas I have wrecked my chances of that with my move to Melbourne. During my time here I have been on Council more than once, I have chaired the Bursarial Committee, which became the Finance Committee. I have been involved in appointing a bursar and two senior tutors, and have been privileged to know three fantastic Presidents. I have made many friends and enjoyed enormously hearing about the lives and studies of many students."

Many warm congratulations to Professor Maskell and we look forward to seeing you back at Wolfson in the future.