The study of English at Wolfson aims to perpetuate its founding educational ethos of creating critical citizens capable of making interventions across the entire range of social knowledge. 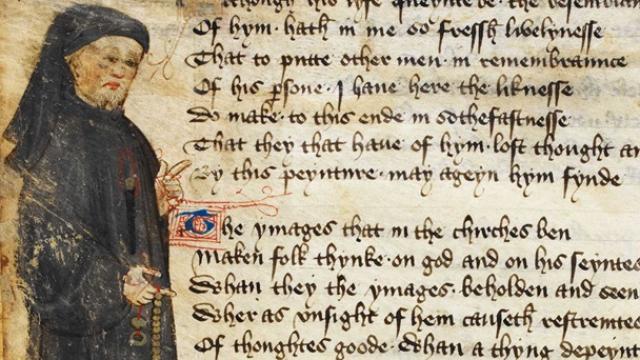 The Cambridge English Tripos was the most influential Literature degree in the world through the twentieth century and it continues to shape international teaching and research in the twenty-first.

As such we actively honour the University's great innovations in reading forged by I.A. Richards, William Empson, F.R. Leavis, Raymond Williams and J.H. Prynne, in addition to remaining highly attentive to emerging theoretical approaches. Wolfson English thus takes the duty of teaching very seriously, recognising that the reward of education is found not in the realisation of quantifiable outcomes, but in mining the rich seams of opportunity offered by a Cambridge environment that fosters the adventurous life of the mind.

The English Tripos is divided into a two-year Part One, and a one-year Part Two programme. For most students, Part One involves a reading of literature originally written in English from Chaucer through to the present day. An exam in Practical Criticism is held at the end of the first year, where students are asked to comment on passages drawn from the past 800 years of English Literature in relation to the rhetorical functioning of an argument, the interior relationships of the text and the social determination of its discourse. A portfolio of three essays of 2,000 words each on Shakespeare is also submitted.

At the end of the second year, examinations are set across four extensive literary period papers: 1300-1550, 1500-1700, 1660-1870 and 1830-1945 or 1870 to the present. Optional papers include those devoted to Literature in a Foreign Language, Early Medievalism, Medieval Welsh or Irish, which can be substituted for one of the mainstream periods. The ensuing examination questions are relatively non–prescriptive and wide-ranging. Most students will choose to sit three of these four papers, replacing one with a 5,000-word dissertation on a subject of their choice.

The Foreign Literature paper is not compulsory, but students with an A-level or higher qualification in a language such as French, German, Spanish, Russian, Italian, Old English, Latin or Ancient Greek, might wish to consider it. Faculty classes are provided in order to develop reading fluency, introduce a range of work in a foreign language, and foster an appraisal of the processes involved in translating a foreign text into English. There is no unseen translation requirement; the exam is instead based on an anthology of set texts. Students with an A-level in one language sometimes take this opportunity to build their knowledge of another from scratch.

The Part Two component pursued through the final year offers a wider scope for developing individual interests. A palate of optional papers complement compulsory papers on Practical Criticism and Tragedy. These range from Chaucer, Medieval Court Culture, Early Tudor literature, Shakespeare in Performance, and the History and Theory of Literary Criticism, to American Literature, the Ethical Imagination, Literature and Visual Culture, Postcolonial and Related Literatures, Contemporary Writing in English, and Prose Forms, 1936-1956.

Students can choose to study two of these papers, in addition to submitting an extended 7,500-word dissertation (again, on any subject of choice), or to contribute one paper and two dissertations. Cambridge English therefore encourages students to create a course work programme that reflects their particular strengths and interests. More detailed information is available via the Cambridge Faculty of English website 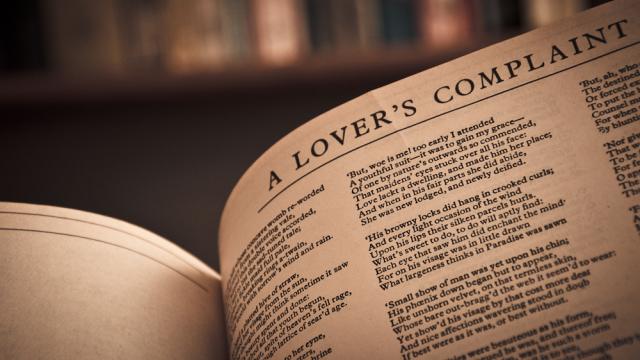 Teaching is conducted through lectures, seminars and tutorials, known in Cambridge as the supervision system. Lectures are organised centrally by the University Faculty, and offer the stimulus of a wide range of topics, approaches and models of critical thinking. While attendance is highly recommended, students are at liberty to experience as many or as few of these as they choose. The English Faculty and Library is just five minutes’ walk from the College, as indeed is the University Library. The Lee Library at Wolfson also gives access to many primary set texts taught on the Tripos, as well as expert guidance for using electronic resources.

Seminars are held with some or all of the students in the Wolfson year-group, but there are seldom more than four students to each class. The approach tends to be informal: open and conversational without being casual. At Part One students may typically take three classes per week: one concentrating on the wider cultural–historical circumstances of a literary era, another dedicated to appraising one of its primary literary works, and a further class focusing on the close reading of an unseen text. This is known as Practical Criticism – an active interpretation springing from the practices introduced by I.A. Richards and William Empson, the progenitors not only of Cambridge English but of textual study from a literary, as opposed to historical–linguistic, perspective.

The weekly supervision lies at the core of the Tripos, an hour-long individual meeting in which a lecturer discusses an essay that a student has prepared over the past few days on an agreed subject. For instance, if a student is reading Modernism, a week might be dedicated to T.S. Eliot. A supervisor would recommend a series of poems to concentrate upon, and suggest a small number of complementary works which could spur a fruitful reading – as, for example, Ezra Pound’s criticism, F.T. Marinetti’s Futurist Manifesto, and HD’s Trilogy – along with a some approaches for a structuring an essay. Secondary criticism is also commonly recommended, but at undergraduate level the emphasis at Cambridge falls expressly upon the primary text. The creative act is not to be regarded as a subordinate demonstration of a theoretical position!

The following five days or so would be spent intensively reading Eliot and supporting materials, before embarking on an essay of around 2,000 words. This would be an exploratory, even raw piece of criticism: a framework for experimental perception which may then be further developed, qualified or challenged in discussion with a supervisor.

Wolfson has one Fellow and Director of Studies in English, Dr Michael Hrebeniak, who specialises in Modernist, Postmodernist and American literature, and Visual Culture. However, in common with every English Faculty member, he teaches enthusiastically beyond those areas, and lecturers from every other college also supervise our students.

Students can expect to work alongside University specialists in their chosen fields, throughout the three years of Tripos. Supervisors tend not to impose a single academic model on the interpretation of a text – as, for example, Marxian, poststructuralist, phenomenological – but seek to encourage students to discover a plurality of perspectives as a means of enhancing their own critical thinking.

Supervisions are characteristically non–prescriptive in their orientation; students always have a say as to which authors they choose to study, and they are often encouraged to slant their work in a direction that might reflect a burgeoning interest in, say, cultural history, cinema or philosophy. More generally, a supervisor responds to the person as much as the subject, and tailors his or her approach accordingly.

English is a discipline of the Humanities and, as a student’s ability flourishes, supervisions evolve away from a master-pupil relationship into a lively exchange of perceptions among equals, who share a recognition of what Lewis Mumford described as ‘the cooperative and generative functions of life – feeling, emotion, playfulness, exuberance, free fantasy – in short, the liberating source of unpredictable and uncontrollable creativity.’ At Wolfson this ethos extends into a series of extra-curricular events, including visits to the triennial Cambridge Greek Play and an annual trip to London, typically comprised of a museum talk, a theatrical production and an interminable psychogeographic walk led by the Director of Studies. 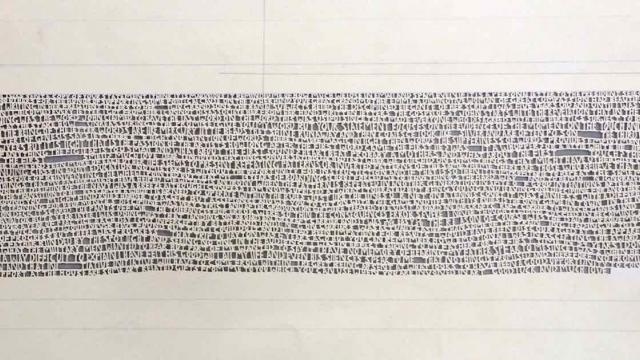 It is essential that applicants should have English Literature as one of their A level (or equivalent) subjects. Where straight English Literature is not offered at an applicant's school/college, the combined English Language and Literature A level is acceptable. A distinction grade across all modules of an Access to HE Diploma would also confer eligibility.

Modern/classical languages and History are also useful subjects though not essential and many successful applicants have studied Mathematics and science subjects.

While there is no fixed quota of places in English at Wolfson, the subject now boasts the most populous undergraduate community at Wolfson, with up to eight students typically admitted per year. Our undergraduates frequently distinguish themselves. Over the past decade, two Wolfson finalists achieved the highest and second highest results in English across the entire University, and in 2020 our candidates recorded the extraordinary achievement of eight 'firsts' across both parts of the Tripos. Our students frequently go on to read for postgraduate research degrees.

While competition for places is severe in common with every Cambridge college, Wolfson has made a commitment to the development of the subject of English at undergraduate level, and we are now actively recruiting students of exceptional promise and ability. While many of our successful candidates can claim to have achieved three As at A2 level (or equivalent), the demographic of Wolfson students swerves a long way from the identity of those inhabiting the more standard ‘post–school-age’ bracket. The majority of our undergraduates might well arrive in their early– to mid–twenties, but we have also benefited hugely over the years from the presence of university entrants in their seventies. This is a literary community of multiplicity: of age, nationality, race and creed – one that is wholly unique in Cambridge. Pedagogical attitudes positively reflect this, and we aim to celebrate the vast range of experience beyond prior academic achievement that our students bring to the subject. If you are driven by an overwhelming intellectual curiosity, believe passionately in the social necessity of the arts, and desire to become a producer, rather than merely a consumer, of meaning, then you could be the kind of student who would thrive at Wolfson.

Wolfson also invites applications from graduates of approved universities who may wish to study Part Two of the English Tripos (with one additional paper) over two years as an Affiliated Student. The title is slightly misleading in that affiliate status in fact assigns full student membership of the University. For further information please visit the main University website. We also welcome applicants who propose to defer their entry to the College by a year.

Candidates will be asked  to submit two marked essays or other written work. This should be in a related discipline which the candidate is studying/ has studied. Interviews are preceded by a sixty-minute entrance exam. The interviews are relaxed, and are free of any cunning attempt to test student ingenuity by unorthodox means! The intention is to gauge a student’s ability to read perceptively and critically, and to glean evidence of an inner motivation and intellectual hunger. Beyond these considerations, we have no preconceived ideas about the type of person we are looking for.

Dr Michael Hrebeniak is College Lecturer in English at Wolfson, a post that he also holds at Magdalene College. He previously taught Humanities and Jazz History at the Royal Academy of Music and Metropolitan Studies at New York University, and produced poetry documentaries for Channel 4. Recent publications include chapters in edited collections on the subjects of cinematic space, photography, manuscript culture and jazz writing. 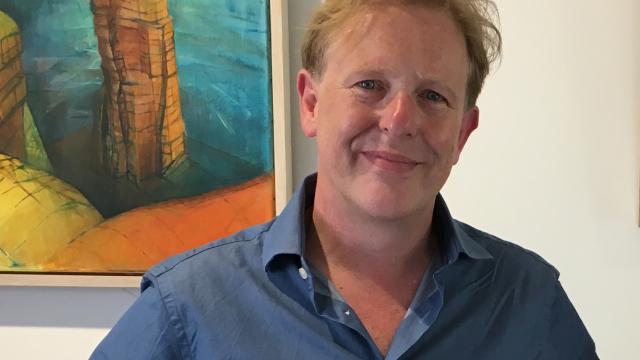 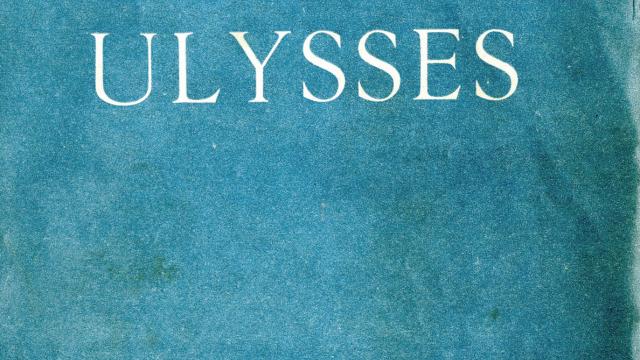 This week I found myself sitting in a supervision at Wolfson College, looking closely at the text of James Joyce’s novel Ulysses. We’d already spent about 20 minutes analysing the  first few words of the opening chapter in a previous supervision and this time we spent more than an hour looking at just six lines. I can only describe the experience of these small group teaching sessions, in this case just three of us with our tutor, as mind-blowing. 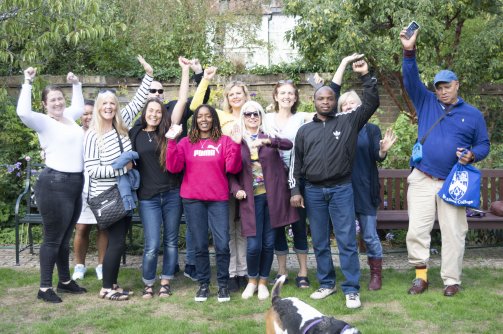 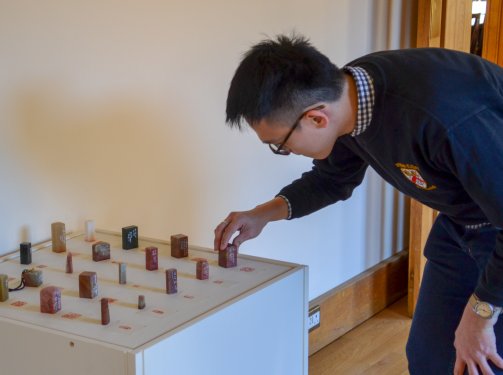