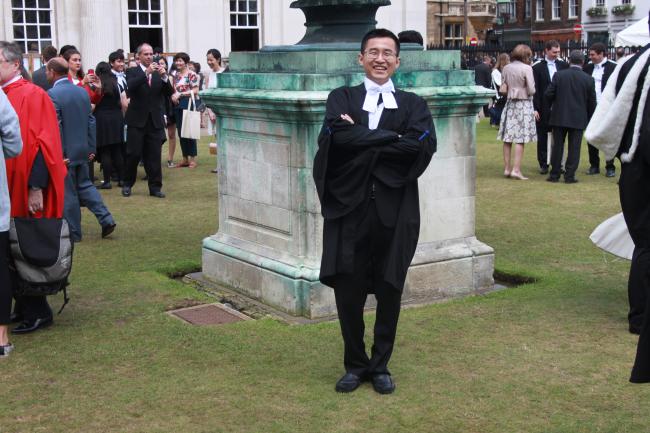 Wolfson College awards the following prizes for academic excellence. They are awarded on graduation.

For the best first class performance by a Wolfson student in Part II of the Law Tripos
Sir David Williams was President of the College between 1980 and 1992 and Vice-Chancellor of the University between 1989 and 1996. He was also a distinguished lawyer in the field of public law.  The prize celebrates his outstanding service to the College.

For the most distinguished performance by a Wolfson student in the LLM
This prize celebrates our distinguished Honorary Fellow, Professor Hugh Bevan, who has spent his life researching and teaching in the field of family law. For many years, he was Professor of Law at the University of Hull; he came to Wolfson first as a Visiting Fellow in 1986 and has been an Honorary Fellow since 1992.

For a First Class or a Distinction in a University Examination, awarded to those who have not already won a named Law prize
Dr Arthur Jennings was a lecturer in the Veterinary School and a keen ornithologist. He was Senior Tutor between 1974 and 1980, and the Prize was established in his name when he retired.

For the best performance by a student returning to academic study after a break of more than 30 years
This prize was endowed by alumna Sonia Tunnicliffe and her husband Derek in recognition of  the support she received as a mature student.

For the best performance by a Wolfson student in the MPhil in Criminology
After reading Law at Gonville & Caius College in 1952, Joseph (Joe) Petty joined Wolfson as a mature student in 1990, reading for the MPhil in Criminology.  He was very generous in his support of the College, with beautiful gifts of silver, and was also a member of the Morrison Society.  His legacy has enabled the College to establish both the Joe Petty Prize, for Criminology students, and the Joe Petty Bursary.

For the best first class performance by an undergraduate in Part I of the Law Tripos
Visiting Fellow, Professor Irene Ng, has established an annual prize for Law in the name of her father, Dato Ng Kong Yeam, who is an eminent lawyer in Singapore and Malaysia.

For the best MPhil performance in History (or the arts, humanities or social sciences, excluding Law)
Charles Carlton was Professor Emeritus of History at North Carolina State University and a frequent Visiting Fellow at Wolfson.