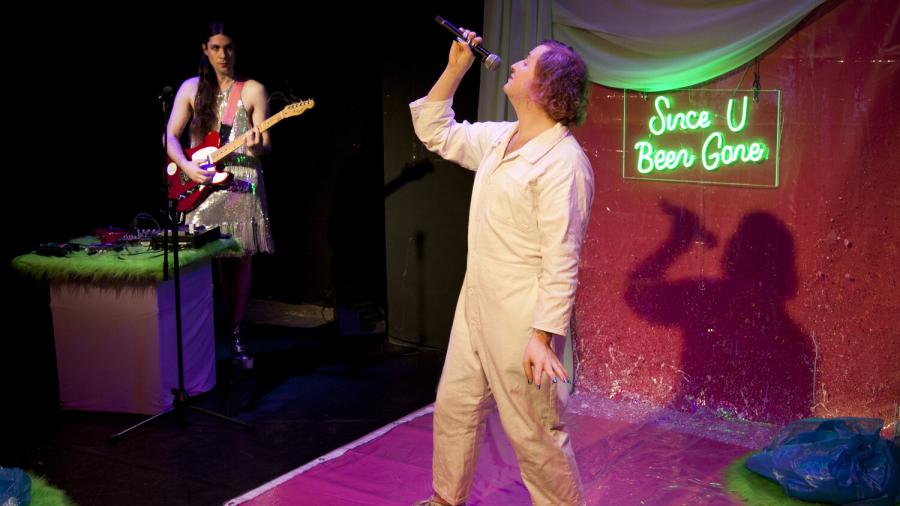 Wolfson College presents ‘Since U Been Gone’ in observance of Transgender Awareness Week, followed by Q&A with Playwright & Performer Tabby Lamb. Register here.

‘When friends die and pronouns change, what's left of the memories that don't fit anymore?’

In observance of Transgender Awareness Week (13-20 November) Wolfson College hosts an online screening of ‘Since U Been Gone’ (55 min.) on Friday, 20 November, at 6 pm, followed by an online Q&A with writer-performer Tabby Lamb. The film to be screened is a recording of Lamb’s ‘rapturously received debut’ at the Edinburgh Fringe in 2019, a production described in the Guardian as ‘a delicate monologue grappling with grief and gender’. The date of the screening marks the International Trans Day of Remembrance, which honours the memory of transgender people who have lost their lives in acts of anti-transgender violence.

The College will also fly the Trans Pride Flag to mark the Trans Day of Remembrance.

"I am delighted that the Wolfson College Students' Association and the Wolfson College Interdisciplinary Research Hub on Gender are co-sponsoring an event in honour of the Trans Day of Remembrance and that we will be flying the Trans Pride flag on this day. The College is committed to supporting its transgender and gender non-conforming students: they are valued members of our diverse and inclusive community."

Watch the trailer for the screened performance here and, register here to receive the link.

Tabby Lamb is a non-binary trans femme writer and performer based in East London and a graduate of the Theatre Directing course at Dartington College of Arts. Equally inspired by Carly Rae Jepsen and Tennessee Williams, she strives to tell stories that explore the intersections between popular culture and politics. Their debut solo show SINCE U BEEN GONE, which Tabby wrote and performed, premiered at the Edinburgh Fringe Festival 2019, after previewing at the Gate Theatre. They were part of the Soho Theatre Writers Lab and the LGBTQ Arts Review #RaisingOurVoices scheme for queer and trans writers. She is currently under commission at The Unicorn Theatre, The Place and 45North. Alongside their passion for writing, Tabby is a facilitator and runs creative arts projects for young people from the LGBTQ+ community. See also their recent publication, ‘Non-Binary People Like Me Won’t Fit In Until We Change Our Exclusionary Language’.

Please be aware that this performance contains sexual content, reference to mild drug use, references to self harm, suicide and transphobic language.  It also contains flashing lights and loud music.

Sustainability services: the most important ecosystem no one knows about