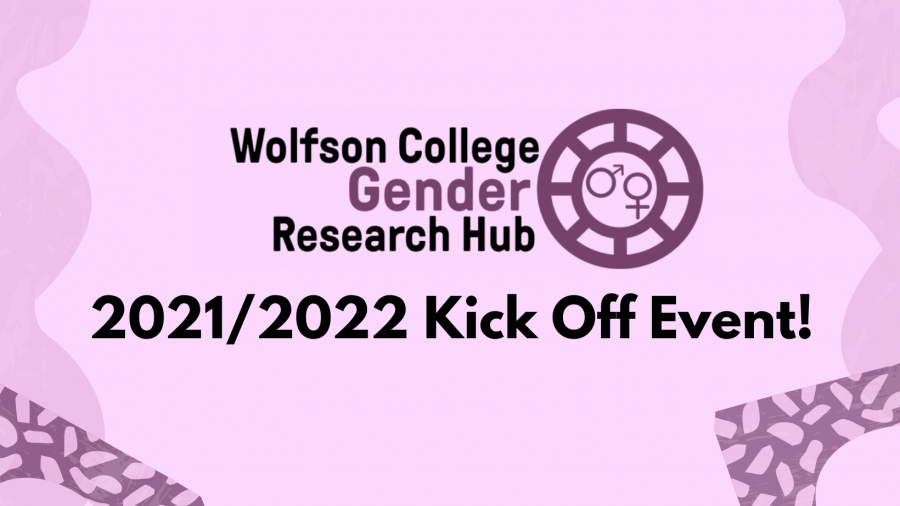 After a successful first year, Wolfson College's Gender Research Hub is thrilled to start planning another year of programming beginning with our 2021/2022 Kick-Off Event!

You’ll hear from Hub members about the impacts we’ve had over the past year, and learn more about the gender-focused research being conducted by current students. The event will be followed by an informal social at the College Bar (in the club room) from 19.30 onwards, where you’ll get a chance to chat with us and meet other interested students!

Allysa has been a driving force behind the Gender Hub over the past year, most notably planning and hosting the second instalment of college’s annual International Women’s Day Conference. Her research examines the gendered elements of extremism, harm, and violence in the online sphere, with a focus on the incel community and other subcultures that make up the Internet manosphere. In addition to chairing the event, she’ll speak about the accomplishments of the Hub since its inception in 2020, while touching on her own experience with planning and organising virtual events during the pandemic.

David Sanchez Garcia, MPhil in the Sociology of Marginality and Exclusion, 2021

A recent Wolfson graduate, David’s research examines how the construction of prostitutes as victims without agency and their exclusion from the state are related to issues of borders, punitivism, biopolitics and the construction of modern citizenship in Spain. Drawing on discourse analysis and a wide variety of sources, he proposes that dominant representations of prostitution legitimise the criminalisation of sex workers and undocumented migrants, exacerbating their vulnerability while expanding the reach of police powers. Attentive to the notions of militant research and critical reflexivity, and as a co-organiser of the Wolfson Gender Research Hub and Wolfson LGBTQ+ Officer, David organised several talks on gender-related and LGBTQ+ topics, including a panel with 8 sex workers and activists from 5 different countries called “Sex Work and Borders: International Sex Workers' Rights Day”.

Anna will reflect on how being part of the Wolfson College Gender Hub intertwined with her Ph.D. research framed in the history of Western feminist political thought. She’ll explain how important it was for her to organise the
Beyond Borders: Women’s Movement Around the World panel in May 2021, featuring academics and activists that discussed feminist movements outside the Euro-American world. Through that experience, she got in touch with very different research contexts and feminist methodologies, and learned new practical tools to decolonize her academic approach and position as a researcher.

The borderland region of North-East India has often been described as a ‘blindspot of history’ and one among the many ‘geographies of ignorance’, i.e., sociopolitically liminal zones located between the interstices of various post/colonial nation states in South and South-East Asia. It is both strategic to the Indian nation but also only tenuously and precariously governed, with a consistent history of militarisation and conflict during both colonial and post-colonial periods. Because of its distinct, peripheral geographical and political position, the region has fallen through the cracks of the dominant scholarship framed around nation-states and area studies, and/or been erased or grossly misrepresented. Lily’s presentation will bring into focus the works of three indigenous female writers from the region — Mamang Dai (Adi tribe), Easterine Kire (Angami Naga tribe) and Janice Pariat (Khasi tribe), who write to and against the dominant historical discourse on the region. She will explore the ways in which these writers create an individual yet corresponding literary register by amalgamating the region’s oral traditions and collective memory in order to interrogate and intervene in the written histories of the region.

After a successful first year, Wolfson College's Gender Research Hub is thrilled to start planning another year of programming beginning with our 2021/2022 Kick-Off Event!