Wolfson College Choir is a friendly group of between 35-50 non-auditioned singers from across the College community.

The Chamber Singers is a smaller group of 15-20 singers drawn from the main choir. This smaller group is by invitation/audition only.

During the pandemic we offered a blended choir membership with a mix of live and zoom rehearsals and we now look forward to returning to a more normal routine. Virtual Choir videos made during lockdown can be found here 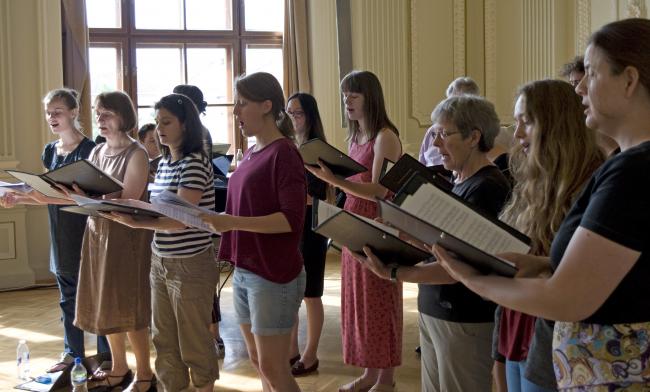 Wolfson Choir is a mixed choir which draws its membership from across the College community. All College members are welcome to attend. There are no auditions for the first term, but enthusiasm, commitment and a basic ability to sing in tune are expected. There is a short vocal assessment once new singers have served one term to assess whether a singer should continue in the choir. The Choir does fewer services/events than many other college choirs, suiting the busy schedules of graduate students and those who might also sing elsewhere.

The main SATB choir rehearses each Monday night during term from 19.30-21.30 in the Lee Hall at Wolfson.

We usually perform at least one concert and one service per term as well as singing at the College summer garden party and occasional external events such as the University Sermons. In Michaelmas term we also sing at the Advent Carol Service at St Mark's Church in Newnham. Our summer tours usually happen every few years (paused during COVID)  including tours to Hungary, the south of France, Thessaloniki and Rome.

Other past events include singing on BBC Songs of Praise, being invited to join the congregational hymns in the BBC TV programme 'Easter from King's, performing in Mahler's Symphony of a Thousand at Ely Cathedral, and joining a massed university chorus to accompany Simon Keenlyside in a performance of Vaughan Williams's Five Mystical Songs at the BBC Proms, to celebrate the University's 800th anniversary. We have also joined forces in a 'massive' performance of Handel's Messiah at the Royal Festival Hall in London with The Sixteen choir and orchestra, conducted by Harry Christophers. Guest speakers have included the world-famous Medieval vocal group, Gothic Voices

Our repertoire is a mix of sacred and secular, ranging from the Renaissance through to the twenty-first century, including lighter music for garden parties and dinners. Recent works performed include: Chilcott - The Making of the Drum, Ramirez Misa Criolla, Purcell's Dido & Aeneas, Fauré Requiem, Britten Hymn to St. Cecilia, Purcell Ode on St. Cecilia's Day, Haydn St. Nicholas Mass, Handel Messiah, Mozart Requiem, Brahms Ein deutsches Requiem, Finzi In Terra Pax and Rutter Gloria. Most of the larger scale works are performed with a chamber orchestra or ensemble, or brass ensemble. Please contact the conductor at wolfson.cam.ac.uk for further information.

A smaller group (Wolfson Chamber Singers) is drawn from the ranks of the College Choir to perform at dinners, weddings and other functions. Participation in this group is by invitation, although new members of College with considerable singing experience are encouraged to contact the Director of Music for an audition.

Both groups are conducted by Lyn Alcántara, Wolfson's Director of Music. A professional mezzo soprano, originally from Australia, she was a member of the BBC Singers, the UK's only full time professional chamber choir for almost a quarter of a century. She also sang regularly as soloist and chorister with the Monteverdi Choir and numerous choirs and opera companies including the Victoria State Opera and  English National Opera.

She has lectured for many years on Vocal Health and Pedagogy, and was Coordinator and Leader of the Vocal Pathway of the MMus in Choral Studies at the Faculty of Music. From 2008 until COVID she taught singing to the world-famous choristers of King's College Choir preparing singers for solos for the annual Christmas broadcasts, recordings and concerts.

She currently teaches Choral Scholars across the university and in particular at Sidney Sussex and Queens' College, in addition to Wolfson. Her voice pupils are accepted onto post-graduate courses around the world and have sung with groups including The BBC Singers, Tenebrae, Voces 8, and Welsh National Opera. One of her private pupils won the 2015-2016 BBC Radio 2 Young Girl Chorister of the Year. She is the founder and conductor of King's Junior Voices, a local community children's choir and music charity. Lyn has taught or given singing workshops for the BBC Proms, The BBC Singers, BBC Scottish Symphony Orchestra, SingUp, The Australian Boys' Choir, The Young Voices of Melbourne, The King's Singers, Britten Sinfonia and The National Youth Choir of Great Britain.