Sumantra (Shumone) Ray is a licensed Medical Doctor as well as a Registered Nutritionist (Public Health), with special interests in Nutrition Education in Health Systems and Cardiovascular Disease Prevention. Since 2008 he has been Founding Chair and Executive Director of the NNEdPro Global Centre for Nutrition and Health. In 2018 Shumone became the Co-Founder and Chair of BMJ Nutrition, Prevention and Health. 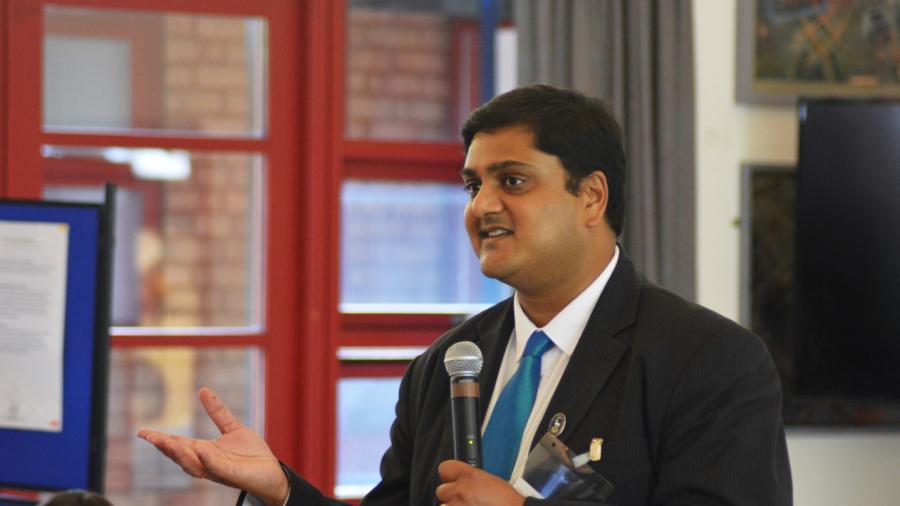 From 2008-2010 Shumone was an NIHR Public Health Fellow and Corfield Scholar at Selwyn College Cambridge. Following this from 2010-2018, he also held a Senior Clinician Scientist position with the Medical Research Council focussing on nutrition and vascular studies, heading up a dedicated experimental medicine facility for human nutrition studies and also functioning as the Lead Clinician for the UK National Diet and Nutrition Survey (c/o Public Health England) as well as working clinically at Cambridge University Hospitals. From 2010-2018 Shumone led undergraduate Nutrition teaching in the Cambridge clinical/medical curriculum and he was a University of Cambridge Senior Clinical Tutor from 2015-2018.

In 2015 Shumone was elected as a governing body Fellow of Wolfson College as NNEdPro won the Complete Nutrition Outstanding Achievement Award and Shumone was appointed as Adjunct Professor at University of Waterloo in Canada as well as receiving a Griffith University Visiting Fellowship from Australia.

In 2016, Shumone was appointed as Visiting Professor at Imperial College London as well as Ulster University in Northern Ireland and NNEdPro was a finalist and runner-up in the 2016 BMJ Awards. Also in 2016, Shumone published the Oxford Handbook of Clinical and Healthcare Research aimed at strengthening basic research skills across the global health-related workforce and became Programme Director for the Cambridge Summer School in Applied Human Nutrition.

In 2017 Shumone was elected to an Honorary Professorial Fellowship at the University of Wollongong Australia whilst NNEdPro won the Medical Nutrition Industry International Award in conjunction with the European Society for Parenteral and Enteral Nutrition. Also in 2017, he became Co-Lead for the Food, Nutrition and Education Work Package for the TIGR2ESS Programme in India (2017-2021) led by the University of Cambridge and supported by UK Research and Innovation's Global Challenges Research Fund.

In 2018 he was appointed as Course Director in Nutrition Science at the University of Cambridge Institute of Continuing Education. Also in 2018, Shumone became the Founding Co-Chair, along with the British Medical Journal (BMJ) Group, of BMJ Nutrition, Prevention and Health. He was also invited to lecture at the University of Brunei Darussalam under their 'Eminent Visiting Professorship' scheme in 2018.

More recently, in 2019, he was appointed as Honorary International Dean to the Cordia Colleges in India and recognised through invitation to speak as an 'International Visiting Professor' to the University of Sao Paulo in Brazil. In 2019, he has also been appointed as a presidential Council Advisor at the University of Parma School of Advanced Studies on Food and Nutrition. Over 2019 Shumone is also serving part-time as a Consultant on special assignment to the Nutrition Directorate of the World Health Organization Headquarters in Geneva leading on the development of a strand of work in nutrition and healthcare capacity building within the United Nations Decade of Action on Nutrition 2016-2025.

From October 2019, Shumone has been appointed to the fractional position and title of Director of Research (Food Security, Health and Society), within the University of Cambridge School of Humanities and Social Sciences.

The principal aim of Shumone's work is to improve nutrition-related health outcomes by training professionals, strengthening research, implementing solutions and addressing inequalities, in line with the United Nations' Sustainable Development Goals and the Decade of Action on Nutrition 2016-2025.