Nicholas is a Clinical Lecturer and Honorary Specialist Registrar in Stroke and Geriatric Medicine. His research involves imaging of the brain and blood vessels in individuals with cerebrovascular disease and stroke. 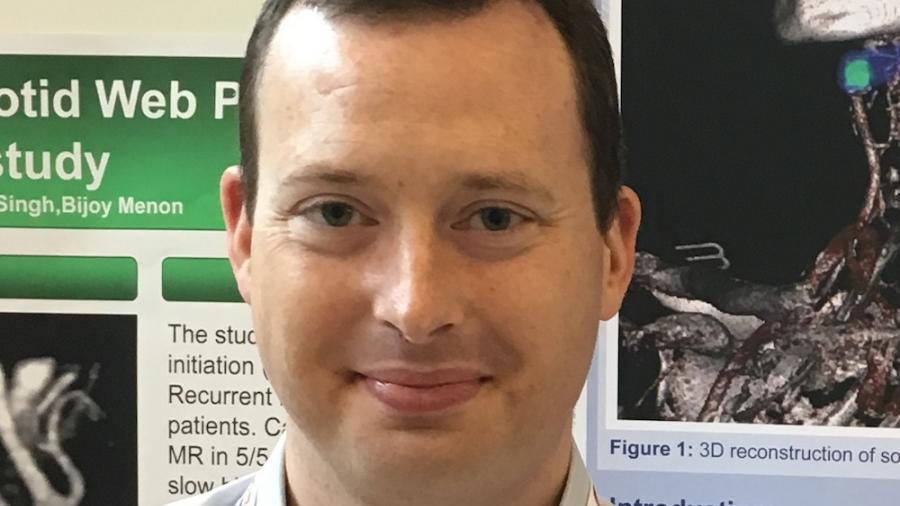 Nicholas qualified with his medical degree from the University of Cambridge (Sidney Sussex College) in 2008. After completing his early training at hospitals around the East of England, he started his specialist training in Stroke and Geriatric Medicine in 2012. He returned to Cambridge (Gonville and Caius College) in 2014 to undertake his PhD in Clinical Neurosciences as a Dunhill Medical Trust Research Training Fellow. Since 2018 he has been an Academic Clinical Lecturer continuing his research into the imaging of atherosclerosis and cerebrovascular disease. He has also undertaken further postgraduate training at the University of Dundee and Harvard University.

Nicholas is an enthusiastic medical educator, having delivered clinical supervisions for over a decade and teaching regularly on the clinical medicine course. He is the joint lead for Cambridge’s INSPIRE scheme (supported by the Academy of Medical Sciences and the Wellcome Trust) that aims to promote research skills and participation amongst students. He has co-ordinated examinations for the School of Clinical Medicine and served on the Faculty Board. Nicholas is also a tutor on the Postgraduate Certificate in Medical Education at the Institute of Continuing Education in Cambridge, and a Fellow of the Higher Education Academy.

Nicholas’ research involves the imaging of atherosclerosis, the hardening of arteries due to the build-up of cholesterol. Atherosclerosis in the carotid arteries – the main blood supply to the brain – is a major cause of stroke, where damage to the lining of the blood vessel causes blood clots to form that subsequently break off and block downstream blood vessels within the brain. By using specialist imaging techniques – positron emission tomography (PET) and magnetic resonance imaging (MRI) – Nicholas’ research is able to identify areas of atherosclerosis that are at a high-risk of causing stroke. This work has also illustrated how disease in the arteries – in particular inflammation – may be associated with chronic changes in the brain that are associated with vascular dementia. His current work explores this link further, as well as evaluating new treatments to treat atherosclerosis and reduce the risk of stroke.

Nicholas’ clinical research also considers the role of clinical frailty – the loss of physiological reserve – on outcomes after stroke, and how vascular ageing influences this.

He is also active in medical education research; investigating the dual role experienced by medical educators who are also doctors in training, and how this influences their own professional development. He also has interests in the use of simulation-based education and the association between selection metrics and subsequent performance in medical education.

Nicholas has spoken regularly on stroke and cerebrovascular disease at the Cambridge Science Festival and Festival of Ideas, and has spoken about his work in national print and television interviews.