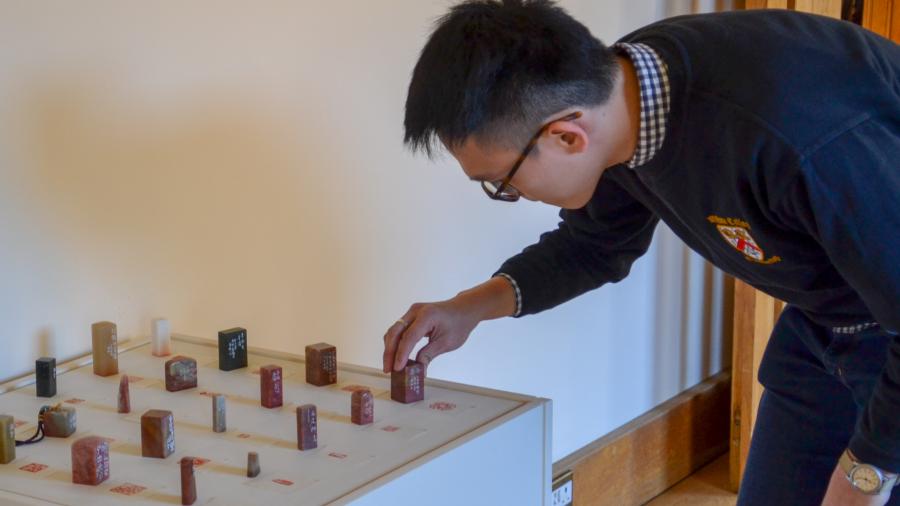 The collection of Singaporean paintings and prints currently hanging in the dining hall and gallery were selected mainly from the Lee Seng Tee Collection of Wolfson College, and includes other contemporary works by Chinese and Singaporean artists. But if you visit the Diasporic Brush exhibition before it closes at the end of this month (and you should), don’t mix the perspex box tucked into the corner of the gallery. It holds smaller treasures — the exquisite seal-carvings of the The Siaw-Tao Chinese Seal-Carving, Calligraphy and Painting Society.

Carved seals originated thousands of years ago in China, where they were used to sign important documents. Seals are small decorated stones with a signature cut into the flat base. This base is dipped in red ink and then used to stamp the signature on paper.

The works in the Diasporic Brushreflect a variety of political stances and citizenship identities in the Chinese and Singaporean diaspora, exploring changing meanings of ink and identity. Traditional forms of craft from China, Singapore — even Japan and Bali — find their way into shifting customs and culture, and hence into the artistic expression of the diaspora. What these diverse pieces share is a common need to express the tension between the lived reality of the artist and cultural orientation through art.

A similar tension was felt by one of the most famous poets to be associated with Cambridge, Xu Zhimo, the Chinese poet who studied here in the 1920s. Whilst here Xu became fascinated with English Romantic poetry and, on his return to China, strove to loosen Chinese poetry from traditional forms and forge a new tradition influenced by Western poetry and the vernacular Chinese language. Two of the seals carved by Yew Tong Wei (who himself spent time in Cambridge during his medical studies) reference Xu’s most famous poem, Leaving Cambridge.

Quietly now I leave the Cam,
As quietly as I came.
Gently wave farewell the clouded
Western sky aﬂame —

Leaving Cambridge expresses a feeling of romantic and indeed Occidentalist impressions of Cambridge by a Chinese who sought the keys to modernity in the West. Yew has taken phrases from the poem and amplified their meaning with pictorial carvings in these seals made from Laotian stone.

Even summer insects keep silence for me depicts a small beetle:

But as for me, I cannot sing
this muted summer’s evening;
Even insects hush, as silence
plays the ﬂute for leaving.

Nostalgic Cambridge shows a person punting, a tradition favoured by generations of Cambridge students (and tourists). But the shape of the boat in the carving also calls to mind traditional Asian fishing rafts, also punted with a push pole. The natural S-curve in the stone can be seen as the River Cam itself.

Several of the pieces in the exhibition are on sale; for more information, contact curator Yong Jun Tan or the Fine Arts Committee.

This exhibition was curated by Yong Jun Tan in honour of Dr Lee Seng Tee, FBA and major benefactor of Wolfson College. This year, we wish Dr Lee well on the occasion of his 95th birthday on 16 April.