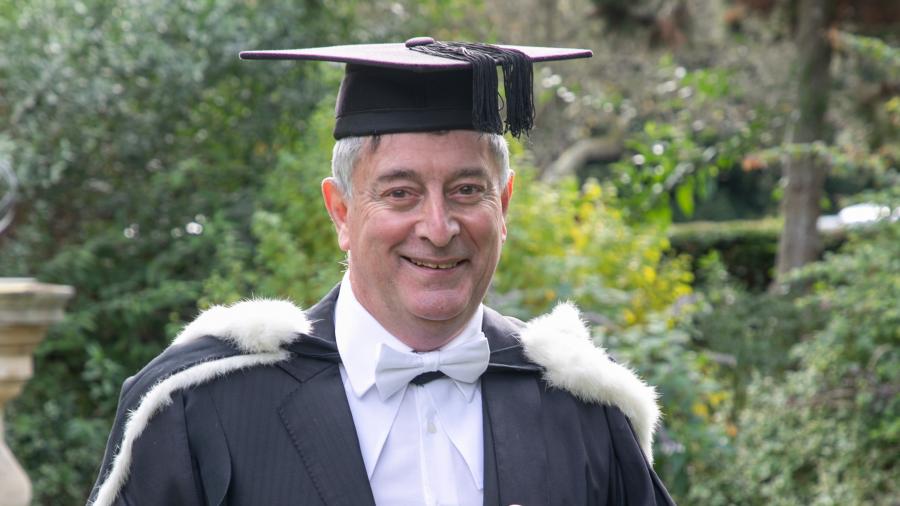 Chris previously studied at Wolfson in the 1970s, graduating with a degree in Education in 1976. While at Wolfson, he was Chairman of the Drama Society and involved in three different productions, including The Real Inspector Hound by Tom Stoppard.

Now, over four decades later, Chris is back as a part-time student on the The Master of Studies (MSt) Writing in Performance programme – and once again deeply involved in performance at Cambridge.

Last weekend’s performances, part of the Hotbed Theatre Festival 2022, were no-holds-barred monologues, the only rules being that they must be a maximum of eight-minutes long and touch on the theme of ‘Past, Present, Future’.

Developing as a playwright

Chris has previously delivered a number of workshops on playwriting himself, and has won a number of prizes as playwright, director, and short story writer. He also started Murder Mystery Players in 1996. However, for Chris, returning to study at Wolfson as a mature student is central to his progression as a playwright.

“I must have one of the longest periods between two degrees,” he says. “I chose the MSt course for a number of reasons. My primary career has always been as an educationalist, but I have had a secondary career as a writer of plays. Having completed my M.Ed. in Educational Leadership and School Improvement in 2020, the natural progression for me was to move departments and focus on Writing for Performance, where I have learnt more about the art of playwriting, which has involved both creative and academic aspects.

“It has been a great experience to work with other professional actors, directors, playwrights and screenwriters. It has been this learning and development, as well as the learning and sharing from other students, that I have loved.”

Since leaving Wolfson in 1976, Chris has taught at both primary and secondary level, led schools in England and Dubai as Head Teacher and School Principal, and lectures in Education on a part-time basis for the University of Connecticut. However, now is the time to take his passion for playwriting even further.

“I am now focussing my energies on my interests as a writer,” he says, “so leaving School Principalship behind has given me the time to take this part of my life forward. I know it is a cliché, but we never stop learning, and I think that this thirst for knowledge is what keeps us young at heart.”

As much as playwriting is a big part of his life, Chris was also passionate about returning to Wolfson too.

“Another issue for me in choosing the course was my long-standing connection with Wolfson,” he says, “so continuing to be part of the college community was definitely a strong factor.

“On each of the three occasions I have applied to the University, I have put Wolfson as my first choice college. Why? Because I have always found it to be so friendly and welcoming, preserving the traditions of Cambridge whilst, at the same time, embracing an ever-changing world which values difference, whilst maintaining the highest of standards. I love the College.”

When not a part-time student at Wolfson, Chris is a lecturer for the University of Connecticut, in Education Cultures. As part of the course, his American students, who visit England for a term, work in schools and attend lectures.

“As part of my course programme, I built in a day when the students travelled up from London to visit Wolfson,” he says. “I set up two panels of Wolfson students who were interviewed by my University of Connecticut students. My students loved that day here in Cambridge. Thank you so much, Wolfson!”

Wolfson College has more part-time students than any other Cambridge college. We have College Tutors dedicated to part-time students, who facilitate students’ involvement and who provide advice on personal and non-academic matters.

You can find out more about part-time study at Wolfson on our dedicated Part-time Students page.