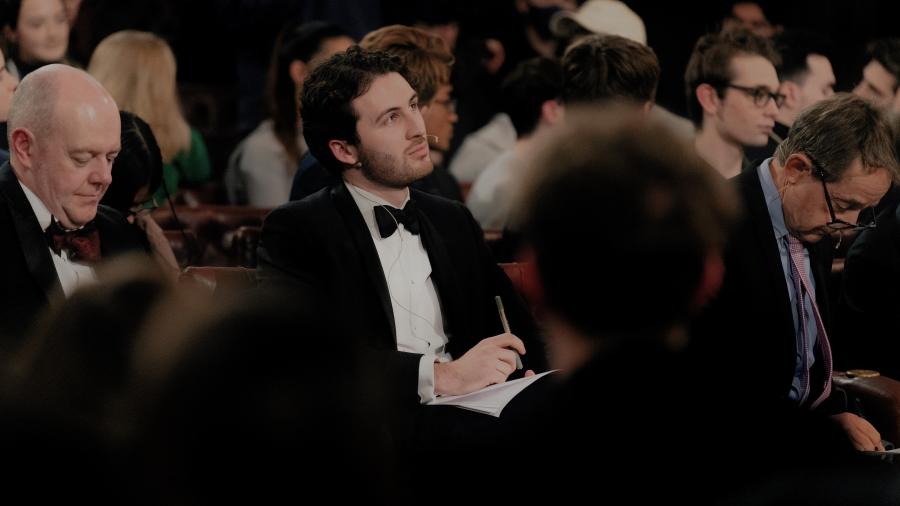 Wolfson History undergraduate Christopher George has been elected President of the Cambridge Union for Lent Term 2023.

Christopher is the first student from Wolfson, or any of the mature and post-graduate only colleges, to have held the post in the Union’s 207-year history. Elected by members, he will head a team of over 150 students and staff.

Christopher says he is honoured to be heading up the oldest debating society in the world and the largest student society in Cambridge.

“The purpose of the Union,” he says, “is to bring in new and different ideas, to challenge them and, importantly, to be challenged by them. We’re not an echo chamber. You’re meant to hear from people you disagree with, but in turn they have to listen to you.”

While he acknowledges current polarisation of views, he’s clear that confronting those differences openly and respectfully is the best way to achieve positive change.

“The principle of civil disagreement is at the core of democratic progress,” he says. “By providing an appropriate space for it, new ideas can be spread and as a society we can get better.”

Christopher has already served as Events Manager and Debates Officer at the Union, and he believes those experiences have given him a vantage point to identify the areas where he can most add value.

“I believe we can make things better,” he says, “we can improve how we run things, be more open to members, but people overlook that sometimes fixing the small things can make a big difference.”

Christopher has no illusions that he is taking on a big role.

“You’re taking on a lot,” he says. “You have to love the place. You’re not just looking after other students, officers, and guests. There is the Listed building, the bar, the whole business side as well. I’ve also had to make sure I plan my degree around taking on the role.”

He also says there isn’t as much time for socialising and spends less time in Wolfson’s “brilliant bar” than he might otherwise.

The Union has an extensive tradition of hosting prominent figures from all areas of public life, including the Dalai Lama, President Ronald Reagan, Bill Gates, Stephen Hawking, Prime Ministers Winston Churchill, Margaret Thatcher, and John Major. And it has sometimes found itself the focus of national media attention too.

“It’s odd when you see your name in Varsity or when people come up to you asking what our plans are for this or what we will do about that, but I’m in this because I really believe we can always get better – so I accept what comes with it.”

Christopher credits Wolfson as having been central to his time at Cambridge, enabling him to hear a “more diverse range of perspectives” than if he’d gone somewhere else.

“Everyone here has a story tell,” he says, “when you meet someone for the first time, you don’t talk about what you did for A Levels, but rather what you’ve spent the years since doing.

“There is a brilliant community here. The All Greys rugby team is my personal highlight, but students here are involved in the ADC Theatre, Footlights, Varsity, and loads of other activities both in College and across the University.”

Christopher’s personal and political views developed while he was in UC Berkeley, where he studied Public Policy and Political Economy for a year before coming to Wolfson. At 2021 Wolfson Research Event, he honed in on conservative national identity and its role in American polarisation.

It’s clear that his research interests in History are equipping him not only for his position as President of the Cambridge Union, but maybe other positions further down the line. The Union might just be the start.