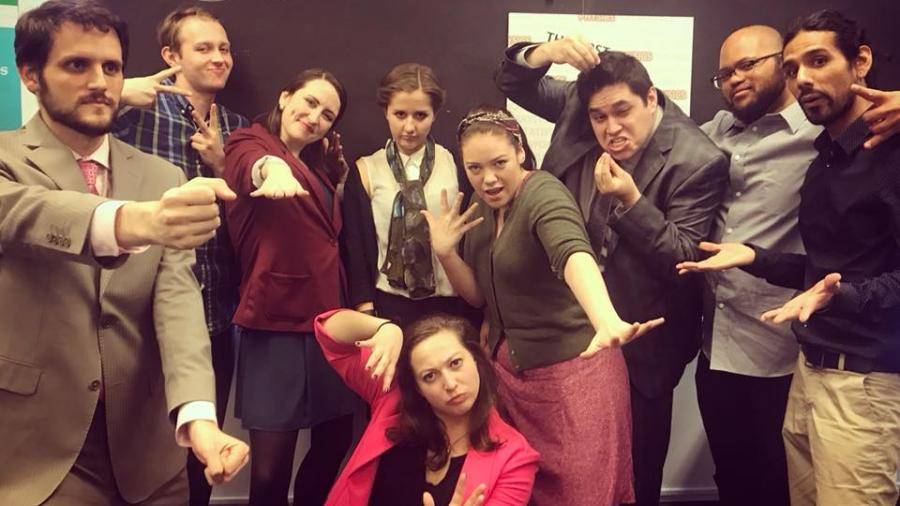 Science and stagecraft might not seem to be natural partners, but in the scriptwriting hands of former Wolfson PhD student Andrew Goldman, they combined to make a musical about life in the lab.

Written when Andrew was doing his MPhil and then PhD at the Centre for Music and Science, Science, the Musical follows Janice, an enthusiastic PhD student in a social psychology laboratory and features such numbers as 'The Interdisciplinary Rag', 'Publish or Perish' and 'Yes Yes, SPSS'.

First produced in 2014 at the Corpus Playroom, the musical was performed last week at the Fayerweather Hall in New York, where Andrew is now Adjunct Assistant Professor at Columbia University. We asked him about the production.

The genesis of the original musical was a reflection on the "pressures of the professional academic world". How much of your personal experience is reflected in Janice’s adventures?

Quite a lot is based on specific experiences that I have had. Janice having her first paper accepted to a conference was based on my first time being accepted to speak at a conference. Janice sings, "In my twenty minutes (and eight for questions) I'll change their minds, I'll change their lives, my paper's been accepted!" Those were the real conference's time limits. Her interactions with the publishing kingpin Jay Wiles Blackly were based on a presentation I went by a journal that was touting its success and pressuring young scholars to publish early. The hegemony of neuroscientists in academia is pretty obviously represented in the play through everyone's reverence of Professor Jones (the physicist down the hall who got five papers out of a single experiment). Come to think of it, nearly all of it is based on my experiences in academia. I just took notes, and added a sound track.

Tell us about your PhD research.

My PhD presented a way that improvisation could be researched using cognitive science. Different musicians learn about musical structures in different ways, some of which facilitate the ability to improvise. Understanding differences in these ways of knowing can be made compatible with cognitive-scientific theories and experimental methods. I conducted experimental work, too, to support these theories.

What led you to Columbia and what are you working on now?

I was hired by Columbia University for a new initiative called the Presidential Scholars in Society and Neuroscience. The program pairs postdoctoral scholars with multiple mentors, at least one of whom is involved in neuroscientific research. The goal is to improve communication between neuroscientists and other scholars at the university. Neuroscientists are increasingly trying to explain human life, experience and society, so having better communication with scholars in the humanities is essential if we want to integrate scientific findings into broader discourses and to critically evaluate the findings and the scientific method. My project here is using EEG to investigate differences between improvising and non-improvising musicians in how they perceive and perform music.

How do you think the musical will appeal to an American audience? Are the pressures there similar to those you experienced at Cambridge?

I had to change some of the vocabulary (cookies replaced biscuits and undergrad replaced 'uni', for instance). There are certainly similar power dynamics between the sciences here, so I think the jokes will still be funny. As Simon, a social psychologist, sings about the physicists, "They say that life's reductionistic. I say it's cats and candlesticks. You can't show me how my mind will work just in terms of fields and quarks."

My experience at Wolfson was an egalitarian one and thus shaped my understanding of academia to be an open place where people are free to criticize ideas (sometimes in musical theatre form). I think there is a similar desire here to poke at these boundaries. As Janice reflects, "Surely they're in it for more than the free coffee?".

Any more musicals in your future?

I certainly hope so. Musical theatre performance has honestly been the most fulfilling artistic endeavor I've had. The team we have here is so talented, creative and hard-working, and the staff from the Center for Science and Society (which is sponsoring the performance) has invested so much effort into the success of the show with logistics and marketing. Because no one player in the show can do all of the separate roles, it is truly an interdisciplinary collaboration, which is why I find it so rewarding. You have to cooperate with people with different skills, but it all unifies on stage. As The Professor sings, "Life's an interdisciplinary rag!".

During his time at Wolfson, Andrew was also a member of the Wolfson College Choir and performed as a soloist and chamber musician.