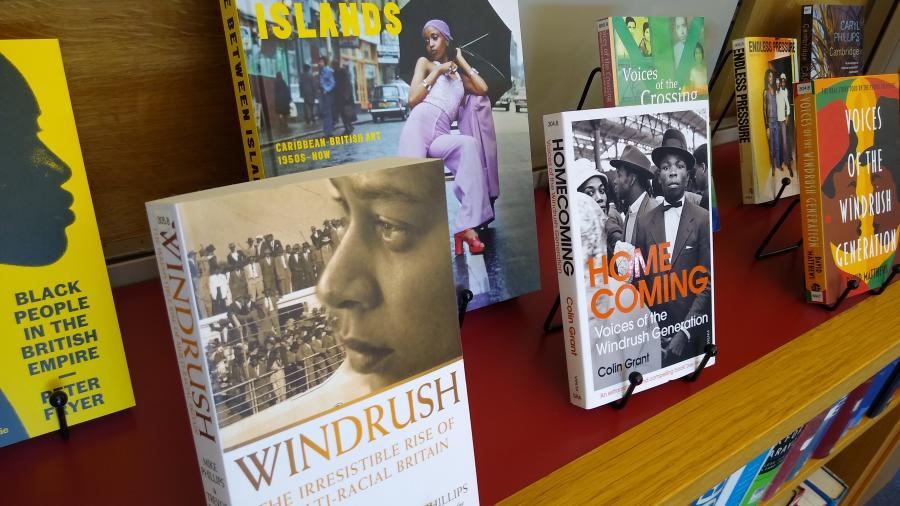 Wolfson's Lee Library is showcasing a selection of books for Windrush Day to celebrate the achievements and contributions made by the Windrush Generation and their descendants.

"Windrush Day" celebrates the arrival of over 500 Caribbean people who travelled to the UK on the Empire Windrush ship on 22 June 1948.

“A significant number of those who arrived on the Empire Windrush were patriots who exercised their rights as British citizens to reside in this country, and by doing so they and their children made a host of positive contributions to British society. This makes it even more important that we all continue to celebrate, commemorate, and acknowledge Windrush Day.” - Dr Kenny Monrose

The Lee Library display contains books about migration to and settlement in Britain from Caribbean countries. Some detail first-hand accounts of travellers from the Caribbean, others look at Caribbean-British art, modern-colonial literature, as well as academic texts addressing race and race relations in Britain.

Students and members can view and borrow the books in the Library, or see them in our online exhibition on Pintrest, which links to online copies where they are available.

Dr Kenny Monrose, Fellow of Wolfson College and convenor of the recent Post-Windrush Generation conference (sponsored by Wolfson College), has provided an overview of several books from the display that he particularly recommends.

You can click on the titles below to read more.

The story of black people who resided in Britain during the Second World War often escapes attention. Bourne, however, superbly chronicles the contributions of West Indians in an insightful and accessible manner. The triumphs of pioneers such as Lillian Bader, Una Marson, Learie Constantine, and 'Britain’s Martin Luther King', Dr Harold Moody, during the war effort is illuminating.

Bourne also gives voice to those who were prominent in civil duty and defence such as Esther Bruce and Amelia King, the latter of whom was refused entry to the Women’s Lands Army on account of her race in 1943. For those with an interest in black presence before the arrival of the Empire Windrush, this text provides a helpful insight.

In 1969, Beryl Gilroy became one of London's first black female head teachers. Black Teacher, originally published in 1976, is a reflective account of the ugliness of racial discrimination that thrived within educational administration and governance during the 1960s. It is written autobiographically and provides an intimate insight of the daily challenges faced by a black woman inside and outside of the workplace. Akin to the work of other so-called Windrush Renaissance novelists such as George Lamming, V.S Naipaul, and Sam Selvon, The Black Teacher is incredibly humorous and witty at times but cheerless and heartbreaking at others, thus capturing the rollercoaster existence of black life in post-war Britain.

Published in 1956, The Lonely Londoners was the first novel to offer an account of British life for early Windrush arrivals. Selvon skillfully strikes the balance of hilarity and wit and the painful burnt illusions experienced by the newly-arrived settlers, and the barrenness of their status as British citizens. Such commentary allows us to share their sense of loneliness and separation. The usage of West Indian  intonation and burr within the writing, or what Kamu Braithwaite refers to as nation language, provides a warm and welcoming familiarity of the stories of my parents and elders who spoke of their early arrival to the Mother Country.

There Ain't No Black in the Union Jack: The Cultural Politics of Race and Nation (Paul Gilroy, 1987)

There Aint No Black in the Union Jack by Paul Gilroy untangles the complex and often complicated matters of race, power, and class position in Britain and closely observes how they interact within parochial notions of nationalism. Writing the book in the 1980s was a huge feat of courage by Gilroy who unapologetically challenged the intellectual compliancy on race within academe, and forced scholars from either side of the political divide to reassess their positions. Gilroy’s style is meditative and his foresight is revelatory. His critiques and reflections make a valuable contribution to the corpus on race, meaning that this book has stood the test of time and is as relevant today as it was when it was written.

Dr Monrose has also recently published a monograph titled Black Men in Britain: An Ethnographic Portrait of the Post-Windrush Generation, which is available via Routledge and iDiscover.

“We’re really proud to be marking the occasion at the College and the Library. Working with Kenny Monrose, we have expanded our collection of books in this area. We hope that this encourages the Wolfson community to celebrate the contribution of the Windrush Generation and their descendants to all aspects of life in the UK,” said Librarian Laura Jeffrey.

In addition to the food for thought at the Library, there will be a special Windrush lunch menu in the Wolfson Cafeteria on Wednesday 22 June with Caribbean inspired dishes: including spicy sweet potato and coconut soup, goat and vegetable curries, and Jerk Chicken.