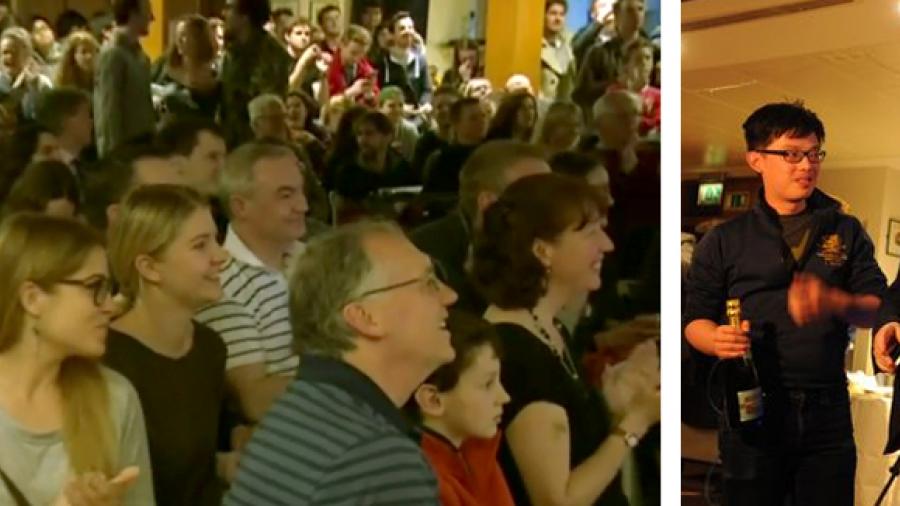 A huge audience of students, alumni and guests crowded into the Club Room to cheer on Wolfson's team in the Final of University Challenge last night, loudly cheering their correct answers.

Speaking to Cambridge News before the show, Justin Yang said: “It’s so exciting, it’s going to be a great night. ;" It hasn’t been too hard to keep the result a secret - but then no one really put the thumb screws on us.” Justin was joined by fellow team member Ben Chaudhri. Team Captain Eric Monkman and Paul Cosgrove were not able to be in Cambridge for the Final.

In one of the most electric of University Challenge finals, Wolfson and Balliol were neck-and-neck until a few minutes from the end when Balliol pulled ahead to win 190-140. Despite the result, the atmosphere in the Club Room remained uplifted, energetic, and most importantly, immensely proud.

At the end of the screening, Wolfson President Sir Richard Evans congratulated the team, saying there was "fantastic appeal seeing unbelievably clever people, who are yet, only in their early 20s, competing at this level", before presenting a bottle of champagne and a special Wolfson mug to Justin and Ben - which the other team members will also receive.

The presentation of the University Challenge trophy was made by Professor Stephen Hawking at Gonville & Caius College Cambridge. Professor Hawking told the two teams:

"I have said in the past that it is not clear whether intelligence has any long-term survival value - bacteria multiply and flourish without it. But it is one of the most admirable qualities, especially when displayed by such young minds. Many congratulations to both teams but especially to Balliol College Oxford on becoming series champions on University Challenge, a programme I have long enjoyed."

It was only the second time in the quiz's 55-year-history that the trophy presentation had taken place outside the studio. In the segment, Paxman congratulated the winners and told Wolfson there was "no shame in being runners-up". The teams then toasted Balliol's win with glasses of port.

The Final was featured on BBC Breakfast this morning and it is available on iPlayer until 09.15 on 12 April.

There are also clips on the Cambridge News website, the Canadian Broadcasting Corporation website and articles in most of today's national press and the Canadian Globe and Mail.

Photos courtesy of the BBC and Cambridge News