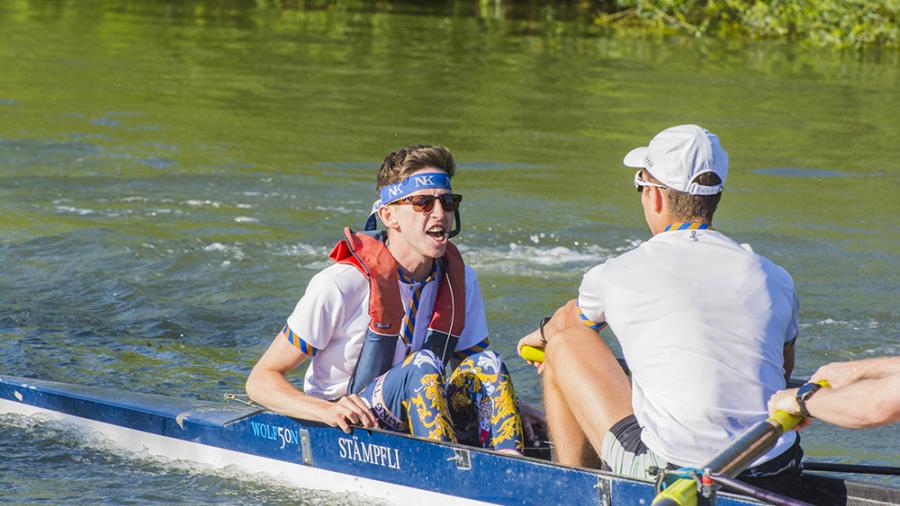 The Wolfson College Boat Club wrapped up a very successful year with a thrilling four days of May Bumps, with three out of four boats blading, and the Club winning the Pegasus Cup and the Michell Cup for the first time ever.

The victory was particularly special as this is the 50th anniversary of the Club, and many former rowers were at the Osier Holt on Friday to watch the races, and at the Annual Boat Club Dinner on Saturday.

Four crews entered the May bumps this year. W2 had a good campaign despite some challenges. A few key members were unavailable for some of the races and the competition was very strong but they rowed to a respectable -2 for the week.

W1 completed yet another strong set of races, bumping at every opportunity and claiming their blades for a second consecutive year. They bumped Pembroke II, Selwyn I, Murray Edwards I and Newnham II to move to 24th position overall and the highest rank our W1 has ever achieved.

M1 bumped on each day of the  races overcoming St Catherine’s I, Girton I, Churchill I and Lady Margret (St Johns) II. It was a gruelling campaign as each of the six rows they completed went almost the entire length of the course, however, by the end they moved up into Division One for the first time, to the highest rank of any Wolfson crew ever and were awarded their blades.

M2 had the most spectacular campaign of any crew. On the first day they had the misfortune to have the four crews directly ahead of them bump out, leaving Girton II, who started around 230m ahead, as their target. They overhauled this deficit with an inspiring display of technical skill and raw determination to record a historic double over-bump (5+ positions) With this spectacular start they proceeded to bump each day, advancing into Division Three, finishing with an aggregate change of +8 and winning their blades!

Owing to these strong performances Wolfson won both the prize for the most successful club in May bumps races (Pegasus Cup) and the overall trophy for the Boat Club for giving the best performance on the river during the academic year (Michell Cup).