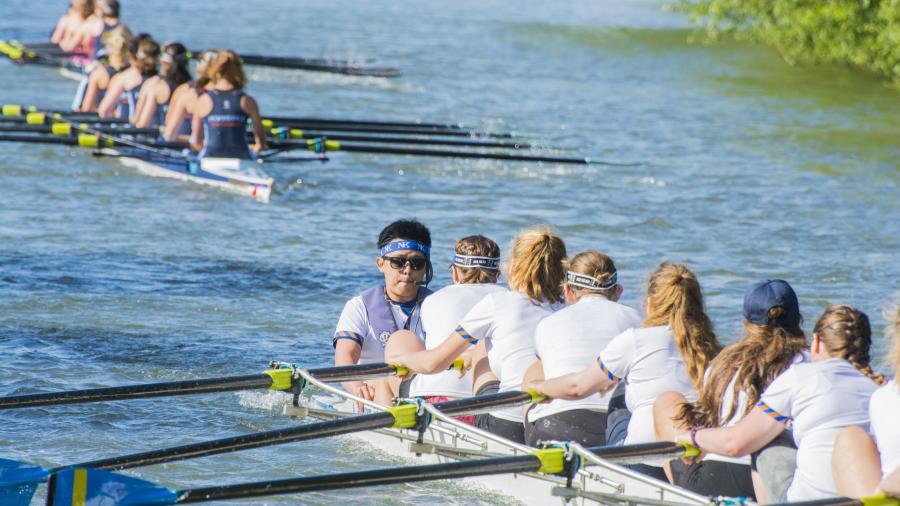 After months of intense training, Wolfson College Boat Club’s crews are aiming to excel in the highly anticipated May Bumps from 12-15 June, 2019.

Rowers and coxswains are drawn from Wolfson’s incredibly diverse community, representing all levels of study and ten countries. Wolfson will build upon its successes from 2018 where the club won the highly coveted Pegasus and Michell Cups, awarded to the most successful club in the May Bumps and best-performing club over the entire academic year, respectively.

Wolfson’s first men’s crew features national and internationally ranked oarsmen, capably coxed by club captain Michael Donnelly of Newry, Ireland. For the first time in Wolfson history, the first men’s crew is set to compete in the highly competitive men’s first division of the May Bumps alongside long-established clubs, including First and Third, King’s, and Lady Margaret. The crew will be stroked by Tiarnan Doherty, a four-time veteran of the Head of the Charles regatta, and includes: Tom Hewitt at 7, Dhruv Panchal at 6, Alexander Kohlhoff at 5, Tom Stell at 4, Jonas Thyregod Wilcks at 3, Tom Hilton at 2, and Harry Michalakakis in the bow seat. With over 50 combined years of rowing experience, the first men’s crew will be aiming to catch Selwyn on the first day in the Ring True.

With almost 20 combined years of rowing and a combined aggregate bumps score of +13, Wolfson’s first women’s boat features both experienced rowers as well as talented newcomers. Coxed by Edmund Lam from Hong Kong, the crew includes Muriel Schicketanz in the stroke seat, Kate Sanders at 7, Sian Bradshaw at 6, Nancy Karreman at 5, Anastasia Watson at 4, Kate Jones at 3, Sonny Smart at 2, and Sabrina Masur in the bow seat. Having won trophy blades at the Lent and May Bumps in 2017 and May Bumps in 2018, the first women’s crew are aiming to achieve their highest placement in Wolfson history for the first women’s boat in their new Stampfli, Lupa Regina. They will be chasing Lucy Cavendish on the first day and chased by Newnham II.

With no less than five crew members having noviced in the 2018 Michaelmas term, what Wolfson’s second men’s crew lack in experience, they make up for with enthusiasm, tenacity, and skill. The crew, rowing in the Sally Williams, will be coxed by Peiyao Lyu, and includes Julian Siebert in the stroke seat, Andrew Brooke at 7, Sharaf Hamid at 6, Jiaru Bai at 5, James Kent at 4, Christopher Lim at 3, Max Mulvany at 2, and Otis Illert in the bow seat. With rowers from five countries over three continents, the second men’s boat will be chasing Clare III on the first day and chased by Selwyn II.

Wolfson College Boat Club is generously supported by the Friends of the Wolfson College Boat Club, the group of alumni and supporters who contribute towards the club’s finances and operations. Their gifts and service to the club have ensured that the college rowers have been able to purchase the equipment necessary to remain competitive in the highly dynamic collegiate rowing scene and to afford training from highly experienced coaches. 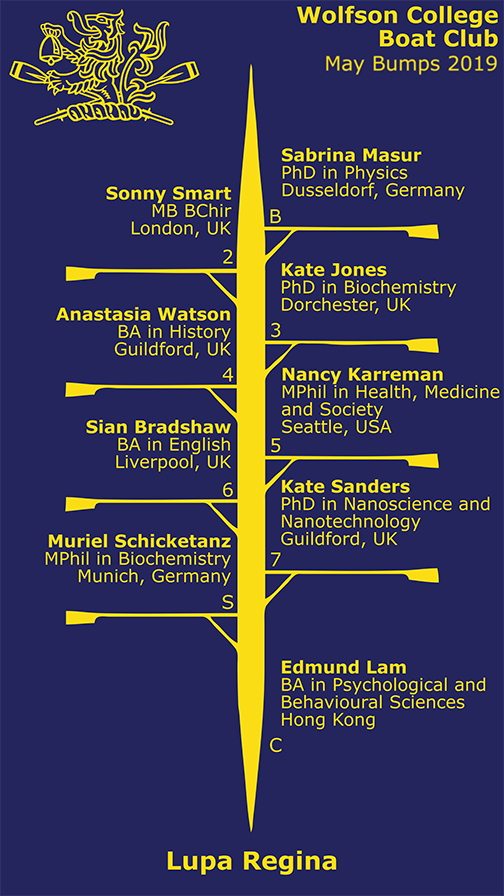 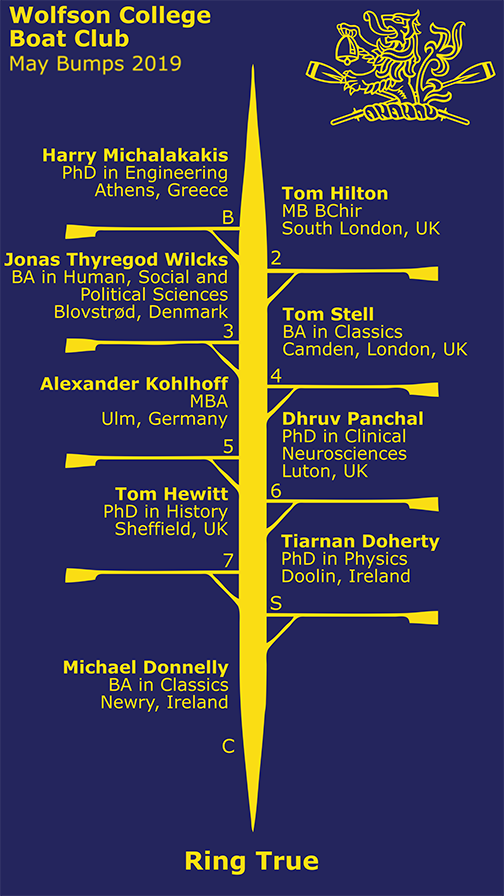 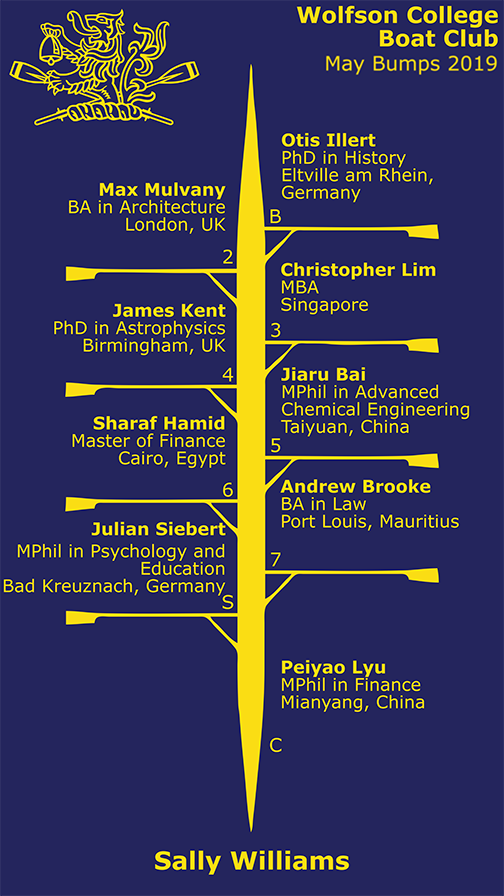