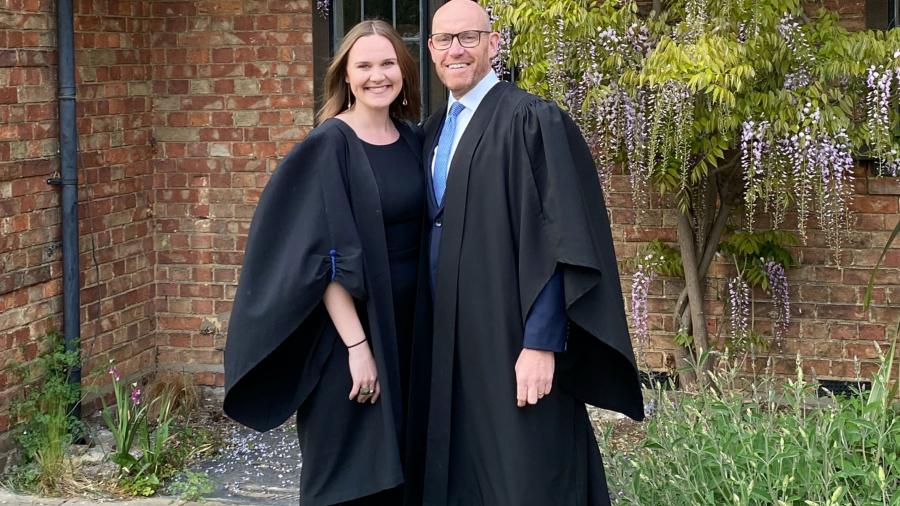 There is a strong tradition of Law study at Wolfson – and one family has even made it their own tradition to study here, with three generations having studied Law here since 1983.

This last academic year, Emma Siddall began her undergraduate Law degree at Wolfson, following in the footsteps of both her father, Kieran, and her grandfather, Keith Siddall.

Emma is working towards a Law BA (Hons) degree via the two-year Affiliate Programme, while her Dad received his Law degree in 1994, and her grandfather Keith achieved a Master’s in Law (LLM) at Wolfson in 1983.

There was certainly no pressure on Emma to continue the family tradition. “I didn’t sit Emma down and say you’re going to be a law undergraduate at Cambridge,” says Kieran. “But in the end she said, ‘Dad, it’s all I’ve ever really wanted to do’ – which of course made me really proud.”

Emma was born in Cambridge, but was two when the family moved back to Canada, where her father was born.

Growing up in Canada, being at such a distance from the University, and knowing the reputation of world-class excellence at Cambridge, the idea of coming to the University still felt unreal to Emma, even though she had two family examples to draw inspiration from.

“I’d always loved Cambridge, but it felt like a pipe dream,” she says, “it felt out of reach.

“I applied to many law schools in Canada and I remember applying to Cambridge sort of on a whim. As part of the application process, I had to complete a 45-minute online interview and all I remember was just being so nervous. I had no idea what to expect, and due to the time difference, it was very early in the morning.

“I remember my Dad giving me some tips beforehand, telling me to ‘be confident’ and ‘you have made it this far, just show them who you are,’ things like that: he was very encouraging.

“During the interview, I was given two fact patterns [a summary of the key facts of a legal case]: I had 20 minutes to prepare, then was asked a series of questions about them, and then had to debate a couple of issues.

“It was probably the most intimidating interview I had ever done, but I felt quietly confident afterward – though still not wanting to get my hopes up. Then I remember getting accepted in January and I couldn’t believe it! It was well before any other schools had got back to me and I just remember being so happy, shocked, and excited.”

“We bonded over my old room!”

Emma began her Law degree at Wolfson in October 2021, but it still felt a little unreal and a little daunting when she started.

“I was nervous,” she says, “but Dad was really encouraging and it helped knowing he had been through it. I had a bit of imposter syndrome when I arrived too, and he definitely helped, telling me that it was a really common feeling.”

Kieran visited Emma in the last term and got to relive his own Wolfson experience too.

“I feel like I’m 23 years-old again,” he says, sat in Bredon House with Emma, “like I’m a student again. One of Emma’s friends lives in the room I had when I was here, so we bonded over my old room!”

Kieran has a unique vantage point of having seen two entirely different generations study at the College, as well as experiencing Wolfson as a student himself.

“I remember being around the grounds when Dad was here, and I was really enamoured with all the pomp, grandeur, and the robes!” he says. “Mum and Dad would also talk about all the guest nights they went to, and my Dad was a friend of [former Wolfson College President] Sir David Williams.

“There’s much that’s still the same. The sense of cosmopolitanism is consistent across the years. On the community front, it’s got the same excellent qualities it’s always had. It does seem to me that the stakes are a bit higher for students these days though – Emma is working really, really hard.”

While Emma’s grandfather passed away in the summer of 2021, Kieran says that he knew that Emma was following in the family footsteps. “He knew – and he was very proud,” he says.

Emma has loved her first year at Wolfson too: “It has been a lot of tough work, but thankfully I have met some amazing people that have made all the hard work a lot easier. With that being said, I also really enjoy studying Law and it still feels surreal that I am studying law at Cambridge.”

Find out more about studying Law at Cambridge

You don’t need a family connection to study Law at Wolfson – find out more about Law courses and admissions on our website here.