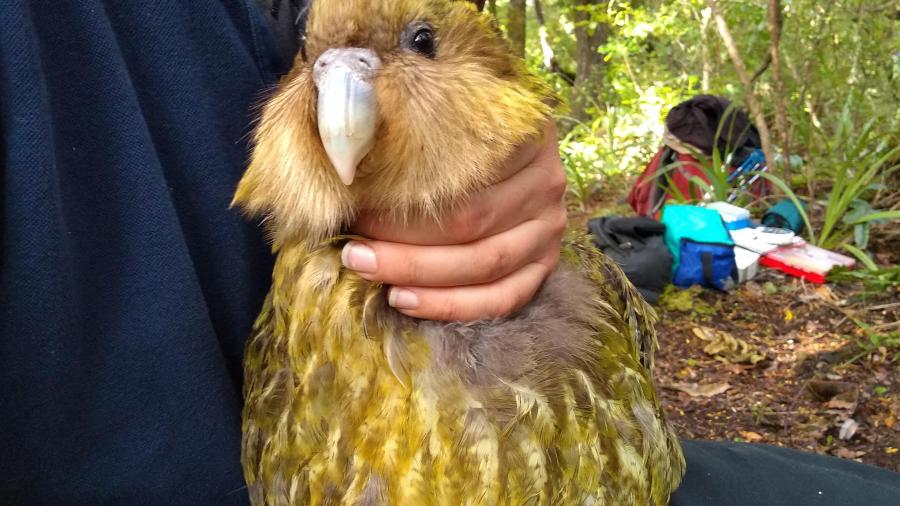 PhD student Lara Urban has been putting her expertise in genomic analysis to work in New Zealand to help save a critically endangered parrot.

When viewed on YouTube videos, the kākāpō is a comically charming creature. Bewhiskered, more than 50cm tall, chunky and clumsy, the world's only flightless parrot was once one of New Zealand’s most common birds. But a combination of habitat loss and predation of both birds and eggs — primarily by introduced rats, ferrets, stoats, feral cats and possums — reduced their populations to near extinction by the end of the 19th century. Despite conservation efforts dating back to 1891, their decline continued well into the 20th century.

Finally in 1995 the Kākāpō Recovery programme was established by the New Zealand Department of Conservation. Currently there are just 144 individual kākāpō, and the programme is making efforts to increase the population through selective breeding. Wolfson PhD student Lara Urban recently spent three months working in Dunedin using her skills in genomic data-crunching to help maximise their chances of successfully rebuilding the population.

By the time the Kākāpō Recovery programme began, the birds were found in only two locations in the southernmost reaches of the South Island: the Fiordland and Steward Island. Efforts were made to find predator-free locations and the birds were eventually relocated to three other islands: Anchor Island, Te Hauturu-o-Toi/Little Barrier Island and Whenua hou/Codfish Island. Then the breeding programme started — but there was a challenge: Small, isolated populations become increasingly inbred, leading to a limited gene pool. With such a tiny handful of individuals, how could they ensure the greatest chance for success?

Lara explains, "Most endangered species are affected by a major loss of genetic diversity. This further increases their vulnerability by leading to lower adaptive potential and resilience to environmental fluctuation. The species' genetic background can provide crucial information to maximize future diversity within the species. I travelled to New Zealand to explore how genomics research can support the recovery of this endearing creature. Specifically, I was interested in detecting links between genetic variation and fitness traits of the kākāpō, and in using this information to help derive an optimal strategy for its conservation."

Lara collaborated with Associate Professor Bruce Robertson at Otago University in Dunedin to examine the genomes of all living kākāpō. The original reference genome for the birds was decoded by Jason Howard and Erich Jarvis at Duke University in North Carolina; subsequently the Kākāpō125+ mapped the genomes of all individual living birds. Using genomic computational techniques, Lara and Professor Robertson started by quantifying the genetic diversity of the current kākāpō population. The information provided by this analysis lets them know how closely related individual birds are to one another, and identifies the presence of highly heterogeneous regions in their genome.

"The goal is to prioritize individuals in a breeding programme in order to increase the total genetic diversity of the population. We can also use genetic data to understand the susceptibility to a cloacitis disease that plagues the kākāpō population. In addition to gaining a better understanding of the disease and possible treatments, this knowledge will inform conservation decisions when it comes to breeding birds for maximum ability to withstand disease."

The effort to help the kākāpō successfully breed is hampered in several ways. Because the birds are very related to each other, this probably leads to the fact that most eggs are not fertile and hatching success is very low. Furthermore, they only breed when the a native conifer called the rimu tree is in fruit.

"The trees have mass fruiting years, which is when the birds mate. Kākāpōs may have from one to three chicks per nest and those chicks get quite large, so the birds rely on the energy provided by the rimu seeds to raise them. But because the birds are long-lived (they can reach 100 years old) the males do not reach reproductive age until around 15 years old. Females can mate when they are younger."

The programme uses artificial insemination to breed specific animals but they do not prevent the birds from also choosing their own mating partners.

"They might have mechanisms to choose mates that are very advantageous in ways that we don't yet understand, somehow identifying qualities that can help increase the fitness of their offspring."

The rangers usually take eggs from the nests to incubate them in optimal conditions that leads to a higher success rate, leaving the females with dummy eggs in the nests. This year they’ve instead blocked off the nests for a number of females once the eggs were removed to encourage them to go and mate again. The assisted breeding programme is having a very successful year, with a total of 189 eggs laid and 37 chicks currently alive.

In an ongoing collaboration, Lara is investigating the associations between genetic variation and phenotypic traits by applying machine learning and statistical methodology. Determining the function of specific genes is done by aligning the gene sequences with those of similar species with annotated genomes.

"Most genes we look at will have to do with development and immune system. This investigation will allow then to explore how specific genes contribute to the kākāpō’s fitness, fertility and disease susceptibility, and how inbreeding affects these traits. The goal is to breed back into the population beneficial gene variants and breed out deleterious ones."

Taking a break from the lab

Lara was able to join Scientific Advisor Dr Andrew Digby and other members of the Kākāpō Recovery Programme in their fieldwork on Whenua Hou. There, she was able to observe the practicalities of conservation work, and assess the applicability of findings from genomics research to conservation in the field. She was involved in various aspects of the management work, and allowed to study the kākāpō during one of its rare breeding seasons. This meant that in addition to the usual kākāpō fieldwork, exciting projects involving artificial insemination, egg incubation and chick hand-rearing were happening every day.

"Whilst both the genomic and fieldwork have been fascinating, it was a highlight for me to meet Gulliver, a male kākāpō with rare and hence invaluable genes from his father, Richard Henry, the last remaining individual from the Fiordland population. I will never forget how it feels to spend the night alone in the relatively untouched nature of Whenua Hou, only a few meters away from a kākāpō nest whilst monitoring a female bird’s wellbeing and listening to the unique deep ‘booming’ call of the male birds in the woods. "

Lara was impressed with conservation efforts in New Zealand.

"In general, it's a great example where conservation and science work together very closely. The Department of Conservation has scientific advisors that collaborate with different universities in New Zealand and try to implement results based on science. They also devote significant resources to this recovery effort. The programme is able to use this entire island, remove all the predators and establish hiking trails so that researchers can get around. All the birds are tagged and monitored, and they take care of each individual chick, rearing them by hand."

Lara will be returning to the the project — and New Zealand — after she finishes her PhD here at Wolfson. She concludes, "This work has not only provided me with invaluable insights into conservation genomics and fieldwork in relation to the kākāpō, but has also allowed me to initiate genomics research on another critically endangered bird in New Zealand, the takahē, that I will carry out during my first postdoctoral placement."

Lara received funding from Wolfson College to travel to Dunedin, and was funded by the Genetic Society for the fieldwork trip on Whenua Hou.