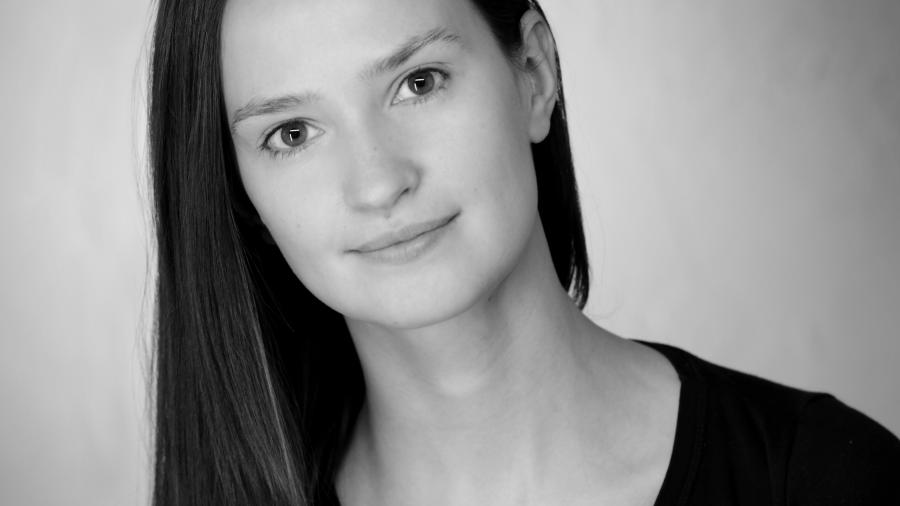 “I was the least intellectual in the family!” says Wolfson Junior Research Fellow, Dr Olga Petri.

“Both my parents are chemical engineers. When I was ten, I didn’t know which field I would study in, but I was sure I would get a PhD like my mum and dad!”

Olga is an urban historical geographer and a Leverhulme Trust Early Career Research Fellow in the Department of Geography. Aside from the obvious influence of an academic family, the main early inspiration for her academic career was the city – St. Petersburg, where, she says, “virtually all of my known ancestors lived and where I was born.”

Olga feels fortunate to have grown up in the centre of the city, and as a fifteen-year-old walking to school along the Moika River near Palace Square, she began to think about how people in the past experienced the same urban spaces.

“I began to wonder about St. Petersburg history. But not about the factual history - this I studied at school, but about how people in the past experienced the city. As a girl, I used to imagine what they might have felt by looking at the dark water of the Moika River or perhaps how these buildings, while they are the same as a hundred years ago, had a very different meaning for these urban residents. What was the feeling of the city?”

These questions, of the relationships and interactions within a place, form the very basis of urban historical geography.

Around the same time that the fifteen-year-old Olga was contemplating these questions in St Petersburg, she discovered a book that would mark a milestone in her thinking about the city: ‘Wings’ by the Russian writer Mikhail Kuzmin.

“It is a book about the city, love, friendship, and inspiration,” says Olga. “His mysterious, yet bright poetry made me curious about his life. When I began to learn about him, I found out that he was queer and part of a vibrant milieu.

“The idea of writing about hidden loves in the city and the queer milieu in particular was long in gestation, but the topic re-emerged as an academic pursuit only recently when I took up my studies in the UK.

“My fascination with the methods of cultural and historical geography could be pursued effectively in my new intellectual home and opened up different ways of looking at St. Petersburg as a city ‘where the sky poured some kind of love,’ according to Kuzmin.”

Places of Tenderness and Heat

Olga’s first monograph, ‘Places of Tenderness and Heat: The Queer Milieu of Fin-de-Siècle St Petersburg’, will be published in 2022 by Cornell University. The book is the first dedicated study of the male homosexual or queer milieu of fin-de-siècle St. Petersburg, specifically in the period 1879 – 1914.

“Moving away from questions about the tsarist regime’s degree of repression or tolerance towards male homosexual sex,” she says, “I look instead at life in and of queer spaces.

“This approach has two main benefits. Firstly, it illuminates an aspect of fin-de-siècle St. Petersburg that has often been obscured by the search for the seeds of revolution: a highly informal, and yet relatively consistent and stable entente between queer men and municipal authorities, including the police.

“Secondly, my focus on patterns of movement and encounter in public and semi-public spaces, regardless of whether they resulted in criminal prosecution or medical treatment for the men who got “caught,” can be rolled out to other cities, whose queer milieus, like St. Petersburg’s, are poorly documented in autobiographical and court records.”

By focusing the investigation on the use of space, the book alters and expands our understanding of government at work in the pre-revolutionary capital and re-casts our historical imagination of queer life in the St. Petersburg as at least navigable, if not hospitable.

As an urban historical geographer, Olga is keenly aware of her own interactions with the urban spaces of St Petersburg. And those interactions between the self and the city bring out different versions of the self.

“When I return to the city, I feel like I’m a different person. The city impacts me in  different ways. For example, my femininity takes a different form in Russia. I wear mascara in St Petersburg!” she says jokingly.

“I think I also become more romantic in St. Petersburg. It’s such a beautiful city – I know that I am biased, but it’s true! – and it does have this impact on people.”

As well as her research on queer spaces in St Petersburg, Olga also dedicates her time to another project – funded by the Leverhulme Trust and the Isaac Newton Trust – entitled ‘Beastly St Petersburg: humans and other animals in Imperial Russia’.

One paper from the project – ‘The song of the Ovsîanka: the enhanced nature of the urban canary in Imperial St. Petersburg (1880 - 1900)’ – is a fascinating example of urban historical geography.

It explores how, from 1880 to 1900, canaries were brought to the city in great numbers from hatcheries located in the Russian countryside. These birds were not only kept domestically, but in public spaces, including arcades and shopping malls. Their song was the ovsîanka, a mix of melodies acquired from wild Russian birds, and it could be heard across the city.

“They were taught to sing the songs of other small birds of the Russian forest. In terms of the soundscape of the city, people tried to replicate the rural environment in the city using this small bird. In a way, we can observe  the process of urban rewilding as an aesthetically motivated invitation of the wild into the inner sanctum of human artifice.”

The canary was thus “a relief from the urban modernity,” a reminder of the rural in the midst of the anxiety of the urban moment.

In 2018, Olga became a Junior Research Fellow at Wolfson College.

“The application process was so straightforward, so smooth,” she says. “The interview was very scary: there was a lot of smart people in the room! But we had such an inspiring conversation – and I felt like they were really interested in what I do. I had a really good feeling, because I enjoyed it, and I had never enjoyed interviews before!

“To be in an environment where you feel at home, where you feel like your difference is your strength, is important to me. At Wolfson, I felt I could celebrate my background, my personality, my interests, more than any other place.”

The value of teaching

Olga teaches at the Department of Geography and in the Slavonic Section at the Faculty of Modern and Medieval Languages, and last year was shortlisted at the annual Student-Led Teaching Awards in 2020, in the Supporting Students (Academic) section.

“I felt so grateful and pleased that students nominated me,” she says. “That was really special. Throughout my education and research career, I have had some extraordinary mentors who profoundly affected the way I think about both geography and teaching generally.

“All of them shared one characteristic: they never imposed a particular method or set narrowly defined objectives, but rather sought to inspire students, encourage their aesthetic appreciation, and guide them through the material while respectfully challenging their critical thinking. I do my best to do the same for my students.”

You can find out more about Dr Petri on her Wolfson profile page.

‘The song of the Ovsîanka: the enhanced nature of the urban canary in Imperial St. Petersburg (1880 - 1900)’ is available on the Brill website.

And you can pre-order Places of Tenderness and Heat on the Cornell University Press website now.