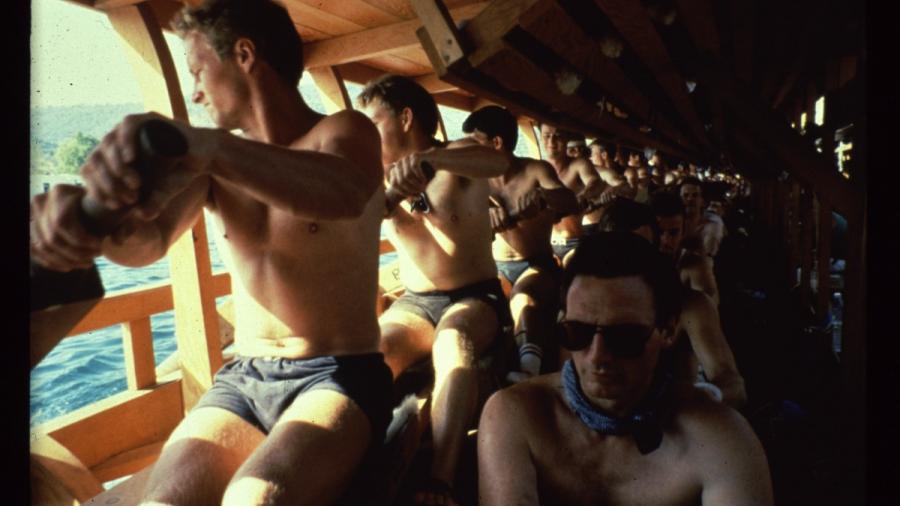 The archive of the Trireme Trust, established by Professor John Morrison, has been transferred into the care of Wolfson College.

Wolfson’s founding President, Professor John Morrison, established the Trireme Trust in 1982 in order to ‘investigate a centuries-old controversy about the nature of the trireme, the most important warship of the ancient Mediterranean world’. Morrison was a professor of Greek, and a former vice-master of Churchill College before he became the first President of Wolfson (then known as University College).

To test his theories about the construction, efficiency and speed of the trireme, Professor Morrison founded the Trireme Trust along with naval architect John Coates and writer Frank Welsh. The Trust proceeded to build a full-scale reconstruction, the Olympias, which was launched by the Hellenic Navy in 1987. A series of trials demonstrated that the ship could be rowed with speed, ‘despite almost universal academic opinion that a three-level arrangement of oars was wholly impracticable’.

The Trust continued to disseminate information about the ship and the trials for the next three decades, giving lectures in schools and to historical societies, providing the media with interviews and images, publishing regular newsletters, and carrying out further research based on the sea-trials. Professor Morrison died in 2000, and the Trust has been chaired by Professor Boris Rankov since 1996.

After 35 years, the Trust is now winding up, and it was decided that the archives — consisting of correspondence, design notes, plans and drawings, and other documentation of the sea-trials—be moved to a permanent home at Wolfson College. In March of this year, members of the Trust Council joined staff and Fellows of Wolfson to celebrate the event in the Old Combination Room at Wolfson College, Cambridge. Also present at the gathering were members of the Morrison and Coates families, as well as Trust Archivist John Quenby, and Wolfson College Archivist Frieda Midgley.

Wolfson College, Cambridge was identified as the most appropriate repository for the Archive because its close association with John Morrison in effect makes it part of the College’s history, and because the College’s skilled staff and modern storage and display facilities will ensure its survival and availability for decades and indeed centuries to come. The Trust is deeply grateful to the College for agreeing to accept the donation, and hopes that the Archive will provide a valuable resource for general enquiries and for future research into ancient ships and experimental archaeology (including ongoing research by former members of the Trust), and as a source of illustrations for related publications. — Professor Boris Rankov, Chair of the Trireme Trust

The existing Trust website will continue to be live for the forseeable future, as it continues to be a valuable resource for researchers and interested members of the public. The Olympias herself is no longer structurally capable of being used for experimental trials but she continues to be maintained by the Hellenic Navy at the Battleship Averof Floating Naval Museum in Faliro, Greece, where she is visited by thousands each year. Wolfson President, Jane Clarke, welcomed the selection of the College for this fascinating archival collection.

We are very pleased that the Trireme Trust have chosen Wolfson College, Cambridge, as the long term home for its archive. I have been particularly interested to see my predecessor John Morrison thinking like a scientist in the way he developed and tested his ideas about the construction of the trireme. It is great that we are already being approached by research and educational projects across the world, seeking to build on the work of John Morrison and his colleagues. — Professor Jane Clarke, President of Wolfson College

“The future of football is more exciting thanks to the Lionesses!” Women’s captain Lucy Green reflects on a changing game