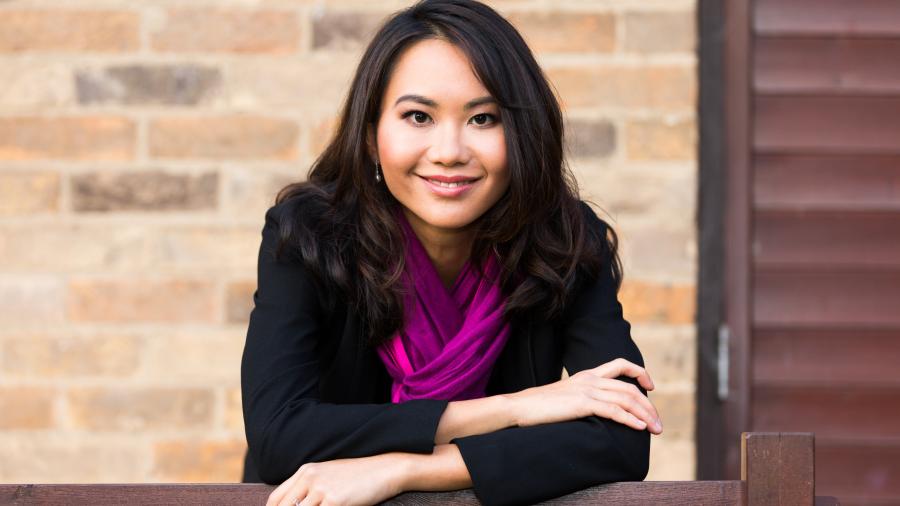 Felicia Yap didn’t write fiction while she was a Junior Research Fellow (JRF) at Wolfson, but she believes the experience of College led her irrevocably along the path to becoming a novelist: “I wouldn’t have written Future Perfect if not for Wolfson,” she says.

Released this week, Future Perfect is Yap’s second novel: a race-against-time thriller in which Police Commissioner Christian Verger has to solve a catwalk murder despite being told by his voice assistant that he will die tomorrow.

Future Perfect is the much-anticipated follow-up to Yap’s first novel, philosophical thriller Yesterday, which was met with rave reviews and led to the Guardian critic Kate Kellaway hailing her as one of the rising stars of the year.

It’s been a remarkable literary ascent for someone whose CV is in fact peppered with remarkable achievements. As well as writing for The Economist and The Business Times, Yap has been, she says, “a radioactive-cell biologist, a war historian, a university lecturer, a technology journalist, a theatre critic, a flea-market trader and a catwalk model".

Ahead of the launch of Future Perfect, we spoke to Yap about her time at Wolfson, her approach to novel writing, and what’s on her cultural radar.

There is a real sense of imminence in your fiction: in your first novel, the protagonist can only remember yesterday; in your second, the protagonist is told he will die tomorrow. Do you write with the same sense of urgency and immediacy or do you have more of a slow and methodical process?

I believe that thrillers should ideally have in-built ticking clocks, so readers will keep turning the pages. This is why both my novels are propelled by a sense of urgency, why the lead investigators in both Future Perfect and Yesterday must solve their cases within a day.

While I write with one eye on the clock, I also keep one foot on the brakes. Suspense can be created by slowing down the story, by making the action super-slow-mo. This can often make readers more desperate to find out what happened, prompt them to speed up their reading.

Both your novels sound like thrilling vehicles for big ideas: ideas around memory and identity, technology and trust, time and the self. Do you start out with these ideas or do they emerge as you develop the story?

I start with big concepts. Concepts which intrigue me, questions which I’m happy to spend two years of my life figuring out the answers to. My debut novel Yesterday grew out of the question ‘How do you solve a murder if you only remember yesterday?’, an idea which hit me on my way to a dance practice in Cambridge.

The concept for Future Perfect came to me on a catwalk. At a show in 2012, a backstage helper handed me an extremely heavy leather bag just before I walked onto the runway. I remember clutching the bag and thinking as I glided down the platform: What if someone put a bomb inside the handbag and we are all going to die? Would I have led my life a little differently yesterday, had I known I would die today? Years later, I sat down and began writing this episode from the perspective of a model named Ally. The scene now forms the first chapter of the book (the bomb unfortunately goes off, killing the girl). Police Commissioner Christian Verger has to solve the case quickly, because his voice assistant Alexa is 99.74% convinced he will die tomorrow.

Additional themes take shape over the course of editing, too. I got to the end of an early draft of Future Perfect only to realise that the book was partly about perfection, or the impossibility of it. And so I went back, re-edited the manuscript.

Concepts are merely empty canvases to hang tales on; what makes books come alive are the small but lively details that populate them. A tiny yet exquisite diamante on a bodice is like a beguiling character quirk in a novel: both make a story not just shine but sparkle.

What are the main themes you're interested in exploring in your work?

Future Perfect explores how computers might soon know us better than we do ourselves. They might be able to predict our futures, how we will live – and perhaps even when we will die. I’ve long been fascinated by predictive technology.

During my time at the Science and Technology section of The Economist, I wrote several articles on how technology can detect buried treasure or predict phenomena like tsunamis or wildfires. I’m intrigued by how artificial intelligence can pinpoint our profiles with increasing accuracy, based on our data trails. It’s possible that computers will soon amass so much data about us (like our health metrics, consumption habits and personal preferences), they will be able to predict our short-term prospects with ease. In Future Perfect, an app called iPredict provides forecasts about what will happen to a person over the next two days – and a large swathe of humanity is, predictably, addicted to the app.

I’m also interested in how computers might be able to predict a person’s likelihood of becoming a murderer. In Future Perfect, a secret service software named CriminalX scans people’s backgrounds and data trails (such as their Google histories) to prevent future homicides and terrorist attacks.

Were you writing much fiction while you were at Wolfson?

Fiction emerged much later. I didn’t manage to write any fiction during my time at Wolfson, unfortunately. I only wrote academic papers and feature stories for newspapers and other general publications. I had always wanted to be a novelist, ever since I was a child. In 2015, I told myself that it was time to get going with my dream. When the concept for Yesterday came to me, I started writing the next day. I’m glad I did.

What can you remember from your experience of the College?

I loved being a Junior Research Fellow at Wolfson. In fact, it was one of the highlights of my time at Cambridge. I particularly cherish the College’s friendly, welcoming and all-inclusive ethos. I made a lot of wonderful friends during my time at Wolfson and still travel to Cambridge once in a while to play board games with them. Some of us even went to France to play ‘Carcassonne’ in Carcassonne. The geeks amongst us are still hoping to play ‘Alhambra’ in Alhambra.

I have two particularly fond memories of my time at Wolfson. The first is of performing the Waltz, Tango and Foxtrot at the Wolfson June Event. I represented Cambridge University in competitive ballroom dancing and have a Half-Blue in Dancesport. My dance partner Blaise Thomson, also a Wolfson alumni, and I were part of the team that won the Varsity Match in 2007. During the May Ball week of that year, we performed at a different ball on almost every night, starting at 4am at Jesus on Monday and finishing with both Wolfson and Darwin on Friday. I was so exhausted, I fell asleep in the Karen Spärck Jones Room just before dawn broke and woke up around midday.

The second happened in the Lee Hall, which my dance partner and I had used regularly for practices. One day, while we were rehearsing, I saw a face plastered to one of the glass windows, a man staring intently at us. After a while, I couldn’t bear it anymore. I went out to ask him why he was watching us with such great interest. He said he loved my dancing, introduced himself as a director of fashion events and asked if I would like to model in his upcoming runway show. I said yes, ended up doing my first catwalk show just a couple of weeks later. I enjoyed modelling so much, I went down a lot more catwalks after that. Highlights included being photographed in Giorgio Armani for Red, Kate Spade for Tatler, Burberry for Esquire and in dozens of other magazines. One thing leads to another; I believe in the magical forces of engineered serendipity. I wouldn’t have written Future Perfect if not for Wolfson.

What were you researching at the time, and have your research interests crept into your novel writing?

My PhD research was on prisoners of the Japanese in East and Southeast Asia during the Second World War. I’m afraid the content of my research wasn’t very useful for a thriller set in the near future (Future Perfect mostly takes place in 2030). However, I did realise from reading lots of war diaries that people often have vastly different memories of the same event. I made good use of this theme in Yesterday, a murder mystery set in a world where most people only remember one day and must rely on diaries to understand their pasts.

Your biography paints a picture of a polymath. Are you firmly planted as a full-time novelist now?

I’m definitely not a polymath, but I do indeed write full-time now. I’m not firmly planted and hope never to be. I’m still planning to run away and join the circus (or the police force). At the very least, to see all the remaining countries on the planet. While I have already visited 143 of them, there are still many more to go.

What's on your cultural radar at the moment?

At the point of answering this, I’m halfway through Daphne Du Maurier’s Jamaica Inn (I can’t believe I haven’t read that book yet). My only concession to music is to flip on the St. Petersburg radio station Eldoradio or the Italian station Radio Monte Carlo when I’m having dinner. I’m also watching At Eternity’s Gate on Netflix. Vincent Van Gogh is one of my favourite painters and I’m currently fascinated by the question of what drives an artist. I’m doing my best in lockdown to catch up on books and movies which I didn’t get round to enjoying earlier.

You can register for the publisher’s book launch on the Eventbrite website. Please note this is not a Wolfson event. 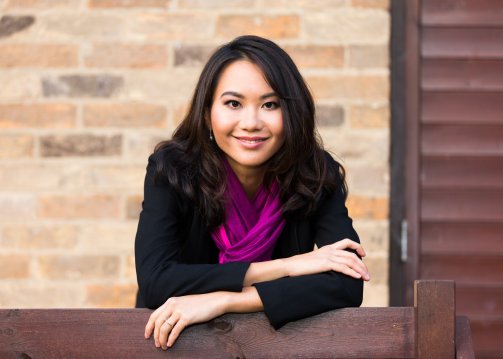 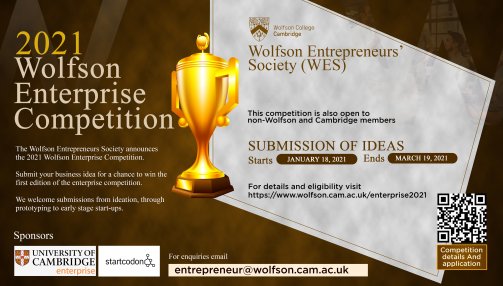 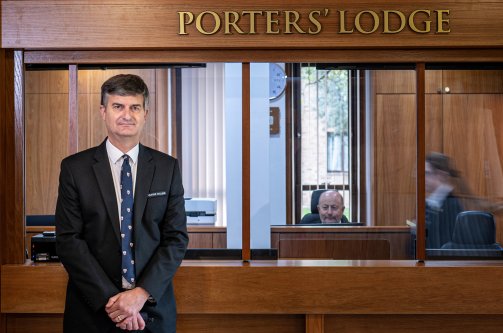 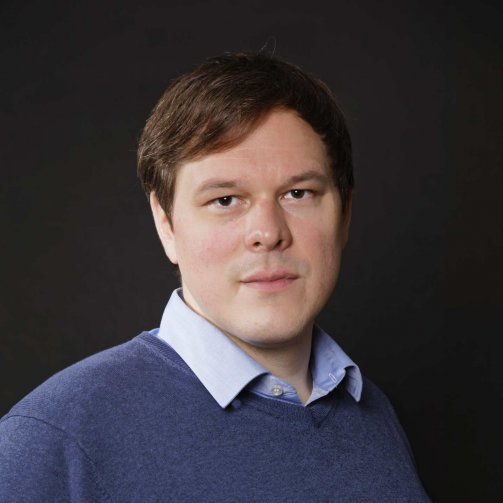