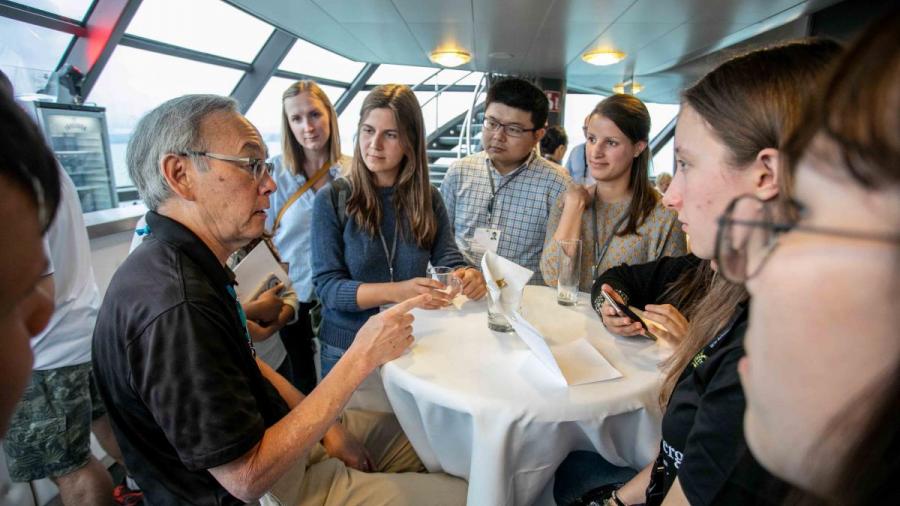 “Unless it is absolutely impossible, check it out.”

Wolfson PhD student Lara Urban attended the prestigious Lindau Nobel Meeting last month. This annual gathering, held since 1951 on the shores of Lake Constance in Bavaria, Germany, is hosted by the Council and the Foundation for the Lindau Nobel Laureate Meetings. Its purpose is to unite early-career scientists — undergraduates, PhD students and post-doc researchers — with their most illustrious predecessors to foster exchanges between scientists of different generations, cultures, and disciplines. Invitations to the Meeting are competitive, decided by a scientific review panel. The applicants’ academic and research achievements, their motivation and dedication, their recommendations as well as extracurricular activities all factor into the decision.

Lara, based at the European Bioinformatics Institute (EMBL-EBI), studies the genomes of cancer patients, using statistics and machine learning. She is also involved with the PuntSeq project, a Cambridge-based initiative to sequence pathogens in the River Cam. Lara also rows with the Wolfson Women’s Boat Club, and is an active member of the Science Society. Here, she shares her experience at the Lindau Meeting:

“Unless it is absolutely impossible, check it out.”

This piece of advice came from Peter Agre (Chemistry, 2003). I heard many such nuggets of wisdom in just a week at the Lindau Meeting. As I listened to dozens of the world’s most successful scientists speaking candidly about their own experiences with unassuming humor and self-awareness, I felt like I was truly part of a community of scientists.

Although there are only 39 Laureates at the Meeting, compared to 600 young scientists, I was surprised just how accessible the older scientists made themselves. In fact, the core purpose of each Lindau Meeting is based on dialogue. Conversations and debates take place in different sessions — lectures, master classes, panel discussions, even boat cruises on Lake Constance— all designed to encourage an exchange of knowledge and experience between and among the Nobel Laureates and young scientists.

Another way in which the Laureates made themselves relatable was their willingness to share aspects of their lives outside of their scientific breakthroughs. I enjoyed chatting to Elizabeth Blackburn (Physiology or Medicine, 2009) about her days studying at Darwin College in Cambridge. During a very entertaining dinner I exchanged jokes with J. Michael Bishop (Physiology or Medicine, 1989) about my experiences with poisonous animals when doing fieldwork.

Neither did the scientists shy away from discussing the greater responsiblities of scientists in the world. I admired how Steven Chu (Physics, 1997) talked about the political responsibilities of scientists in combating climate change, and the vigor with which Randy Schekman (Physiology or Medicine, 2013) and Harold Varmus (Physiology or Medicine, 1989) championed new standards in evaluating scientific achievements during a panel discussion titled Publish or Perish. Another panel, Science in a Post-Factual World, tackled the problems of ‘alternative facts’. (You can watch videos of many of the panels and lectures from the Meeting on the Lindau website).

There was bluntness, too. Ada Yonath (Chemistry, 2009)—one of only two female Laureates at the meeting—responded to a question from a young researcher who asked for advice. “You ask for advice for young scientists? I have an advice, but only one: Don’t look for advice. You have to be curious and to love, and not be afraid of, a challenge. And to have a critical spirit, to know if what you are doing is important, accurate and original.”

By being so open, the Nobel Laureates inspired me, not just because of their achievements, but because they shared that they are ordinary people with convictions. Many of them spoke of the importance of failure, pointing out that the nature of the scientific process means that failure is inevitable and so inescapable. It should not deter us from carrying on with our work and holding on to our convictions, and that itself will have positive impacts on this world, whether or not they are acknowledged with an award.

After a week of listening to the Nobel Laureates reflect on their lives, and meeting like-minded young scientists, many with similar interests and values as myself, I feel reassured that life in scientific research is fun, varied, and exciting. We should face it with nothing less than confidence and curiosity. As Marie Curie puts it, “Nothing in life is to be feared, it is only to be understood”.