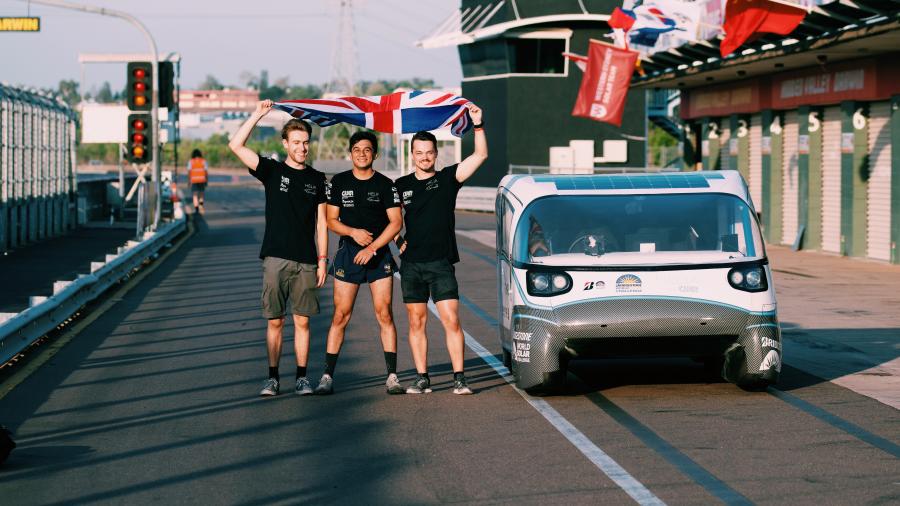 Third-year engineering student Rahul Swaminathan is part of team that built and then raced an electric car 1,864-miles from Darwin to Adelaide as part of the Bridgestone World Solar Challenge.

A team of undergraduate students consulted Formula 1 engineering experts and the world's largest tyre company to design and build a four-seat solar powered electric car called Helia, which can travel from London to the Scottish Highlands at a speed of 50mph — on the same power it takes to boil a kettle.

Cambridge University Eco Racing (CUER) have just taken Helia on an epic 1,864-mile drive from Darwin to Adelaide as part of the Bridgestone World Solar Challenge. As the only British team in its class, they placed third out of 13 in the practicality category, where Helia was marked against criteria including design, versatility and desirability. In the photo at left, Matthieu Wilson (left), Rahul Swaminathan (centre) and Hefer Theron (right) were the three solar car drivers for the event.

Wolfson student Rahul Swaminathan is in his year of a BA in Aerospace and Aerothermal Engineering, with an interest in motor control and power electronics applications, specifically in electric vehicles. He explains his role in the team,

"I was involved in the electrical side of things: mainly dealing with the battery management system, driver controls and the vehicle's drivetrain. I was also one of the three drivers during the event. This year I'm taking over as head of the electrical team, where we are focusing on improving the car's electronics to make them more robust and efficient." 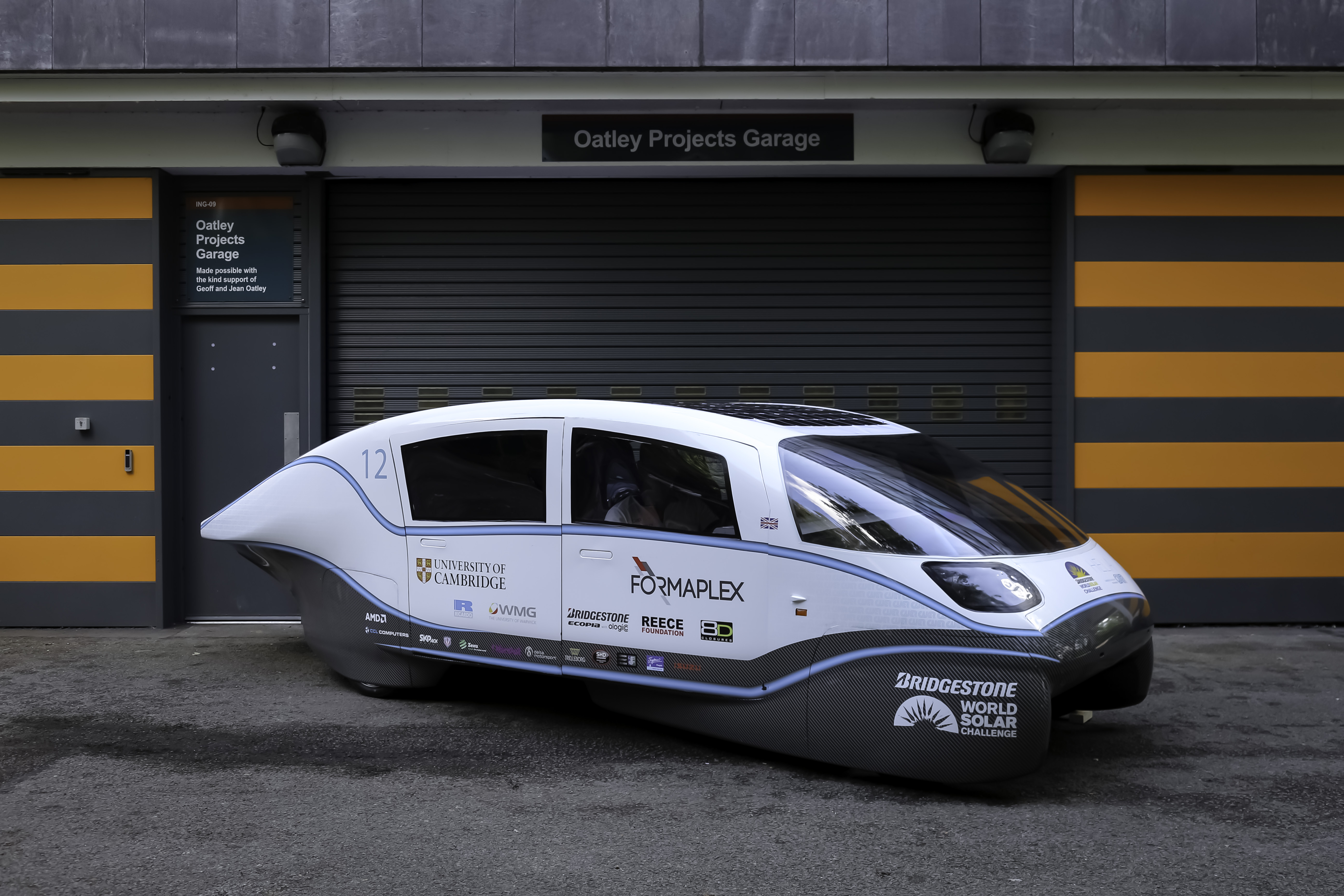 Helia's streamlined aerodynamic design and lightweight construction significantly enhance the overall energy efficiency. The vehicle weighs only 550kg thanks to a highly durable but ultra-light carbon fibre chassis tooled by Portsmouth based Formaplex, a leading lightweight manufacturer for some of the world's biggest Formula 1 teams and automotive companies. (A typical electric car weights from 2050-3070 kg). Use of composites allowed the team to drastically reduce weight while maintaining structural integrity, allowing Helia to travel further and faster than would be possible with other materials.

Power for Helia comes from high performance lithium-ion battery packs produced in collaboration with Silverstone-based Danecca. The battery pack has much higher energy density than most production vehicles, which gives Helia more than double the range of a Tesla Model 3, while being a quarter of the size. Bridgestone, the world's largest tyre and rubber company, also worked with the team to develop low rolling-resistance tyres.

Xiaofan Zhang, CUER's Programme Director said, "Helia was designed to demonstrate the technology behind electric vehicles and renewable energy and will visit schools next summer with the aim of inspiring the next generation of engineers. We have plenty of positives to take forward and are already in search of our next challenge." 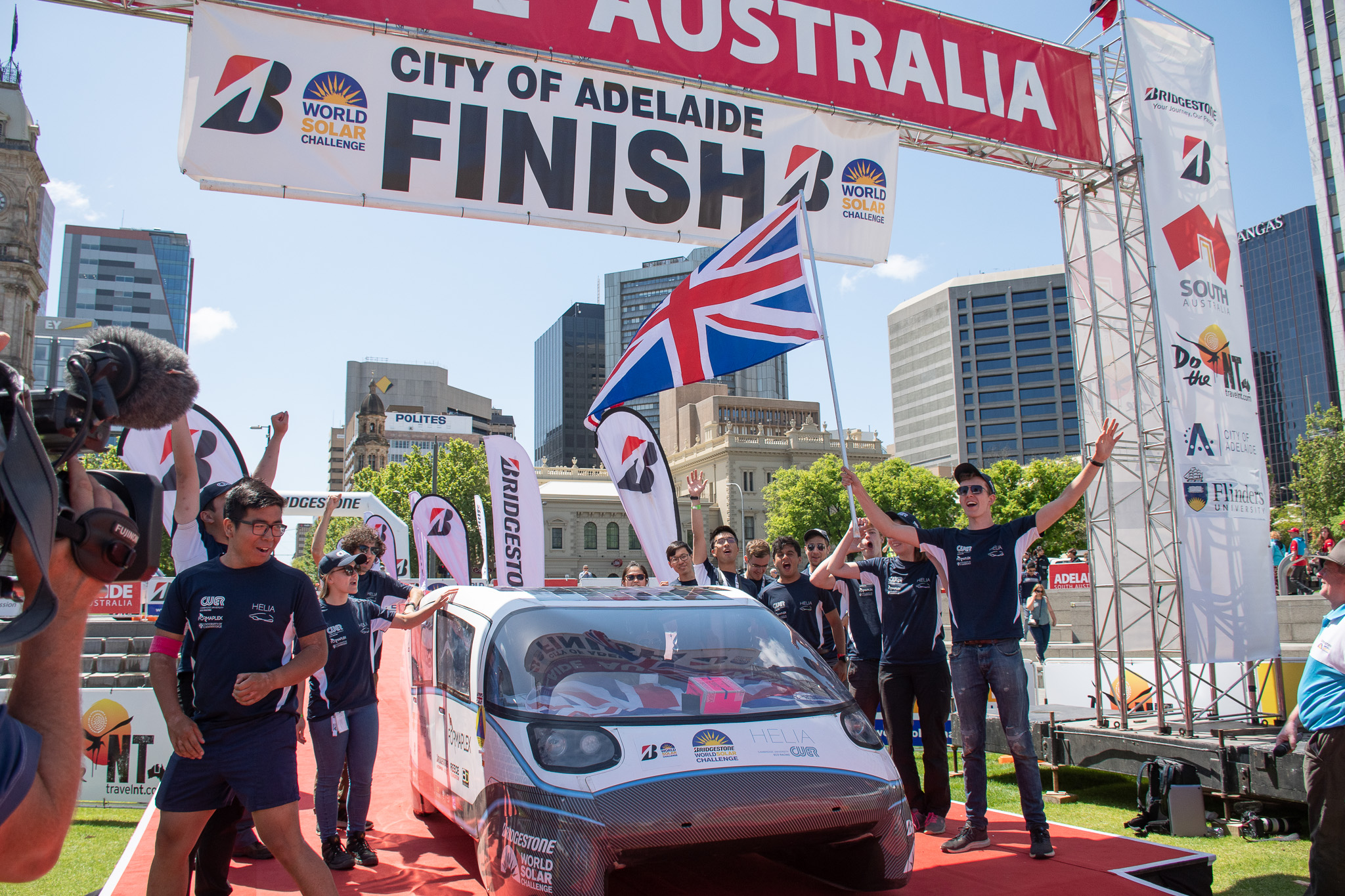 Matt Sellens, Sales Director at Formaplex, said: "We knew the team's biggest focus had to be reducing the weight of their vehicle in order to increase its overall range. Using our experience developed over almost 20 years of working with cutting edge motorsport teams and supercar manufacturers, our engineers designed, machined and sealed the moulds for the chassis and body panels, then worked with the student team to laminate layers of carbon fibre in the moulds. The assemblies were then autoclave cured. The resulting product is fantastic and a real showcase of our lightweighting capabilities in manufacturing and tooling."

Rahul says he worked closely with Alex Ruben (below, with a battery pack he designed), the previous head of the electrical team, who "really mentored me through this project". For the next steps, the team aims to improve the performance and efficiency of the vehicle even further and take the car to Circuit Zolder to compete in the European Solar Challenge 2020. In addition to this, they plan to bring the car around the country this summer for engineering outreach activities. 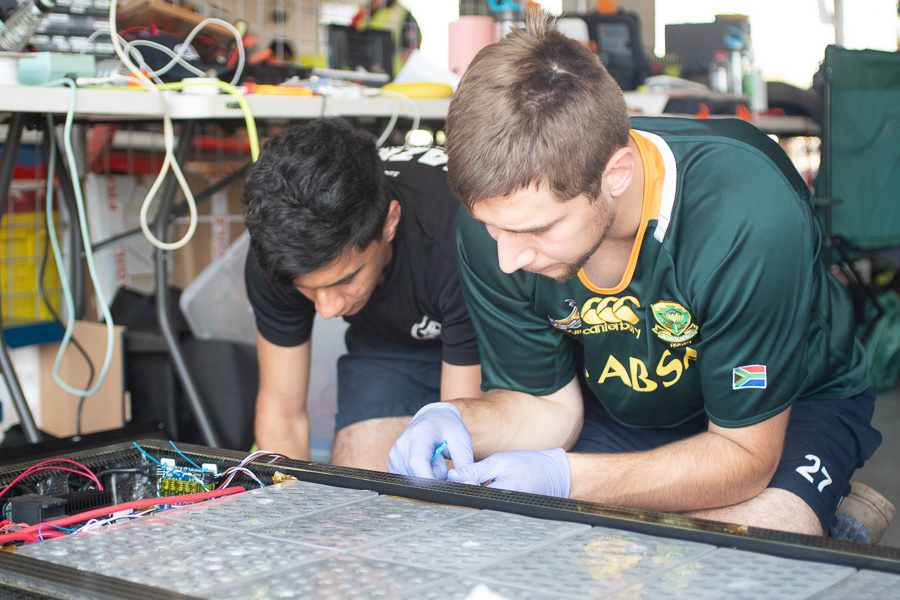