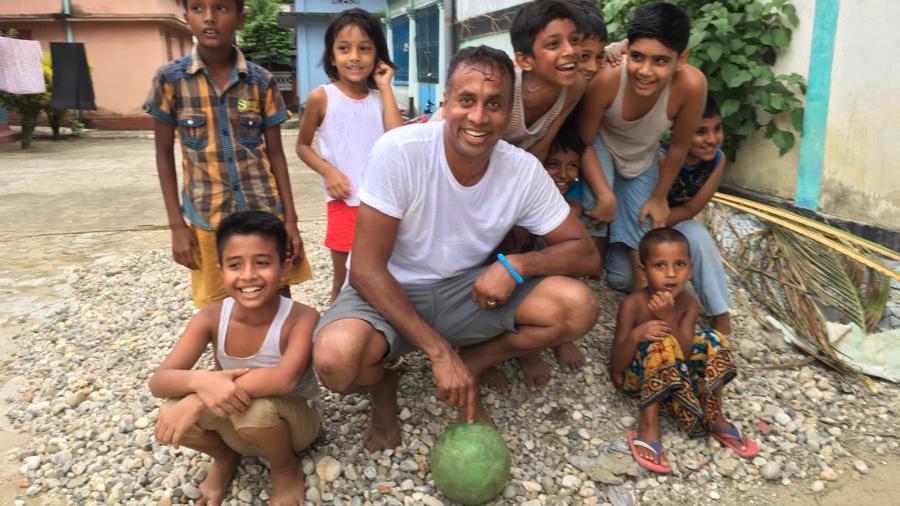 In the latest Wolfson Humanities Society event (Tuesday 9th Feb, 6-7pm), Dr Aminul Hoque MBE will discuss his BBC4 documentary, ‘A Very British History: British Bangladeshis’ - a film that has empowered British Bangladeshis and other ethnic minority groups to share their own stories of family history, experience and identity.

Born in Bangladesh in 1977, Aminul moved to England with his parents when he was only three-years-old. ‘A Very British History: British Bangladeshis’ vividly relates his personal experience growing up in east London, but it also unearths the “hidden histories” of the thousands of Bangladeshi families who settled in the UK from the 1960s. Their arrival brought new foods, traditions, and workers for British industry, but the families themselves faced hardships and racism while building a new life in Britain.

“It’s a personal story, of my own struggles with a sense of identity as British Bangladeshi,” says Dr Hoque, “but it’s also the story of many people: an insider lens on a much wider issue, of not belonging, of feeling excluded, of not having a sense of home. In Bangladesh, British Bangladeshis are viewed as tourists, not as fellow Bangladeshi, but in England we’re constructed as not being ‘British enough’ because of our ethnic and religious background.”

Uncovering those histories and connecting with your origins is, he says, a vital step in stabilising that sense of identity: “If you don’t know who you are and where you’ve come from, you’re lost. It doesn’t mean you disown or abandon where you’re settled, it’s this idea that we can have this multiple sense of belonging.”

As he began to unpack this very unique British history through his own experience, Dr Hoque spoke to his father and found out for the first time about his experience of racism and hardship upon arriving in east London in the 1960s.

“It was emotional, in all honesty: my father is very typical of that generation of men who came here from the 60s onwards, arriving into a new country, journeying five thousand miles from a disconnected rural community into an urban metropolis like London. They left everything behind them, they couldn’t speak a word of English, they found their sense of community here with other fellow migrant communities, and they worked incredibly hard. Their idea was to work hard, send money back home, and eventually return back. As we know, that return never materialised. They made their homes here, yet they endured so much hardship, racism, violence and exclusion. And these stories aren’t often told.”

Encouraging his father to talk about these experiences was not only an emotional personal experience, it also proved to be inspirational to British Bangladeshis and other ethnic minority groups watching the documentary at home.

“It started so many intergenerational household conversations. I had strangers stopping me in the street, emailing me, and sending me tweets. Some would tell me that I’d inspired them to talk to their own father about these things, “because my dad never speaks, and when we saw your dad speak, we went to get our own photo album, we sat down, and we started talking. And it’s incredible how your story is similar to our story and I want to thank you for that. And my father started crying and I’ve never seen him cry.” It was these human stories after the documentary aired that really touched me. And these weren’t thirty second encounters, they were fifty-minute conversations!”

The next generation – and normalising migrant communities

‘A Very British History: British Bangladeshis’ also sees Dr Hoque return to Bangladesh with his own family, taking his three young children for their first visit to their grandparents' village to explore their roots in the region of Sylhet.

“The fact that my children - my British-born children - could visit the country of their ancestry, which they had never been to before, and actually touch, feel, see and experience the extreme poverty over there, the extreme destitution that children their age experience on the streets, it was a real sliding doors moment for them.

As a father of three Muslim, British-Bangladeshi girls, Dr Hoque admits to feeling a little concerned that his children are growing up in a world where nationalism and populism are gaining ground in many corners of the world. That’s why, he says, it is so important to normalise and humanise migrant communities like British Bangladeshis with documentaries like this: “We’re normal! We’re just like everyone else: we watch Netflix, we play football, we have mortgage worries, we have marital problems, we’ve got financial problems, we drink Costa coffee. This documentary was a way of illustrating to the wider public that actually Bangladeshis have a very rich and illustrious history in this country, and have contributed immensely to the cultural, social and economic history of this country.”

The story is powerfully told, and you can hear Dr Hoque discuss the themes and impacts of the documentary online on Tuesday 9th February, 6-7pm. The event is open to all and you can register on the event page in What’s On.