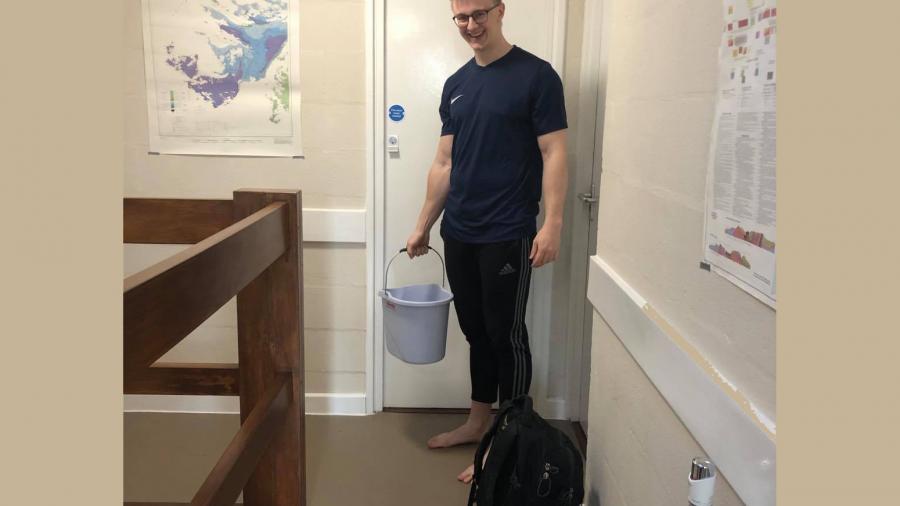 On Sunday 22 March, five people entered self-isolation in X Block in Wolfson. For various reasons we had been unable to leave Cambridge but we hadn't expected to need to isolate so quickly (one of us had been exposed to someone who was self-isolating because they were symptomatic). The first few hours and that evening all felt normal. We often cooked at different times during term, and as busy Cambridge students at varying stages of our degrees, the forced isolation did not feel that different.

However, as the week went on the seclusion set in. We received numerous baked goods from outsiders, which was a welcome break to my daily porridge oats. We found ourselves getting more and more creative with our cooking. My personal highlight was a combination of leftovers donated by friends who had left Wolfson, namely couscous, tarka dal and bacon rashers. Definitely one for the cookbook.

We all made creative inventions in order to stay fit and healthy. I filled a backpack with the heavy law books a friend left behind to make an improvised weight, and a bucket became a dumbbell (see photo). One thousand sit-ups later I really missed the rowing training that had become an element of my daily routine for the past three years.

The delivery of groceries to the block also quickly became complicated. Well aware of the necessary distance we needed to maintain, and that people would not be allowed to touch the door handle of our block, we took precautions. But this all came crashing down on the Tuesday. I had run out of bread, and one of my friends left a loaf on the doorstep. However, as I peeked out the door I saw that the loaf had made its way to the middle of West Court. Flabbergasted, I walked out to retrieve the bread, only to see a crow take off with half of the loaf in its beak. As I gathered up the sad remains of that precious bread, the crow returned to the court and proceeded to stare me down through the kitchen window. The crow is still here to this day, and still trying to intimidate me.

It felt vaguely like a hostage situation (with the crow in control) but we were also conscious of the wider world outside the walls of X Block. From a Wolfson perspective, I am confident in the power of our community, whether resident at Wolfson or forced to return home. This is not how I imagined my undergraduate degree at Cambridge coming to an end, and as much as it breaks my heart not to experience the final term I have worked towards for so long, it has allowed me to reflect on my time at Wolfson.

Staring at the same wall for a week I understand that what makes Wolfson my home is not the residential buildings, nor that one corner of the Club Room where I sat so many afternoons and it is not even seeing the sunrise at the Boat House. Rather Wolfson is, and will be, a home because of the people, the experiences and the community — however much that feels currently threatened. I cannot wait to come back to graduate when stability returns to Cambridge. It will be so much more special now because of what we will have overcome, distant from each other, but ultimately in unison. Stay safe, and find faith in the memories you have from Wolfson. Those will not disappear."

College note: X Block is now out of household isolation and no members of the household became ill.