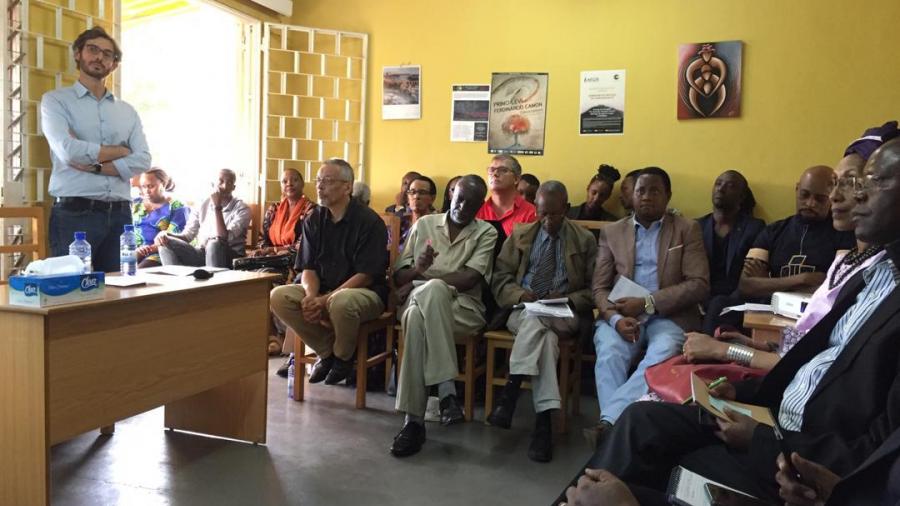 Leverhulme Early Career Fellow and Wolfson JRF Dr Benjamin Chemouni is currently in Rwanda conducting fieldwork for his research. He and his colleague Assumpta Mugiraneza, Director of the IRIBA Centre for Multimedia Heritage, recently held a seminar on their current work on the songs of the liberation struggle in Rwanda.

Benjamin's research aims to identify the ideology of the Rwandan Patriotic Front (RPF), the rebel movement that stopped the 1994 genocide in Rwanda before becoming the ruling party, which it remain to this day. Part of a broader research project funded by the Leverhulme Trust exploring the link between rebellions' organisational culture and post-conflict governance, this research observe rebels’ ideas using their songs of political mobilisation before they took power. He aims to delineate their original ideology, assess whether it has changed over time, and how it can help to explain public policies today. The analysis centres on four main themes: Rwandan national unity, the RPF’s depiction of itself, its depiction of its enemy, and its relationship with the international community – and traces their influence on the Rwandan Patriotic Font’s interests in the post-genocide era.

The seminar, supported by the Aegis Trust, was organised at the IRIBA Centre for Multimedia Heritage in Kigali. The Centre, headed by Assumpta Mugiraneza, gathers audio-visual archives about the history of Rwanda in order to make them accessible to every Rwandan and so that they can be used for educational purposes across the country.

Benjamin said of the event, “It was an emotional seminar. Presenting work on rebel songs and ideology to the former rebels themselves is a risky exercise. Did we get the ideas right? Did we do justice to people’s hopes and aspirations back then, in the extraordinary period of the civil war? Was the translation of the songs correct? But the seminar went wonderfully well, with the public at times bursting into song echoing of what was being presented on the screen! The day was concluded by songs and dance performance, and nice Rwandan coffee, fruits, and beer!”

The paper based on this work was published in the peer-reviewed journal African Affairs.