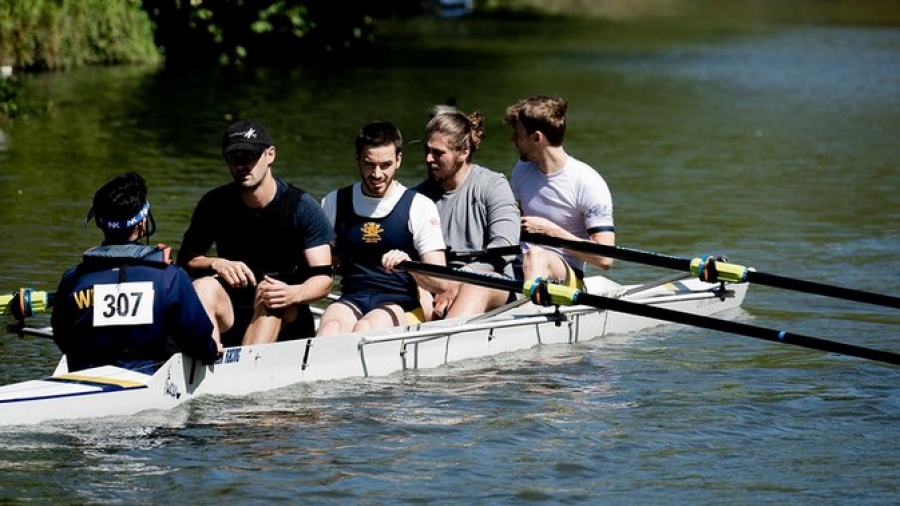 The 2022 May Bumps rowing races take place from Wed 15 June to Sat 18 June, with three boats participating from Wolfson College.

After a difficult showing in the Lent Bumps in March, the Wolfson teams are determined to come back fighting for this year’s May Bumps. Both the men’s and women’s first teams are buoyed by their recent win of the John Dent Trophy for the fastest combined time in the X-Press Head (17m09s), a race which takes place on the same “bumps” route.

However, the May Bumps have the additional challenge of blues athletes joining the College boats. Usually, blues are trialling for the boat race against Oxford over the Lent Bumps, so don’t participate. Despite not having any blues in their boats this year, the Wolfson teams are confident they can put out a strong showing on the Cam.

“Our whole season is spent preparing for the bumps, both in Lent and Easter,” says women’s co-captain Nancy Karreman. “We train six times per week, with a dedicated coach and even more dedicated crewmates.”

“Early mornings and early evenings alike, we get out on the river and put in the work to make our team better. The other half of preparing is mental; we have to get good at rowing for ourselves and not letting other teams' performance get into our heads. We're very proud of where we've gotten to!”

Alex Lau will be photographing the event, after an injury prevented him from joining the men’s first team again this term. He says that M1 are focusing on internal goals to row their personal best every day, in terms of technique and execution.

“It will be difficult to row through and then bump again, but we’re determined to end the bumps in Division 1,” Alex says.

What are the “Bumps”?

At the start of the bumping races, crews line up, in their finishing order of the previous year, along the river with one and a half boat lengths of clear water between them. On the start signal (the firing of a cannon), they chase each other up the river.

When a bump occurs (when one crew is touched by its chasing crew), they pull over to allow the other crews to continue racing. The next day, all crews involved in a bump swap places and the race is run again. After the days of racing, the aim of the top crews is to be at the "head of the river," i.e. to lead the first division. Lower crews cannot expect to achieve this, but can win their "blades" by bumping up every day.

Additionally, the top boat of each lower division (apart from the first division) races at the bottom of the next division (the "sandwich boat") and so a continuous chart can be drawn mapping the progress of all crews.

The Wolfson men’s first boat leads Division 2 (17.30), after narrowly dropping out of Division 1 in 2019. If they can finish without being bumped in their first race, they will earn the role of “sandwich boat” in the Division 1 race (19.00), earning an opportunity for promotion.

The women’s first boat sits in the middle of the pack in Division 2 (18.15), behind ninth place crew Lucy Cavendish.

There are four consecutive days of racing from Wed 15 June to Sat 18 June, at the times detailed above. If the men's first boat successfully rows through into Division 1, they will race again at 19:00.

Belonging to a mature college with a large number of international students, the boat club reflects the diverse composition of Wolfson's student community.

“Rowing at Wolfson is an incredibly fun and rewarding experience. Just like our College, our team is really diverse in many ways, with rowers from many different places, communities, and backgrounds all together in the same boat,” says Nancy.

“A lot of our rowers have never rowed before they come to Cambridge (including me!) but grow to love the sport and the community that comes with it.”

You can find directions to watch the May Bumps on the CUCBC website.

You can also follow the results live on Cam FM.