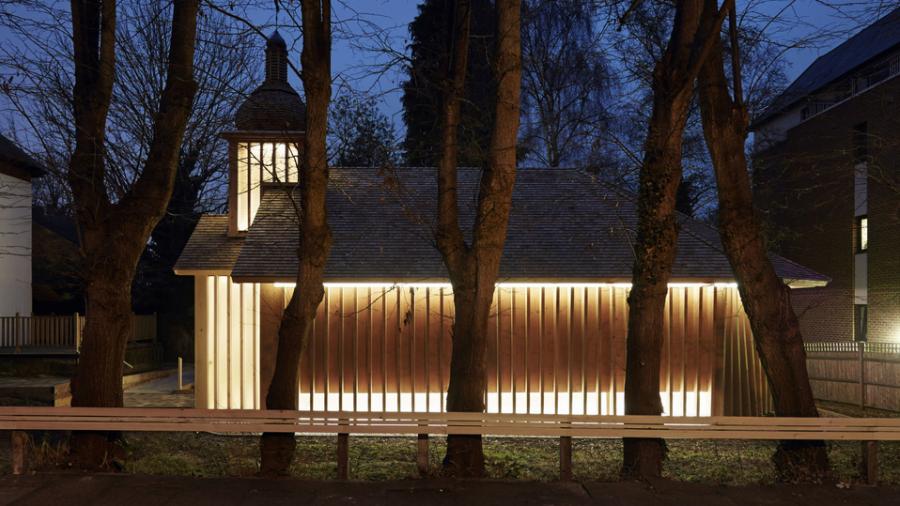 Tszwai So, who recently completed an MSt in Building History at Wolfson College, has designed an award-winning Belarusian Memorial Chapel for London.

The chapel won the People’s Choice category in the New London Architecture Awards (supported by the Mayor of London) and is included in an exhibition of the short-listed projects at The Building Centre, 26 Store Street, London, WC1E 7BT until 4 October 2017. The exhibition features the best new and proposed projects in London spanning from small community-led schemes, to big infrastructure, masterplans and housing projects that actively contribute to improve London as a place to live, work and enjoy. The projects have been selected by an international jury, advised by London-based experts as part of the New London Awards 2017, identifying projects for their quality of design, innovation and longevity, and wider contribution to placemaking in the city.

The chapel also won the RIBA London Award 2017, which is run by the Royal Institute of British Architects.

A co-founder and director of London-based Spheron Architects, Tszwai So is also a trustee of Heritage Trust Network. He qualified as an architect in the UK, having graduated from the University of Hong Kong, where he was awarded the Ho Fook Prize in Architecture in 2003. He is passionate about heritage assets which hold our collective memories, and sees their re-utilisation as a sustainable way of developing our towns and cities, he therefore decided to study for an MSt in Building History at Wolfson, Cambridge.

Tszwai was the recipient of the RIBA Journal Rising Star Award 2016, and AIA UK Young Architect Award 2017. His built projects have been published worldwide and have received 12 major architectural awards, commendations or nominations.

The chapel is the first wooden church to be built in London since the Great Fire of 1666. It was commissioned by the Holy See of Rome for the Belarusian Diaspora Community in London to commemorate the 30th anniversary of the 1986 Chernobyl nuclear disaster.

In Belarus alone, almost 25% of its territory and 20% of its population suffered in the aftermath of the disaster, as 70% of the radioactive fallout fell on Southern Belarus. Designed to serve as a reminder of the traumatic loss of a great number of rural settlements in Belarus and Ukraine, it draws inspiration from the rural wooden churches in Belarus, and aims to combine their traditional architectural language with contemporary building technologies and concepts. The materials palette was restricted to wood and glass to reflect the austere and tranquil beauty of traditional wooden churches. Andrew Trotman is the builder and engineer for the project; a full list of collaborators can be found here.