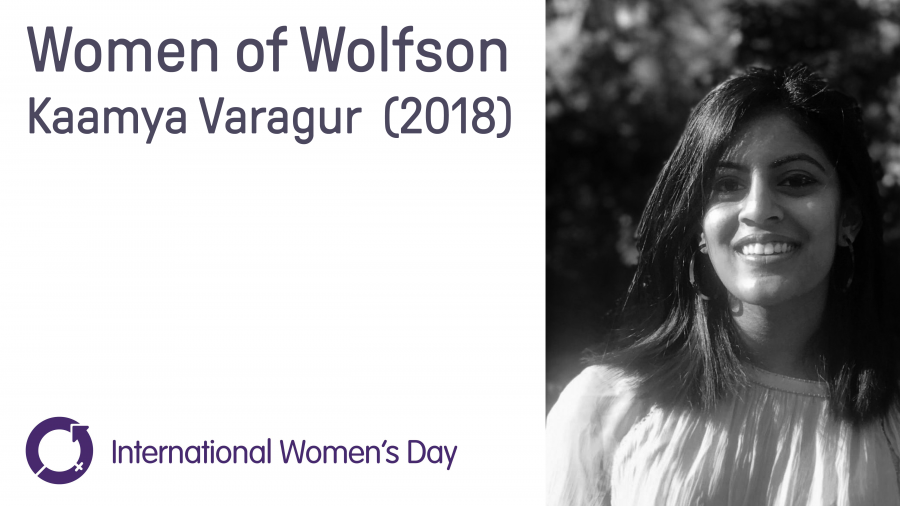 Wolfson MPhil graduate Kaamya Varagur has won the 2020 Young Women in Science Award given by the American Medical Women’s Association (AMWA). The 1st place prize is awarded to the best original research work at the AMWA national conference, at which hundreds of medical students across the United States apply to present every year.  Varagur received the award for her MPhil dissertation ‘Modulatory Effects of Lullaby Singing on Maternal Stress and Mother-Infant Communication’, advised by Wolfson Fellow Professor Ian Cross at the Centre for Music and Science. Here Varagur briefly discusses her work.

"My study recorded mothers in the greater Cambridge area speaking with, rocking, and singing to their 2-8 month old infants, while recording both audio of their “conversations” and songs, and recording the mothers’ heart rates. I wanted to know, in real-time, whether short bouts of infant-directed singing (3 minute blocks) could have any modulatory effects on physiological markers of maternal stress, such as heart rate. I found that singing to infants was associated with greater increases in maternal heart rate variability from baseline than simply rocking the infants. This effect may be clinically significant because increases in heart rate variability are associated with better cardiovascular outcomes. I also examined whether conversational features, such as length of pauses, or ratio of mother:infant vocalisations, were significantly different in the post-singing period than at baseline. While in my small sample such an effect was not apparent, further work with a larger sample size may reveal an impact of infant-directed singing on conversational features over time.

My inquiry was motivated by my past work with the Lullaby Project at Carnegie Hall, which pairs mothers in under-resourced areas with teaching artists in order to write personalised lullabies for their babies. This program is meant to be a creative, low-cost intervention to improve maternal mental health in the postpartum period, for mothers in very high-stress settings such as prisons and homeless shelters, whose environments compound the stressors of the already anxiety-provoking period of becoming a new parent. Programs like the Lullaby Project rely on grant support to continue running, and I spent a summer conducting literature reviews to support their grant applications. In combing through the literature, I realized that the research in this area disproportionately focuses on the benefits of infant-directed singing for infants, rather than any benefits such singing may hold for caregivers. Few studies examined benefits for caregivers, and in reading these studies specifically, I was inspired by the work of Rosie Perkins at the Royal College of Music, on benefits of musical programming in combatting maternal anxiety and depression. This planted the first seed in my mind that perhaps a lot of the research I wanted to get involved with was taking place in England and I might want to study there.

At the same time that I was exploring this literature, I was conducting my undergraduate thesis on music perception in primates, in the department of neuroscience at Princeton, and I came across the work of Ian Cross on theories on the evolution of music—another instance (actually, several instances because of the prolific nature of Professor Cross’s work) of all the research I was most interested in being conducted in England. After speaking with a previous graduate of both Princeton and the CMS about research at Cambridge, I knew I wanted to work with Professor Cross for my MPhil, and I applied to study at the CMS through the Gates Cambridge Scholarship Programme. I am so grateful for the opportunities afforded to me by the Gates Scholarship, the CMS, and Professor Cross, for the chance to conduct a study of my own examining, for the first time, the real-time effects of infant-directed singing on caregiver stress. This was a unique year of my life where I was given the chance to study within the faculty of music, rather than within a science faculty. Learning about theories and ideas within musicology for the first time, and learning about how music is defined differently across cultures, while conducting my research, had a profound effect on how I think about music and music-making."

As a singer and scientist, Kaamya holds an undergraduate degree in Neuroscience, summa cum laude, from Princeton University, an MPhil in Music from Cambridge, and is now finishing her first year of medical school at Washington University School of Medicine in St. Louis, where she is a Distinguished Student Scholar. Her research interests remain centered around developmental neuroscience, maternal health, and fetal health, and she hopes to practice as a pediatric neurosurgeon or fetal surgeon. She continues to support her interest in the interdisciplinary study of music and science by presenting her work at conferences like the AMWA national conference, and by singing as the youngest member of the St. Louis Symphony Chorus.