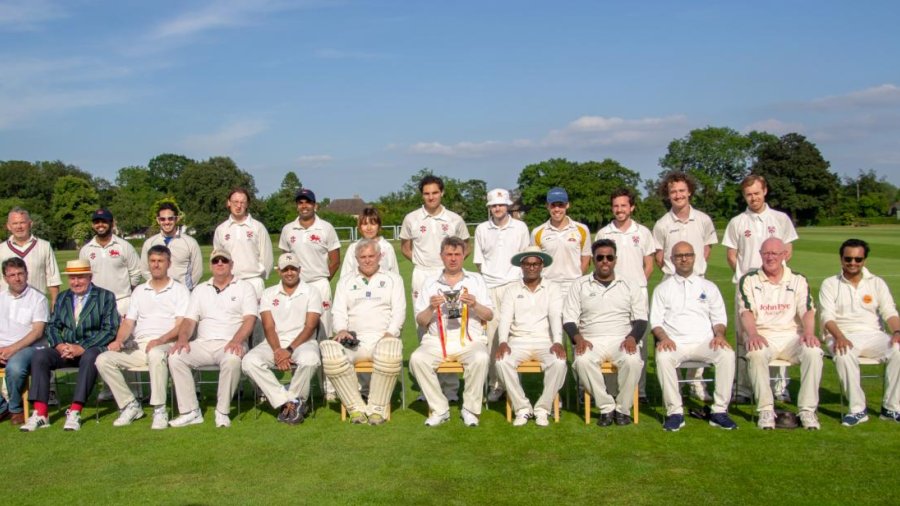 The annual President’s XI vs students match has been hotly contested since xxxx.

With their cricket whites gleaming in the summer sun, the President's team got off to a very shaky start, losing their first three wickets in the first four balls, Kaustav Dutta just missing out on a hat-trick. But they recovered from 0 for 3 to post a total of 115 for 8 in their 20 overs, despite the Students’ team bringing back their excellent opening bowlers, Dutta and Isuru Devendra, for the final four overs. Top scorers for the President’s XI were alumni Akilesh Eswaran (41 runs not out) and last year’s Man-of-the-Match Zab Moghul (32 runs).

In reply, the Students’ team mixed up their batting order to allow the President’s XI three quick wickets, at which point it was clear that there was a game on. Having excelled with the ball, Dhutta and Devendra then threatened to repeat their success with the bat, but a combination of slow scoring and luck allowed the President’s team to dismiss both before they could take control of the fight-back. Wickets then tumbled, and the Students fell 41 short with a total of just 74.

The winning side was manned by an assortment of Staff, Alumni and Fellows, while the students were represented by several regular cricket players as well as complete novices, including a quite brave PhD student, Hui Ben, who was unsportingly dismissed by the Bursar when he brought himself on for a ‘Captain’s over’. The wickets were shared by six of the eight bowlers on the President’s side, with Eswaran taking three. The umpires were Dr Kevin Greenbank and Mr Colin Greenhalgh, with excellent score-keeping by the President’s grandchildren. The Man-of-the-Match Award went to Akilesh Eswaran for his 41 not out and 3 for 9 off two overs.

Isuru Devandra, Law student and captain of the student team, remarked, "Congratulations to the President’s XI, who fought back well after an excellent start to the match by the Students. Despite many notable contributions, the day’s standout performer was undoubtedly the scones at the President’s afterparty."

Wolfson students Karthik Suresh and Angus Mathieson, both of whom play on the University cricket team, were unfortunately unable to play for the Student side. Some have raised suspicions that the timing of the match (during exam season and when the star players are absent) is a little unfortunate, but we couldn't possibly comment.

Karthik and Angus are hoping to play at the one-day Varsity at Lord’s (on 22 June) and the 4-day Varsity match starting on the 2 July at Oxford this year, where they could earn their Blues.

More photos of the event can be found on our Flickr page.