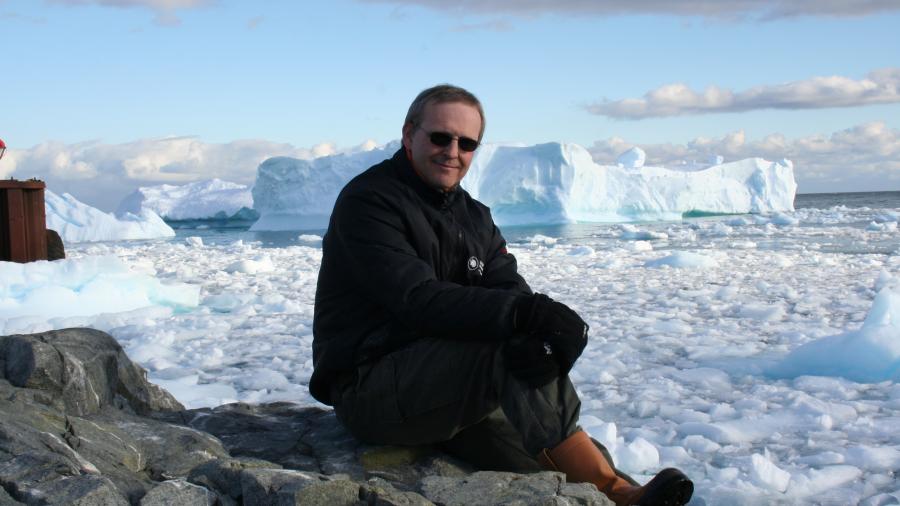 The Antarctic Peninsula is experiencing some of the most rapid warming on the planet. According to Professor Lloyd Peck, while research is revealing more and more about the ‘temperature tolerances’ of species in the region, we still don’t know what the impact will be on the ecosystem as a whole.

Professor Peck, Science Leader of the Biodiversity, Evolution and Adaptation Team at the British Antarctic Survey, and a Fellow of Wolfson College, says there are big question marks about the ‘temperature tolerances’ and survival outlook of many species on the Antarctic Peninsula: “We know some species are very sensitive to change, and it is likely some species will be lost or decline dramatically in numbers,” he says. “What we do not know is if any of these will be key or crucial parts of the foodweb or ecosystem, such as krill, and hence have large effects across the ecosystem with impacts on iconic top predators like whales, seals, penguins and albatrosses.”

Professor Peck will be speaking later at Wolfson’s Science Society talk. In ‘Adaptations of Antarctic Marine Animals and Changing Environments’, he will focus on the adaptations of the unique fauna living on the seabed around Antarctica, and how these adaptations affect abilities to respond to environmental change.

Ahead of the talk, we spoke to Professor Peck about the impact of climate change in the Antarctic Peninsula, his pessimism about hitting climate targets, and how the pandemic has hampered research.

Why is the Antarctic Peninsula such a good place to examine climate change and investigate how species respond to warming temperatures?

The Antarctic Peninsula has seen some of the fastest change on Earth with air temperatures rising 3°C and sea temperatures 2°C in the last half of the 20th century. Nearly 90% of coastal glaciers receded significantly, sea-ice cover has altered dramatically. All of these factors have affected the biodiversity that is there, and research has shown that the animals there have poor abilities to cope with warming compared to temperate species.

There is also the problem that the Antarctic is the most isolated continent of Earth, being the only continent with no continental shelf link to another, and also because the Southern Ocean circulation is circumpolar which means there are no currents coming to Antarctica from lower latitudes. This has resulted in the endemic biodiversity being more unique than anywhere, with more species that do not live anywhere else. The Antarctic Peninsula has an order of magnitude, more visitors and ship traffic than any other Antarctic region, and so there is great concern that alien species will establish there soon.

What level of understanding do we have of the temperature tolerances of species in the Antarctic and how they might fare in the future?

We know tolerances well for a few species, 10-15.  We know something about another 10-15, but very little about the other 20,000 species of marine invertebrates and fish living on Antarctica’s seabed. The vast majority studied so far have not been able to survive more than a few degrees of warming in experiments lasting over a month.

We don’t know. We know some species are very sensitive to change. It is likely some species will be lost or decline dramatically in numbers. What we do not know is if any of these will be key or crucial parts of the food web or ecosystem, such as krill, and hence have large effects across the ecosystem with impacts on iconic top predators like whales, seals, penguins and albatrosses.

Why are some species better able to cope with changes in temperature and environment than others?

There are several factors here. Species that have evolved in variable environments often have physiologies that are better able to cope when environments change. Species that disperse well and have phases in life cycles where they migrate or disperse over long distances can colonise new areas that are suitable for persistence.

Species with fast life cycles and that have large population sizes and produce many offspring when they reproduce all have advantages in terms of their ability to produce positive genetic changes. Think of a species that has a generation time of 20 years or more such as elephants, redwood trees, and many Antarctic invertebrates. If they only produce a few offspring per year, or only reproduce every 2-3 years, then an individual might only produce 10-20 offspring in their lifetime. Compare this with the fruit fly Drosophila that reproduces every month and could produce dozens at each reproductive event, or some temperate bivalve molluscs and worms that can produce thousands of offspring each year.

What are the creatures that are most resilient to change?

Those with rapid life cycles like bacteria or those that produce lots of offspring like aphids, that can change and adapt. In the larger more complex groups, it is those that have the most flexible physiologies and/or behavioural traits such as migration that allow them to cope with the warming.

What are some of the most sensitive to environmental change? Which species are on the edge right now?

Species from stable thermal environments that do not vary much through the year like tropical corals or polar invertebrates, and those with already small population sizes. The ones everyone knows about are species like rhinos and snow leopards, but there are millions of rare species in the oceans, especially the polar ones where very few people go and see the changes that are happening now. We know very little about these rare species and do not know if their populations have fallen below critical levels. Then there are those with extra problems, like removal of habitat, such as amphibians in Indonesian rain forests that are being cut for palm oil plantations. But again, who is thinking of the species that depend on Arctic sea-ice which is disappearing rapidly?

Are you optimistic about the future? Do you think we'll get to grips with climate change before there are catastrophic impacts?

No, I am not that optimistic. The CO2 we put into the atmosphere takes decades to equilibrate and so what we do now will not have an effect until 2040-2050. There are already massive changes going on. Weather extremes are more frequent, more people are dying in heatwaves than in years gone by, the sea level is rising and some pacific islanders are losing their homes. Hot parts of the world are becoming progressively more uninhabitable and human migration is growing. Biodiversity is declining and although we can do conservation in many areas, there are massive parts of the globe where we do not have the capacity to solve the problems. Biodiversity is being hit and we are losing species that would have likely been of value to us in future (many medicines have come from natural products, much biotech is based on discovery from biodiversity), without the intrinsic loss to humanity of biodiversity loss.

This is going to get worse, and I think significantly worse. We will not reach our targets. The good news is it looks like we are beginning to try and maybe we will avoid the Earth returning to what it was like when the dinosaurs were around, and global temperatures were 3-5°C warmer than now and there was 2-3 times as much desert area than now.

How have you been faring over the last year during the pandemic? How has your research and broader work been affected?

The pandemic has made things significantly more difficult in several areas. I have four PhD students in their final year and all of them have needed access to laboratories to finish off their work. The restrictions to site access combined with the need to cover lone working in laboratories have been difficult issues to address and the implementation of measures to overcome them has been very time consuming. Add to that, recording teaching materials and putting them into online systems has been a problem. At the same time, management of my group has taken more effort with the needs to be aware of wellbeing and mental health and to put more into those concerns. The list goes on. Almost everywhere there has been a need for more work.

You've supervised scores of PhD students, had many field visits to Antarctica, published countless papers, and delivered numerous projects. What do you enjoy most about what you do?

Seeing new data produced from experiments that changes my view of the way the world works, or having lightbulb moments in discussions with colleagues, or learning something intellectually but then seeing it in action when in the field. Of course, being 15m from a pod of killer whales tearing a seal apart and eating it is exciting, or seeing a species that is just bizarre, like a 50cm sea spider, while diving is stimulating, but the enjoyment comes from the new understanding.

What has been your experience of Wolfson? What do you enjoy most about the College?

I love the inclusivity of Wolfson, and how informal it is. I really enjoy coming in to lunch and being able to sit with anyone and strike up a conversation and learn something that I knew little about.  I also like that it is a relatively new college and is finding its way among the more established and trying to do things a little differently, with a much more diverse approach and encouraging this diversity wherever it can. I feel privileged to be part of it.

You can register for Professor Peck’s Science Society talk on the event page now.