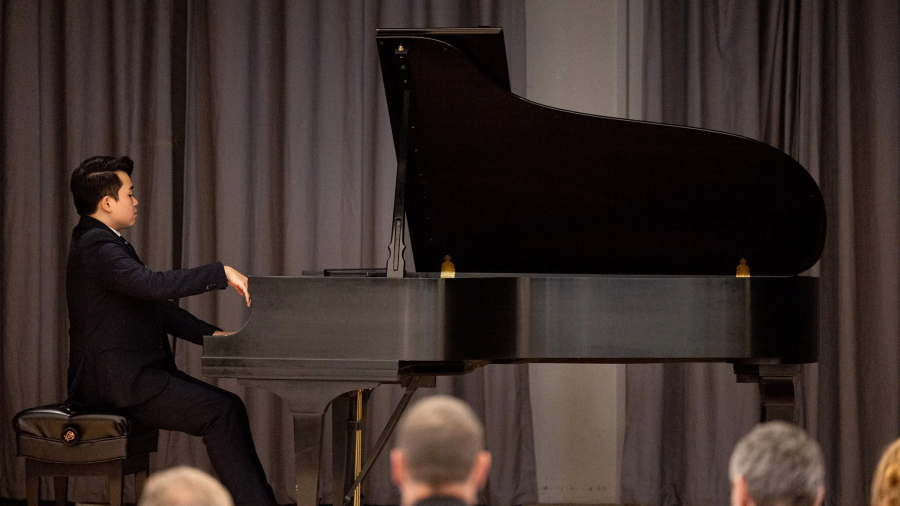 Every year, winners of the Cambridge University Musical Society’s prestigious Concerto Competition perform at Wolfson in one of the musical events of the College calendar – The Mary Bevan Recital.

While Mark Ziying Zang, who began studying piano at four and attended Purcell School of Music before coming to Cambridge, performs repertoire including the Sonata-Idyll in G major by Nikolai Medtner and the Liszt Sonata in B minor.

A decade of star soloists at Wolfson

The Mary Bevan Recital began in 2011 when former Honorary Fellow, the late Professor Hugh Bevan, funded an annual concert in memory of his late wife, Mary Bevan. Mary was a great music lover, and also a Senior Member at Wolfson.

Lyn Alcántara, Wolfson’s Director of Music, enthuses about the opportunity to put such musical talent on display in the College for the annual concert:

“The Mary Bevan Recital brings star soloists to Wolfson,” she says. “They are winners of the most prestigious musical prize at Cambridge.

“The generous donation by the late Professor Bevan allows us to offer a professional fee to these outstanding young musicians. But it’s also down to our facilities – we can attract musicians of such distinction partly because of the wonderful Steinway piano we have in the Lee Hall, generously donated by Professor Linda Wicker, a former Fellow, and Professor Roger Briscoe, a former Senior Member, and both previously members of the College Choir”.

When asked for her highlights, Lyn is clear that it’s impossible to rank such elevated levels of excellence: “They’ve all been outstanding,” she says.

How to attend the 2022 Mary Bevan Recital

No booking is necessary. Admission is free, with a retiring collection shared between Diabetes UK and Wolfson College Music Society.