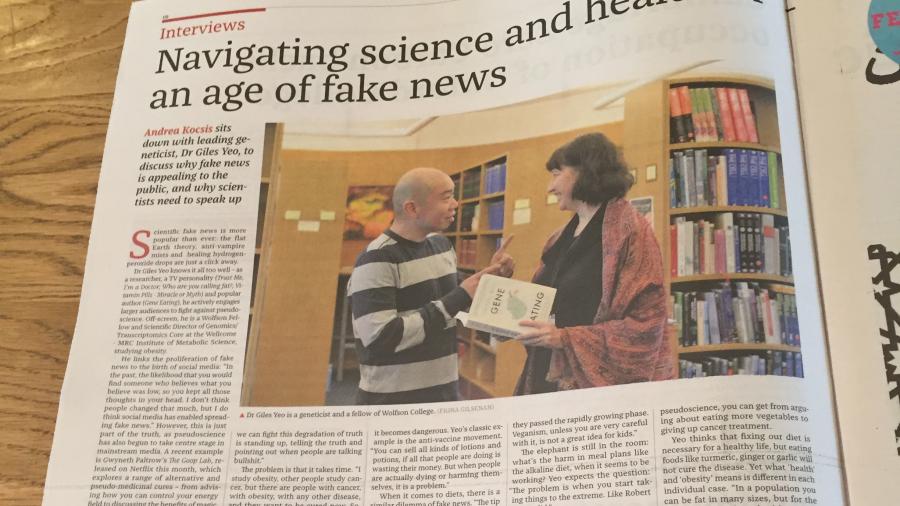 Andrea Kocsis and Jonathan Chan have articles that appear in recent issues of Varsity, both with a Wolfson connection.

Andrea Kocsis is an archaeology PhD student with many interests - she sings in the College choir, rows and is active in the CU Pole Sports Society. She's also a very able interviewer and last week she caught up with the equally busy Giles Yeo to talk about his book, Gene Eating, fad diets and GOOP.

“I know lots of colleagues of mine who think that public engagement is a waste of time,” touching on a particular nerve in his field. “But I don’t think so. It is rather our duty for a number of reasons.” Yeo claims that the low number of people reading scientific papers calls for popular explanation. Secondly, he fears that if scientists themselves do not communicate, then someone that is less of an expert will do so in a poorer way. “And then who are we to complain?” Giles Yeo

Undergraduate English student Jonathan has been in the news before, both for his regular writing for Varsity, and for his directoral debut of last year's play, Atomic Jaya at the ADC theatre, as well as his performances with the University Gospel Choir. His latest piece for Varsity will be of interest to many of our students as he describes his time in the armed services in his home country of Singapore. (Singapore has two years of compulsory military service for men after they finish high school, one reason why so many of our Singaporean students are mature students.)

In his piece, My time in the military, Jonathan talks about the lessons he learned during his time in the infantry, how his religious faith evolved during those two years, and how his fellow Wolfsonians respond to his recounting of his military experiences.

"It is in common parlance in mature colleges to exchange stories of what one did before arriving in university. Given that all undergraduates must be 21 on the day of their matriculation, it is invariable that every person has a different experience to offer in conversation. Recounting my military experiences to my British counterparts in Wolfson was often met with a mix of awe and curiosity, something that became a source of bemusement to me." Jonathan Chan