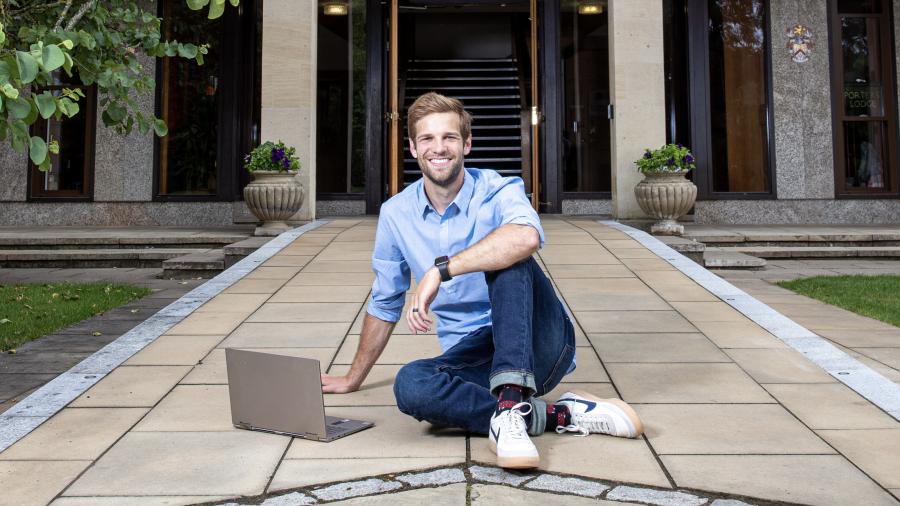 Building owners often put short-term cost before social and environmental considerations. At Wolfson, Caleb Deck developed a tool that might change all that.

“It was miserable in that room. Every day, this place was terrible,” says Caleb Deck, a 28-year-old MPhil student in Engineering for Sustainable Development.

Caleb took his six-month-old son to a swimming class every week for ten weeks back in Oklahoma City, USA, but the air quality in the room was so bad he almost abandoned the sessions. At the time, Caleb was a licensed mechanical engineer working for an architecture and engineering firm, and he happened to mention his bad experience to an air conditioning vendor.

“They said they’d actually tried to sell the pool company a new air conditioning system; it was going to be 100% outside air, and it would have saved them a lot of money and energy long term. But it was a 5% or 10% increased cost in the beginning, so they said no.

“I thought, it’s crazy that we can't get past a 5% increase cost. It's going to save you tonnes of money long term by saving energy, it's going to be lower emissions and better for the environment, and it's going to make it more enjoyable for the rest of us while we're in there. But it really comes down to a lot of business owners thinking first cost only. So I started to think about how we could get past that.”

The experience proved to be a lightbulb moment. Soon after, Caleb began a new side project, attempting to collate huge piles of information on economic, environmental, and societal building considerations, and to present them in a way that an average building owner could understand in a couple of minutes.

“I started working on a tool where all the building owner has to do is input the age, location, size and usage of an existing building. And it pops up a screen that allows them to select from a series of upgrade options.

“So you could change your windows, increase your insulation, or add a green roof to your building, and the tool shows the impact through a range of criteria, including your energy use reduction, cost reduction, payback period, and how it affects the people inside the building.

“It gives a holistic view of what those upgrades do in a really fast way that maybe sparks those decisions for average building owners.”

The more Caleb worked on the new tool, however, the more he realised he needed to fill some gaps in his own knowledge before it could really make a difference.

“I felt like, on my own, I wasn’t quite at the stage of understanding the environmental and societal side of things as well as I could, and so I decided to get a bit of specialisation when it came to holistic design processes and green building design specifically."

“Thanks to a Facebook algorithm, I stumbled across the Engineering for Sustainable Development MPhil course at Cambridge, and I saw the potential there. It’s an engineering programme that looks at the long-term impacts of engineering decisions through the lens of economy, environment, and society, and examines how they interact.

“That was exactly how I wanted to work with future building design: to understand, not just the economics of things, or even just the environmental side of things, but how it affects people as well.”

What followed was a classic example of a successful applied project, of a mature student identifying a problem and coming to Wolfson to fix it. Caleb used his embryonic tool as the basis for his dissertation and, following a survey of related literature and global sustainable building practices, he advanced the tool to such an extent that, over the last year, he began testing it on business user groups.

“It’s been really effective so far. People have enjoyed using it and seeing the impacts that it can have. I've received some really good feedback on it, some ways to change it and upgrade it.

“I'm in the process of recoding some of those things now, but I hope to have it ready in the next year or so for more public usage. I am tossing around a lot of ideas of what I'm able to do with it in the future, whether it becomes something that the company I work for can use to stir up ideas, whether we share it to the industry, whether it's utilised on a subscription basis, or maybe the government is interested in buying it and utilising it as a tool for the industry. There are a lot of options”.

Caleb’s tool could help to green up an industry that contributes almost 40% of global energy-related CO2 emissions.

“It’s getting worse and worse every year,” he says. “For every dollar spent on a sustainable construction application, 37 dollars are spent on conventional construction. So at the moment it’s not looking great.”

It’s not looking particularly great back in Caleb’s home state either, he says. “Oklahoma doesn't even enforce the national energy codes. It really is like the Wild West. You can build anything out there and carbon emissions are not considered a factor.”

The problem, says Caleb, is part economics, part ideological. “Oklahoma is very strongly Republican, it’s very strongly oil and gas fossil fuel industry based, and so climate change is seen as something that's either a misnomer, not true, or not important at all.”

Growing up in the State, however, Caleb believes he has a unique advantage to help change minds. “It's really been since coming to Cambridge that I have more academic rigour behind my understanding of the environmental impacts that we've seen lately. Knowing that this is the future of where the industry is going, where the future of our world is going, I feel better able to bring that understanding to a place I know. I grew up around that anti-climate change perspective, and I think that hopefully gives me the understanding to be able to reach those people who are probably the most reluctant to receive that information”.

Caleb has certainly met like-minded people at Wolfson. “The first day we got here, and we were out of isolation, I met another international student, a film major, and we started talking about different things we’d read recently. We discovered we’d both read a very obscure and in-depth book on infrastructure planning. It's a very niche topic and in my whole life I never expected to meet someone else who would have read this tiny book about Robert Moses.

“It’s the weirdest thing! This guy is a film major, he's not interested in transportation or anything, he’s just interested in things. I think mature students have a greater development of that kind of generalised interest, of how what they’re doing might interact with what someone else is doing.”

Nowhere is this better exemplified than in the Sustainability and Conservation Research (S&C) Hub. Caleb immediately found in the S&C Hub a place where he could share and develop his interest in sustainability with members from across the entire Wolfson community.

“I’ve been really involved in the S&C Hub throughout the last year,” he says. “I think it's a great way to connect with prospective students too, because I got involved before I even moved here, as well as engaging current students and reaching out to alumni.

“I'm really excited that even though I’ve finished the course, I still have in the S&C Hub an avenue through which I'll be able to connect to those people who are interested in learning and intrigued by knowledge.”

In the meantime, Caleb has headed back to Oklahoma with his wife and two-year-old son, who came with him on this “adventure” to Cambridge, living onsite at Wolfson as a family. Despite the challenging backdrop of climate change scepticism in Oklahoma, he’s optimistic about the professional world he’s returning to.

“Prior to coming to the College to do this programme, I was unsure of the industry’s interest in sustainability and what the reception would be when I returned home to Oklahoma. The company I was working for, and the companies in my region, weren’t yet focusing on sustainable design and construction. But as I was planning my return to Oklahoma and finishing my research interviews, I heard from many companies who said ‘we know that sustainability is the next big thing, and we know that in order to stay effective, we need to be on the front foot with this.’

“The company I am returning to even laid out a plan for their vision of sustainability which corresponds well with my learning and experience, and which I believe will lead to an incredibly exciting future.”

This is an article from the latest The Wolfson Review, our annual College magazine. You can read more stories and find out all the big news from the last academic year at College on our Wolfson Review page.