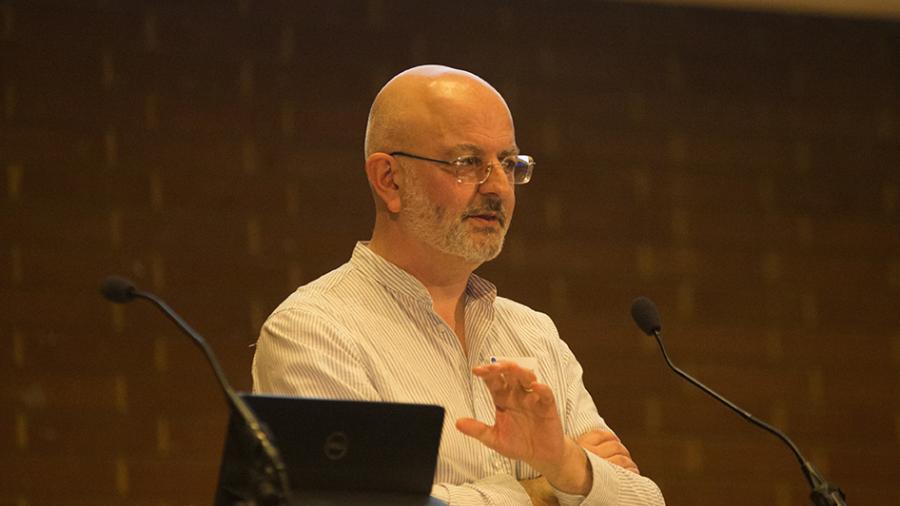 One of Wolfson's newest Fellows, Professor Paul Ramchandani, says we don't know what the effects of the coronavirus crisis will have on children and adolescents, but it's important to keep play in the picture.

When the call went out in 2017 for the first LEGO Professor of Play at Cambridge University, the job description specified a candidate with an "outstanding research record of international stature" and "vision, leadership, experience and enthusiasm". But the candidate should also be "an academic who is playful, extremely curious, open-minded, imaginative and creative  someone who can think of new ways of doing research and working across disciplines." The role was widely heralded as a 'dream job' by many who speculated that it would involve building LEGO sets all day. But Professor Paul Ramchandani is quick to point out that play can be serious business.

"The goal at PEDAL-Cam is to assemble the best research to answer important questions in child development and education. We do much more conventional research than most people perceive," he says.

Paul, who recently became a Fellow of Wolfson College, originally trained as a medical doctor in Southampton and then in public health at the London School of Hygiene and Tropical Medicine in London and in child and adolescent mental health in Oxford. He was awarded the role of Professor of Play in 2017 and serves as the head of Play in Education, Development & Learning (PEDAL) at the Faculty of Education.

The Danish LEGO Foundation, which funds both PEDAL and Paul's position, "does a lot of innovative research and humanitarian work," says Paul. They are a family business, founded in 1932 by carpenter Ole Kirk Kristiansen and called LEGO after the Danish words 'leg godt', which means 'play well'. Much of their focus is on the role of play in childhood development and PEDAL's research hopes to inform policy and practice in education, international development and psychology.

For instance, Paul has reservations about the appropriateness of formalised education on younger children. He says that children's development needs should be the priority in early years, and sitting in structured environments for long periods is not suitable for all children. In his psychiatry practice he has seen a lot of children who struggle due to an inability to focus in class. Perhaps for these children, play-based learning may be more appropriate until they are ready to adapt. "There are big gaps in our knowledge of the role play should have in early education. Those are the kinds of questions we are trying to answer," he says.

Play in the time of COVID-19

Those with children have extra challenges when home working and although many children will enjoy all the extra attention from their parents, they will also have to interact with their parents or carers as part-time teachers. Paul says that play is an important way of learning during lockdown.

"Play must be a priority at this time because it helps children navigate complex emotions."

In a new article by Donna Ferguson in the Guardian, Paul says, "we do know that children being able to play freely is associated with better health outcomes and potentially lower stress."

Research efforts are underway to evaluate the effects of the pandemic on child and adolescent mental health but not much is known at this point. On the one hand, younger children may enjoy the extra time they get from their parents. On the other, children are likely to have new worries such as a fear of going outdoors, and they may miss peer interaction.

"There are some new studies coming out of Oxford and Canada that seem to have robust data about how children are faring, but we can't draw any conclusions yet," says Paul. "One thing we do know is that stability in the family home is best for children's mental health, so families that are already struggling with issues such as depression or family breakdown are going to need extra support. A concern is that people will not seek help for acute mental health problems because of the current crisis. The NHS is still available to treat mental health problems and I would urge anyone who is struggling to contact their doctor."

Paul continues to work as a Consultant Child and Adolescent Psychiatrist in the NHS and he has had to "up his hours" during the coronavirus and. Like many, he is using a remote set up to communicate with his patients.

Paul knew of Wolfson before he was made a Fellow. "I knew about its ethos and the fact that it has mature undergraduates and postgraduates," says Paul, who supervises Master's and PhD students at PEDAL. "I like the approach at Wolfson of broadening the reach of education." Paul attended his first Fellows' Night in February, but of course he hasn't had an opportunity to spend much time at College since. We look forward to seeing more of him when normal College life resumes.

Paul is on Twitter where he often recommends resources for both researchers and tools for parents. PEDAL also has a lot of good suggestions for how to keep your household playful.

Wolfson's LEGO model of the Plodge can be seen on Instagram.