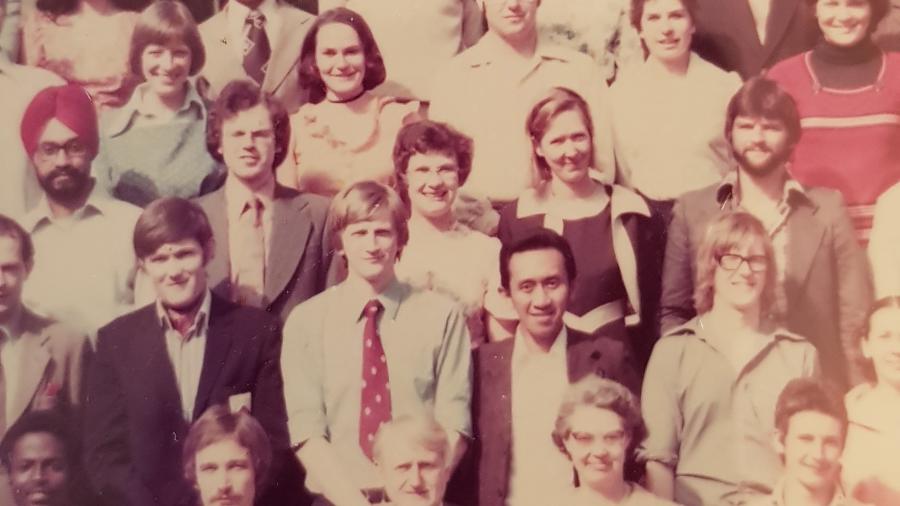 As part of our popular (Ancient) Warfare Wednesdays webinar series, Professor Stephen Hodkinson (PhD Classics) will enjoy a virtual homecoming when he presents his research on Sparta. After all, it was at Wolfson where he met his wife Hilary — and the family connection continues.

When Stephen Hodkinson came to Wolfson in 1975 to do his PhD, his supervisor Professor Sir Moses Finley was at Jesus College, and Stephen thought he might join him there. But Sir Moses was "a firm believer that postgraduate students flourish better at a postgraduate College" and, because he was also a good friend of then-President John Morrison, he recommended that Stephen study at Wolfson. It turned out to be a fortunate choice in many ways, not only because Stephen has become an expert in his field, but also because it was at Wolfson that he met his wife, Hilary (née Lucking). Now, forty years later, their daughter Joy is midway through the Graduate Course in Medicine.

Stephen arrived at Wolfson from the University of Manchester at a period he calls 'fortuitous' within the field of Ancient Greek historical study. Although a great deal of scholarship had been devoted to the period, Sparta itself had been relatively understudied during the previous generation.

"I could see that there was a lot of scope for original research and that I could make a real impact in the field,” he says. “It was only later that I realised that the reason historians had avoided Sparta as a research topic was its appropriation by the Nazis. After World War II was effectively a taboo subject in much of Europe, and it was only just beginning to open up in the late 60s and early 70s."

Stephen's scholarship has subsequently revised this misappropriation of Spartan culture, although in some parts of the world it continues to be abused by right-wing groups, a misguided historical interpretation that Stephen continues to oppose.

Getting the story straight

One of the reasons Sparta is challenging to research is that the amount of archaeological evidence in relatively limited. The modern city of Sparta (of which Stephen is an Honorary Citizen, thanks to his "global contributions to the history of ancient Sparta") was built largely on top of the ancient city when it was re-founded in 1834 after Southern Greece was liberated from the Ottoman Empire. In antiquity too the Spartans constructed fewer striking monuments than many other Greek cities. The historian Thucydides (c 460-400 BC) said of Sparta that if a future visitor was to visit its ruins they would hardly believe how powerful it had been.

Stephen and Hilary home-schooled several of their five children, and that meant that early in his career they were able to pack them into a camper van and head out to the Mediterranean to do fieldwork. He travelled widely in Greece, getting to know the landscape and building up a sense of the realities of rural life. He has also participated In intensive archaeological surface survey within Spartan territory, involving detailed field-walking to detect sherds and other evidence of past uses of the landscape.

Most of the evidence for Classical Sparta (roughly the 5th and 4th centuries BC), however, comes from literary texts in diverse genres. The problem is that they were almost all authored by non-Spartans, especially by writers living in Athens, Sparta's imperial rival, or by writers like Plutarch living several centuries later. This led to a phenomenon known as 'the Spartan mirage', a tangle of distorted and sometimes even invented images of Spartan society, some over-idealising, others hyper-critical. Much of Stephen's career has been devoted to critiquing such 'theme park' images, reading between the lines of partisan sources and distinguishing between reliable and unreliable evidence, in order to construct a more plausible picture of this complex ancient state.

In his talk, Greek Warfare and the Spartan Mirage, Stephen will question one aspect of this mirage, an aspect that has been intensified by modern political and intellectual trends since the American and French revolutions. This is the consensus that Sparta was primarily a militaristic society in which war and training for war dominated the lives of its full citizens, the Spartiates. Although Spartan society did hold in high regard certain values which were beneficial in war, such as obedience to authority, a sense of shame, comradeship and solidarity, Stephen argues that those who perceive the Spartans as simply warriors are misinformed - or worse.

"This is currently standard orthodoxy in both academic and popular circles," he says. "Yes, they had a very efficient army, but Spartan life didn't revolve around being in the army. There was far less military training than is normally believed. Spartan citizens were a wealthy, slave-owning elite who enjoyed a leisured cultured life, hunting, gymnastics, socialising, supervising their estates and so on." Wealthy Spartans, including some women, owned teams of horses and frequently won the chariot races at the Olympic Games, commemorating their victories by dedicating bronze statues of themselves at the sanctuary.

The Spartans were also skilled diplomats and maintained good relations with neighbouring states in what scholars call 'the Peloponnesian League', an alliance system which worked to their benefit by preventing those states from siding with the Helots, the Spartans' slaves.

So why have the Spartans been so misinterpreted?

"Certain groups often exploit a famous, but probably apocryphal, saying from the Battle of Thermopylae. When the Persian king Xerxes demanded that the Spartans lay down their arms, the Spartan king Leonidas supposedly replied 'Come and take them'. This is now used as a rallying cry by certain right-wing groups in America, and also by the gun lobby to resist any attempt to restrict their ownership of arms."

He continues, "To some extent, since the film 300 (a 2006 American period action film based on a 1998 graphic novel), even more sinister far-right groups have taken up Sparta. There are quite a few anti-government groups that have coopted history by portraying the Spartans as warriors who were lovers of freedom, which they interpret as freedom from central government."

Stephen has worked with gun-control organisations in the US to try and combat these far-right appropriations. Although he feels that the academic world has come to a more nuanced perception of Sparta, it's far more difficult to convince public audiences. "Popular books tend to lag a generation behind academia, not to mention social media, and there's no way anything I write is going to convince someone from the far right or the gun lobby to change their take on Sparta. The goal is more to try to convince those who might potentially find their views more attractive because of their supposed classical heritage that the far-right's claims about Sparta don't have historical accuracy."

Both Stephen and Hilary were active members of the Wolfson community. He was the Student Librarian, working with the Staff Librarian Dr Brian Mahy, as well as serving as convenor of the College's Ecumenical Committee. Hilary was the Social Secretary and President of the Amalgamated Club (the precursor to WCSA). It was because she was so involved with the College community that she was chosen to hold the train of HRH Duke of Edinburgh (Chancellor of the University and Visitor of the College) during the royal visit in November 1977, when the College was formally opened by HM Queen Elizabeth II. At that time, the College had 220 students, 72 Fellows, and 58 Senior Members.

The main building and the eastern resident block were being built when Stephen and Hilary were first at Wolfson. He remembers, "We were mainly using Bredon House and a rather posh temporary porta-cabin for the dining hall." He remembers lots of theatrical and musical performances, and the Christmas party for families who were far away from their home countries. He also sang in the student choir. "I remember our Christmas concert on 4 December 1976. Benjamin Britten's death was announced early that day, so we quickly rehearsed and sang one of his songs."

He says, "At Wolfson in the 70s there were quite a lot of people who worked in the field of Ancient Greek History. Obviously there was John Morrison, who was a great naval historian of ancient Greece. Moses Finley sent many PhD students to Wolfson, including Dr Jose Ricardo Martínez-Lacy (now a professor at the Universidad Nacional Autonoma de Mexico), and there were visiting fellows from Norway, the US, and Japan." Stephen also remember the great kindness that Dr Hugh Plommer showed to him as a fellow student of classical antiquity. It is fitting then that Dr Cezary Kucewicaz, curator of the Warfare Wednesday series, is so pleased to have his contribution.

"Stephen Hodkinson is among the most distinguished and original thinkers in the field of ancient history and classics. Ancient Sparta continues to capture the modern imagination, and Stephen is the foremost authority on the subject; his work has redefined almost everything we know about Spartan society. Stephen's critical approach to the overly militaristic portrayal of the Spartans, in both ancient and modern media, in many ways epitomises the role of history and its importance as an academic discipline. On a personal note, I have been heavily inspired by Stephen's work since my undergraduate days and could not be more excited about him "coming back" to Wolfson as part of the Wolfson (Ancient) Warfare Wednesdays series." - Dr Cezary Kucewicaz

Stephen was offered a post at the University of Manchester midway through his doctoral studies, and he put his PhD aside for several years while publishing on other subjects, before finally completing it in 1992. In 2003 he became Professor of Ancient History at the University of Nottingham, where he founded the Centre for Spartan & Peloponnesian Studies and was Director of the Institute for the Study of Slavery. Hilary, meanwhile, has had a varied career as a botanist, ecological consultant, gardener and property entrepreneur.

Stephen is now retired as an Emeritus Professor of Ancient History, but feels he is probably more active in research and impact than when he carried a full teaching load. Besides publishing on Sparta and War, he is also editing the Oxford Handbook of Greek and Roman Slaveries. Beyond that, he is enjoying time with his six grandchildren.

Main photo: Stephen and Hilary are in the third row from from the bottom, second and third from the left.