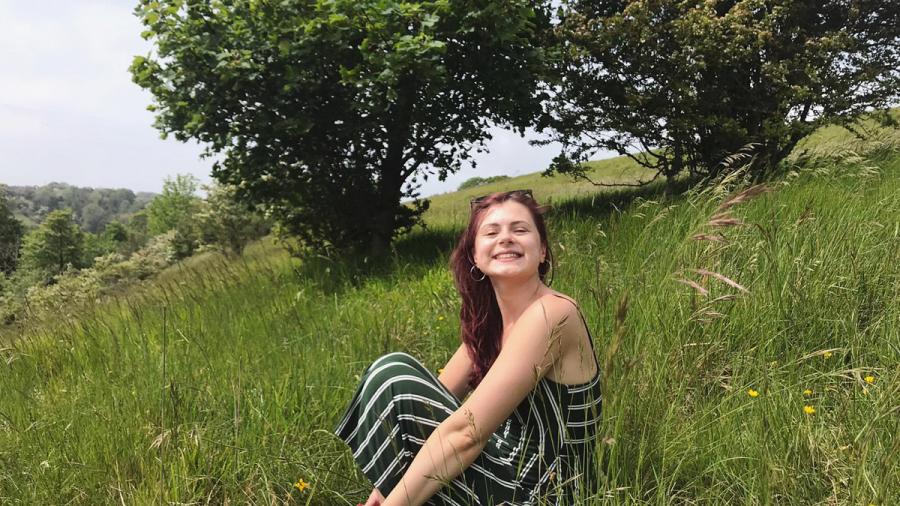 Megan Coe didn’t expect to end up in Cambridge. At 15, she was hit by debilitating ME and spent a year out of school.

“There was a stage when I couldn’t leave the house or walk, or do anything that required any kind of focus,” she says. The condition persisted until she was 23 and it left a weight of mental health impacts.

Now on the cusp of turning 27, however, Megan’s life couldn’t be more different: a first year undergraduate studying Human, Social and Political Sciences (HSPS), Megan is the Wolfson College Student Association (WCSA) Welfare Officer, a mentor on the CB Mentoring scheme, the host of a podcast called Shade in Cambridge, and is a breathlessly active part of College life, signing up for College initiatives from Diversity and Inclusion to Let’s Talk About Race and Racism.

For Megan, recovering wasn’t easy, but the experience of illness gave her a focus that has shaped her approach to College life and beyond: “It developed my perspective and gave me a lot of insight into the issues people face. I wanted to help people who had been in situation like I was or similar,” she says.

To coincide with Mental Health Awareness Week, we spoke to Megan about taking over as the voice of student welfare during the pandemic and discussed how her own experience has helped in taking on the challenge.

What does a Welfare Officer do?

The Welfare Officer is the student voice for Student Welfare in College. I work with a team of eight welfare reps, and I liaise with the College about welfare issues and organise welfare initiatives or events that might help students.

Each rep represents a different group of students in the College to make sure that everyone’s issues are represented and their voices are heard. We meet every couple of weeks to discuss any problems that have come up or share ideas that can help things.

It must have been tough taking on the role as a first-year student and in a pandemic?

Yes, it’s been a challenge! This year has mostly been focused on the pandemic, and on what we can do to support students, both in College and out.

People have had to self-isolate on site and that’s been very difficult for some students. So we’ve been looking to find ways to make things a little bit easier for people, while also dealing with the issues of the pandemic and lockdown isolation ourselves!

Have you found people reach out during the pandemic?

Some people do reach out and message about things, but I think it has been the inclination of a lot of people to keep things to themselves, because of how difficult everything has been. That’s why the aim of a lot of the things we organised was to encourage people to get in touch with us and join in with things, because it can be dangerous being so isolated. For some people, it suits them, and that’s brilliant. But for a lot of people, they feel isolated and don’t feel they can reach out. We wanted to breach that.

What sort of things did you organise?

I lose track a little bit of all the things, because there were so many and it’s been such a challenging time! We organised Wolfson Walks, which were directed walks around the countryside of Cambridge; weekday virtual hangouts; a virtual welfare tea; Wolfson Pairs, where we matched people up with people they hadn’t met before based on their interests. Pairs worked really well, and I’ve heard about people following up those first meetings, either on Zoom or going for walks. That was fun.

The BAME rep set up chat circles, where people have joined together in safe spaces where they can talk, and I know there’s more of that planned this term. The Men and Non-Binary Reps have done a suicide prevention workshop last week, which went really well, and they’ve also done a workshop on sleep. There have been interactive things that people can join to learn about coping too. And we also did a survey to see if people wanted different support from the College, which was great.

How have you managed to balance such a huge task with your own studies?

It’s hard. There are so many things that I would have loved to have organised, but I just didn’t have time for because I have my studies and other commitments as well. Some things that you think are going to be simple can take so long to organise! But I hope we’ve organised stuff that has helped in some way for everyone.

I’m not very good at not taking stuff on! So I’m really glad that I’ve got a team of welfare reps, because they’re brilliant! They’ll be very often organising their own things pertaining to their specific role. Sometimes nothing will be happening. Sometimes it feels like I’ve spent my whole day trying to sort something out. I’m still learning how to balance it. And I felt the pressure more because it’s been pandemic year.

Yes, that’s with the WCSA BAME Rep, Annoa Abekah-Mensah, and PhD candidate Raquel Scarpa-Gebara, talking about experiences of race and racism in Cambridge. That’s been revealing and a lot of fun. It’s not something I’d ever tried before. We’ve had to pause a bit because of exams, but we’ve got more episodes coming up. Me, Annoa and Raquel are part of the CB Mentoring scheme too, and I’ve also started to get involved in the Diversity and Inclusion initiatives here.

How did having ME impact you when you were younger?

I got quite ill when I was 15. I had ME very severely and I was ill with it until I was about 23. It was very limiting. There was a stage when I couldn’t leave the house or walk, or do anything that required any kind of focus, even if it was just reading or listening to music. I had a year out of school, and then went back, but was still quite ill.

That has a huge impact on your mental health, and even when I got better, a lot of what I had to go through only hit me after I had recovered. I was very up and down for a few years, but then suddenly things got better quite quickly. It was great, but it was very overwhelming – processing everything took a while. Around the time I got better, I lost my best friend Lauren, who had been very close to me and supported me through everything.

Did that experience influence your decision to become Welfare Officer here?

Yes, it definitely developed my perspective and it gave me a lot of insight into the issues people face. I wanted to help people who had been in situation like I was or similar. Part of being ill means you have to deal with certain institutions, and you learn from that and get an insight into things. So if I need to speak to the College about things, I get it a little more.

That’s why I’m studying Sociology and Politics too – because I want to learn to improve things in society in whatever way I can. It sounds really cheesy and quite broad, but that’s what I want to do!

How did you end up at Cambridge?

I worked in retail for a couple of years and saved up some money to go travelling in 2019 to Australia and New Zealand, which was really cool. I met some great people, did a skydive, climbed a mountain. When I came back, I enrolled on an Access course, which is a year-long intensive course – like two years of A-Levels squished into one – in Humanities. I loved it! I had been out of education for so long, so it was a real learning curve. Particularly because when I was at school I did sciences! It was a complete 180!

It was a whole mix of different ages on the course, just like here at Wolfson, people who had all kinds of different paths into education. It was intense! I had lots of essays, and I had to get top grades in all of them to get here! It was mad. It felt like I was playing a video game with one life! I couldn’t screw up on anything!

What made you pick Wolfson?

I picked Wolfson because I loved the experience of having people of different ages and experiences on the Access course, so I wanted to go to a mature college, and Wolfson was my favourite of the ones I looked at. And I got it! And now I’m here!  And it’s great! There are a lot of MPhils and PhDs here – and everyone really mixes, and I really like that.

It’s been an interesting start to life at Wolfson!

It’s been challenging, but I hope the Welfare team have made a difference for people. I am looking forward to Michaelmas Term next year though, when we’ll be able to do normal stuff, and I can find out what it’s like to be a Welfare Officer in a normal year! I don’t know what that’s like!

You can find out more about Mental Health Awareness Week on the University’s Wellbeing pages.

You can read tips and experiences from other people in the WCSA Welfare team on the Wolfson College Instagram.