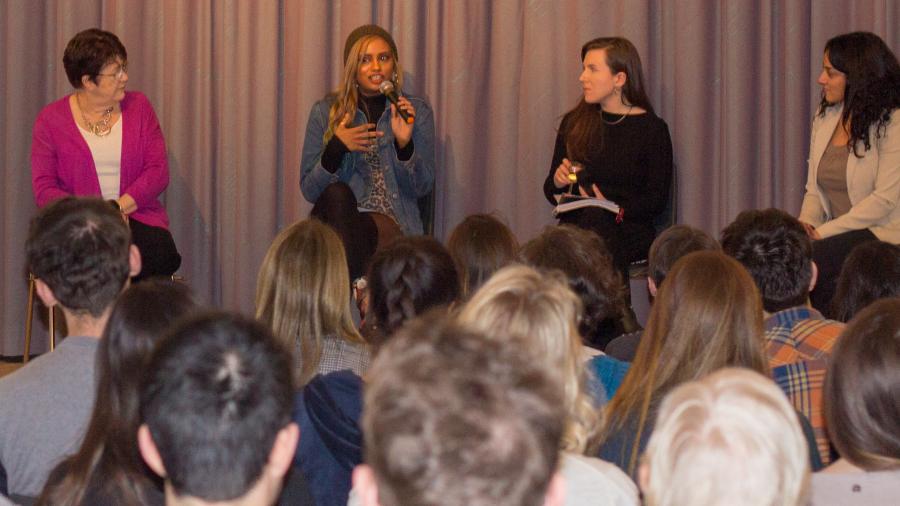 This year’s International Women’s Day was an opportunity for colleges and departments across Cambridge Unversity to celebrate the accomplishments of our female academics, students and colleagues. But against the backdrop of the Breaking the Silence campaign, concerns about equal pay, and #metoo, it was also an opportunity for discussion and debate, and that’s just what happened at Wolfson. WCSA was very active, putting on several events, including a film screening and a female-themed quiz. But the highlight of the week, undoubtedly, was the panel discussion, ‘Imposters or Academics? Women, gender equality and academia’, held in the Lee Hall on 8 March.

Each woman described her path through academia, none of them typical, and the challenges of confidence they faced both from their fellow academics and internally. All three stressed need to perservere through the vagaries of supervision, funding and publishing and shared strategies to help navigate obstacles commonly faced by women pursuing careers in academia, including bias, imposter syndrome, under-representation and the ‘work-life’ balance.

When asked if anyone in the panel had ever “suffered from ‘imposter syndrome’” Rasha said, “Most of the time I feel that the university made a made a mistake. It’s very rare that I feel like I am where I belong.” But in response Jane Clarke pointed out that scientific research is very much about making mistakes and that “if you fear failure, don’t do academia. If you want to do something you really care about, you will keep failing.” She urged, “You can push through it, live with it, learn to laugh.”

In response to the question ‘do you self-identify as feminist and do you feel free to describe yourself that way?’ Azita, who formerly served as President of the Wolfson Feminist Society, acknowledged that some women prefer not to overtly confront issues of bias or inequality in the workplace in order to make small changes, but rather to “keep their heads” down in the hopes of gaining enough influence later on to make more substatial changes in the future.

Having none of that, Jane Clarke said, “I was a feminist in the sixties, why would I stop?” She pointed out that in this previous wave of feminism, there was a feeling that they had “gotten the job done”. But when she returned to Cambridge from teaching in America to re-enter academia, it was like a “slap in the face” how little female representation there was in the department of Chemistry. “But having said that, five years ago at a meeting like this the audience would have been all female. Looking out, at least half of the audience here are men.” Progress indeed.

After the event, the conversations continued over drinks at the President’s Lodge. The organisers believe that the strong turnout and frank exchange of views prove there is real appetite for this type of discussion at Wolfson. Thanks to all who came and participated. #WomenofWolfson