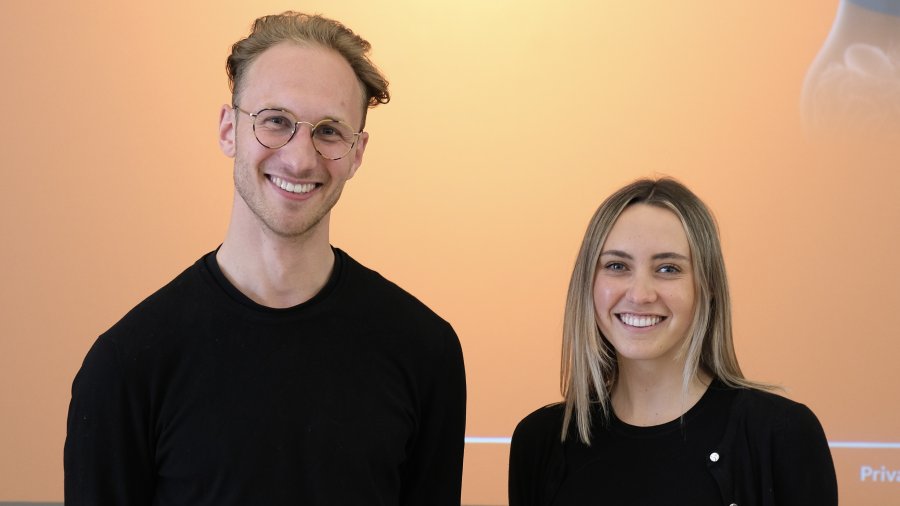 Five teams competed in this year’s Wolfson Enterprise Final in front of a panel of eight expert judges, with Opto Biosystems picking up the top prize.

“Bioelectronics is the future of medicine,” Elise Jenkins stated confidently in her winning pitch. According to Elise, we’ve reached a plateau for many pharmaceutical products, where the development of new drugs aren’t hugely improving the ability to treat complicated conditions such as brain cancer or epilepsy. Bioelectronics on the other hand present exciting new opportunities for diagnosis and treatment, and Elise and Ben's startup, Opto Biosystems, aims to insert a device into the brain to treat serious medical conditions.

"The brain is incredibly powerful and complex, but things go wrong and we need to understand it better."

Elise is a Trinity Hall Engineering PhD student in the Bioelectronics laboratory, Cambridge, and works in the same lab as her start-up co-founder, Wolfson Engineering PhD, Ben Woodington.

“The idea came out of a conversation in the pub” says Ben. “There have been all these amazing breakthroughs in research, but they require massive scale surgeries. We asked each other, is anyone going to get their skull sawn off for this? Probably not, so that’s where the device concept came from”.

Ben’s PhD looks at microfabrication, taking the methods of fabricating devices from the semiconductor industry, and applying it to medical devices. The aim is to create small, thin, flexible chips that can be injected into the body via a minimally-invasive procedure. Once these chips connect with the body’s central nervous system, they can monitor and relay information that could be used to help design treatments.

“What we want to do is deliver a therapeutic device in an outpatient procedure for the first time” adds Elise. "This means no major surgery and no overnight stay in hospital, reducing the associated costs and risks."

“Also, when you take a brain scan in a hospital, you just get a snapshot. Our device is more like wearable monitoring tech, in the sense that you can take readings over an extended period of time, you can monitor brain episodes as they happen, and you can even track brain activity when people sleep”.

It was Ben and Elise's research base as well as the strength of concept that particularly impressed the judges.

“We loved the fact that before they even finished their PhDs, they have come up with a compelling alternative to neural tracking systems at a fraction of the cost,” said Dr Ronjon Nag.

For Dr Jerry Wu, it was the way the team had translated their PhD research into a product with practical applications in the real world. The judges also expressed an interest in talking with Opto Biosystems about potential “angel funding” to help the team test and develop their product.

While Opto Biosystems took first place, Bioinfinity were awarded as runners up for their microneedle skin patch. Judge Anastasiya Giarletta commented that what stood out for her was the innovation of using ingredients from pharmaceutical industry that aren’t currently being used in skin care, which could prove to be more effective.

U Menu was also presented with the “Audience’s choice” award from those watching in the Lee Hall.

The photographs from this event are available on the Wolfson College Flickr.

You can find out more information about the Wolfson Enterprise Competition on our website.

And you can find out more about the winning project on their website.