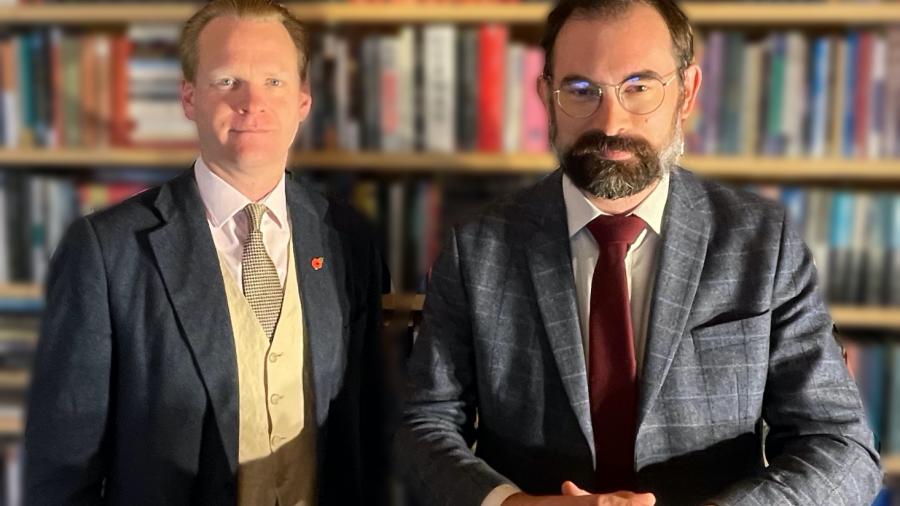 A new book by Wolfson Junior Research Fellow, Dr William Simpson, has been praised as “a fresh, bold, stimulating take on some of the hardest questions philosophers and theologians alike are engaged with”.

According to Anna Marmodoro, Professor of Metaphysics at the University of Durham, the book, Neo-Aristotelian Metaphysics and the Theology of Nature (Routledge, 2021), argues “that only a metaphysics developed on the basis of the Abrahamic-Aristotelian tradition can enable us to understand today’s world of science, the relation of God to it, and our place within it”: a thesis that is likely to stimulate debate. It is nonetheless a book that will prove “a hugely enjoyable read – even for those who will find themselves in disagreement,” says Professor Marmodoro.

Neo-Aristotelian Metaphysics and the Theology of Nature (Routledge, 2021), co-edited with Dr James Orr (University of Cambridge, pictured left) and Professor Robert Koons (University of Texas) is an attempt, says Dr Simpson, “to build bridges between science, theology, and philosophy”. It does so, he says, by “demonstrating how ‘the new Aristotelianism’ changes the philosophical landscape for a number of traditional topics, including God’s action within the world and the place of human beings within nature”.

The book – for which Dr Simpson contributed the first chapter, “From Quantum Physics to Classical Metaphysics” – has been noted too for its ecumenical potential, being a philosophical work within the Abrahamic-Aristotelian tradition which crosses religious boundaries. Dr Simpson is already engaging with other scholars to discuss the significance of the book for Muslim scholars and interreligious dialogue.

Professor Sarah Coakley, FBA, the former Norris-Hulse Professor of Divinity at the University of Cambridge, considers this book to be an important intervention in the discussions around the connection between neo-Aristotelian metaphysics and science and the ‘question of God’.

“Despite its long neglect in mainstream philosophy of science,” says Professor Coakley, “neo-Aristotelian metaphysics has enormously interesting and creative applications for contemporary science, as this new collection of essays amply demonstrates. But perhaps even more importantly, the question of God can then be manoeuvred back into contestation in a way occluded or outlawed by other metaphysical alternatives. This important new book brings together senior and junior scholars to help carve a new trajectory through long-disputed territory."

The Rector Magnificus of the Pontifical University of St Thomas (The Angelicum) in Rome, Professor Thomas Joseph White, OP, has likewise praised the book for its potential to revitalise a philosophical tradition which has been hitherto neglected by theologians: “While scholasticism has been on the margins of Christian theology for some decades, this volume suggests the possibility of a powerful and fruitful intellectual revival. The talented authors of this conceptually well-organized volume orchestrate the use of scholastic principles to analyse some of the most important and difficult questions in contemporary theology, with both clarity and depth. In doing so they delineate a compelling vision of harmony between revealed theology, philosophy, and modern science."

Mark Harris, Professor of Natural Science and Theology at the University of Edinburgh, concurs: "When the Scientific Revolutionaries of the seventeenth century left their Aristotelian homeland for a far country,” he says, “little did they realise that their distant descendants might need to return one day. I have heard much whispered about the promise of neo-Aristotelianism for the science-and-theology enterprise, but until seeing this volume had never been able to grasp the vision. This book will surely be an indispensable guide for years to come, providing lucid overviews of contemporary historical, philosophical, scientific and theological perspectives on neo-Aristotelianism, as well as much original research looking forward.”

Dr Simpson’s chapter, “From Quantum Physics to Classical Metaphysics”, which argues that “Aristotle's doctrine of hylomorphism is ripe for rehabilitation in the light of quantum physics”, is Open Access and you can read the chapter on the Taylor & Francis website.

Dr Simpson has talked more about hylomorphism in an interview with Wolfson College on our website.

You can find out more and purchase Neo-Aristotelian Metaphysics and the Theology of Nature on the Routledge website.

And you can read more of Dr Simpson’s papers on his academia page.