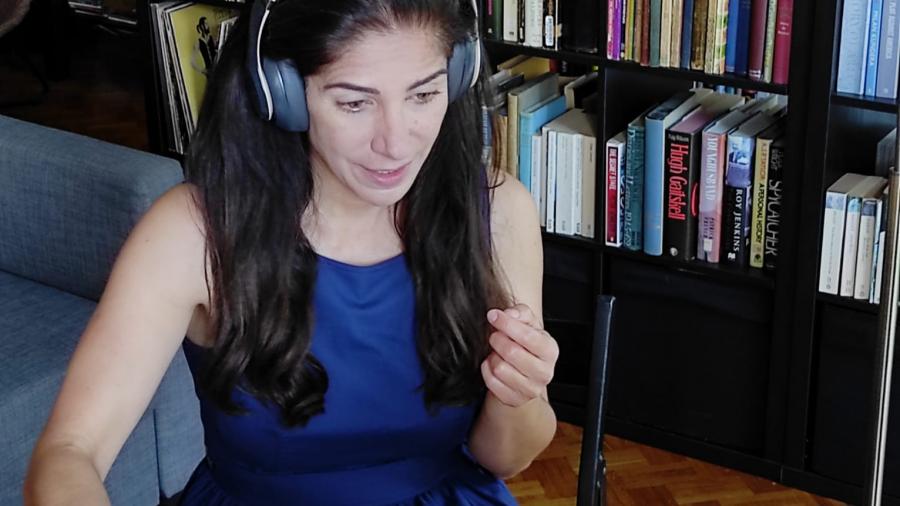 Raquel Scarpa-Gebara had started a PhD in Neuroscience at the University of São Paolo in 2005 when “life took a difficult turn”. Ten years later, she returned to Wolfson on a mission to make an impact in education reform.

After the father of her two children became ill, Raquel Scarpa-Gerba relinquished her ambitions for neuroscience research to focus on her family. She became a full-time carer on top of being a mother and the family breadwinner.

“This type of life experience means it’s extremely hard to think of yourself when making choices,” she says. Raquel moved into teaching at a secondary school in Brazil, but rather than being frustrated by the sudden directional shift, it proved to be an inspirational change.

She became a passionate teacher of biology, a curriculum coordinator, and school auditor. She also grew keenly aware of the need for reform across the education system internationally, and in 2015, ten years after she had withdrawn from her Neuroscience PhD, one experience sowed the seed for a return to study with a totally different focus.

“As a school auditor, I came across the education reform in Kazakhstan and was fascinated by it. I discovered that a research group called Education Reform and Innovation of the Faculty of Education at the University of Cambridge had been deeply involved in implementing that reform. I decided that I would come to Cambridge and study that education reform from the people who had played a major role in it 25 years ago.”

Raquel applied for an MPhil programme in Educational Leadership and School Improvement (ELSI) and arrived at Wolfson with a clear ambition to deepen her understanding of educational reform and explore the possibilities of monitoring and evaluating education initiatives.

“I was driven by a desire to somehow contribute to education reforms and initiatives, and, if possible, help disenfranchised students by proposing network interventions in the systems they’re in."

"My previous professional experience had given me a lot of on-the-ground insight into initiatives for change in organisations linked to education. For example, because I chaired school audits in many countries before coming to Wolfson, I saw teachers all over the world struggle to serve their students the best way possible while, at the same time, serving administrators that reduced their job to test scores. I also saw schools with very limited resources offer amazing education which is not recognised in the mainstream international evaluation systems.”

Making the leap back into learning

Raquel was on a mission to make an impact, but it still wasn’t an easy decision to return to university. “Being here at Wolfson means being away from my son, not to mention the financial investment. It was only possible because I have a partner now, Simon, who takes care of my son when I’m in Cambridge. Also, my daughter has her own life now, and doesn’t live at home anymore. We’re all together as a family whenever we can, but it’s hard. I worry that my son will look back and think that I neglected him in his final years of secondary school. I hope not. I hope that he will see my effort as an inspiration.”

The transition back into full-time education is a challenge for anyone, and Raquel was at first concerned she might not be adept at research in social sciences, having only had previous research experience in experimental sciences. That fear quickly dissipated.

“I worked really hard and learnt so much during my MPhil year here at Wolfson. At the end of the year, I was awarded an MPhil with distinction and got two academic achievement prizes, one for best dissertation in the ELSI route and another from Wolfson (Jennings Prize, 2020)."

“That gave me the confidence that I had what it took to go further and do a PhD. Plus, I always had the feeling that I hadn’t quite finished the education path I had started years ago. I wanted to finish something I had started almost two decades ago.”

From Romanian teachers to Amazonian fisherwomen

Raquel is now working on her PhD in the Faculty of Education, conducting research in Education Reform, Teacher Learning and Education Impact Analysis. Her research involves designing, implementing and trialling evaluation tools for education programmes and education reforms – and it has an international reach.

“I am currently working with two very different communities: teachers in state schools in Romania who work in rural areas and deal with the challenges of very disenfranchised students, offering them professional development in active learning, on-line learning, and special education needs, as well as action research.

“And also a further education programme for fisherwomen in traditional communities on the Amazonian coast. The programme is being conducted as part of the 'Fish Forever  Programme' for Rare Brazil, an NGO that catalyses behaviour changes to achieve enduring conservation results. The fisherwomen learn strategies of financial literacy that are aimed at enabling them to manage their fisheries' resources collectively and sustainably, moving away from the vulnerability of grey economy. My preliminary data shows that the education programme has also had a deep impact on their own conceptualisation of self, group, and occupational identity.”

These are projects which have a clear and positive impact on individuals and communities. To get this work right, Raquel speaks of an approach that includes “a combination of tools, from qualitative methods, such as interviews, to mathematical modelling in network analysis”.

There are key questions driving her work: how can evaluation tools help education systems? How can those tools be tailored to unique circumstances to create powerful outcomes? And how can social network analysis help us address individual and organisational change? These are questions she is passionate about exploring further.

“I came to Cambridge to fuel my mind, maybe if I was lucky I would leave something behind that would help other researchers, and then I would go back to working in school leadership and school auditing. Now I think I want to use the skills and knowledge I’ve gained."

"For my PhD, I work with the World Bank and the European Commission on education programmes in disadvantaged areas. I work with an NGO that supports further education for women in fishing communities in dozens of developing countries. Through this, I’ve discovered that my research is needed in the field and is more applied than I expected.”

Raquel also discovered that she loved working with students at Wolfson. “My PhD has been much more than my individual research,” she says. There’s no doubt about that. She is part of Wolfson’s Let’s Talk About Race and Racism initiative, uniting Wolfson students, fellows, admin, staff and alumni to discuss issues and propose initiatives related to racism and anti-racism. As part of that initiative, she proposed and co-created a podcast called ‘Shade in Cambridge’ to air the stories, perspectives, and experiences of Black and minority ethnic voices in Cambridge.

She is part of a collaboration between Wolfson and a charity called CB Mentoring that offers mentorship and school tutoring for Black and Asian young people in and around Cambridge. She is on the steering committee reviewing the College’s diversity and inclusion guiding statements. She presented her work at Wolfson’s International  Women’s  Day Conference in March. And she is also part of the rowing club, having rowed with the W1 and W2 crews this year.

“Let’s Talk About  Race and Racism for me was the venue that I needed to realise that I can generate and implement impactful projects involving racism awareness and anti-racism actions,” she says. “By being involved, I was able to get my ideas off the ground. In my case, I proposed the podcast series and the Wolfson-CB Mentoring partnership. Those two projects have taught me the power of listening to people’s personal journeys. It really makes you reflect about your positionality in relation to issues of ethnicity, identity and a sense of belonging.”

Raquel has her own experience of grappling with those issues of identity and belonging. She has Italian and Lebanese heritage, but was born in Brazil and brought up in the UK. “Growing up for me was basically about navigating how to be an outsider,” she says. “Being an outsider in Brazil, in the UK, and, even though I’m also Italian, I’m an outsider in Italy as well!”

She has, however, found a home at Wolfson. “I have two strategies.” she says. “One is to systematically carve time for family and the other is to make an effort to establish a “chosen family” here at Wolfson. I have family Zoom twice a week with my extend-ed family, daily with my partner, and three times a week with my children. I travel to see them whenever I can, and they come to see me in Cambridge when-ever they can.

“The second thing is that I also make an effort to find “tribes” in Wolfson that play the role of chosen family. This has been a very import-ant component of this balance for me because the people I connected here at Wolfson, in a way, supply a family vibe for my life and I think I do the same for them.”

Read our first preview article from The Wolfson Review, featuring an interview with one of the world's leading historians, Professor Wang Gungwu.