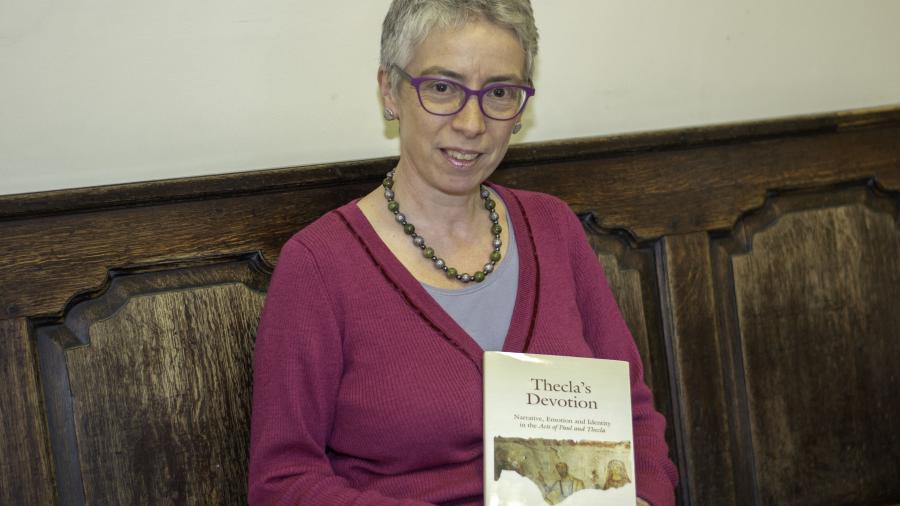 Former Senior Tutor Jane McLarty was asked by her publisher to turn her PhD thesis on an ancient apocryphal into a full-length book.

Jane has been keeping busy since leaving Wolfson after a nine-year tenure as Senior Tutor. An affiliated lecturer at the Faculty of Divinity, she is also teaching at Westminster College and the Institute for Continuing Education. Now she has published her first book, Thecla's Devotion.

Jane's earned a BA in Classics at Girton College, followed by an MPhil in the New Testament. In her PhD work at Kings College London, she focussed on the interaction of early Christianity with classical culture, writing the dissertation that has now been turned into a book published by Lutterworth Press, one of the oldest independent publishing houses in Britain.

The subject of Thecla's Devotion is based on the ancient apocryphal Acts of Paul and Thecla, a 2nd century text (circa AD 180). The Apocryphal Acts of the Apostles describe the journeys of the surviving eleven apostles and Paul as they evangelised for the risen Jesus. Thecla is a young noblewoman who is enraptured by Paul's preaching when he visits her home city, so much that she abandons her family and fiancé in order to follow Paul and live a life of chastity in devotion to Jesus. This life turns out to be quite full of adventure as Thecla travels widely to preach the Gospel, miraculously survives attempts of assault and execution, and makes her way alone across Asia.

In her book, Jane draws together this early Christian narrative and its relationship with the pagan literature of the era, particularly romantic fiction and stories of travel and adventure. Jane weaves together themes of gender and Christian faith in Thecla's life, who rejected marriage and motherhood in contrast to the prevailing norms, preferring instead to teach and spread the word of God. The book also explores the place of emotions and the passions in the construction of Christian identity.

The paperback edition of Thecla's Devotion will be published in February 2019, at which point Jane is likely to prsent at some literary events in Cambridge; we will certainly post news of those when they are confirmed.

Congratulations to Jane on this achievement.